These hot SUVs from Alfa Romeo and Mercedes-AMG are thrilling as well as practical. Which one best puts the 'sport' in SUV?...

It’s based on the award-winning Giulia Quadrifoglio, so we’re expecting great things.

A previous group test winner, the GLC 63 S is the quickest SUV we’ve ever tested.

Why do people buy SUVs? We’d suggest there are two main reasons: a lofty driving position and the idea that your shiny new motor could cross the Sahara, even if the reality is that it’d struggle to free itself from a muddy car park.

But some people just want the moon on a stick, also demanding sports car-shaming performance from their practical two-tonne family 4x4. That’s led us to create a new category for such machines: sports SUVs. Yes, we know that, technically, that stands for ‘sports sports utility vehicle’, but you have to admit the condensed version trips off the tongue rather nicely.

One of our favourite sports SUVs is the Mercedes-AMG GLC 63 S. It’s powered by a thunderous 503bhp twin-turbo 4.0-litre V8, making it the quickest SUV we’ve ever tested. However, the new Alfa Romeo Stelvio Quadrifoglio could well have the GLC’s measure, given that it shares its underpinnings with the superb Giulia and has an equally powerful twin-turbo 2.9-litre V6 under its bonnet. 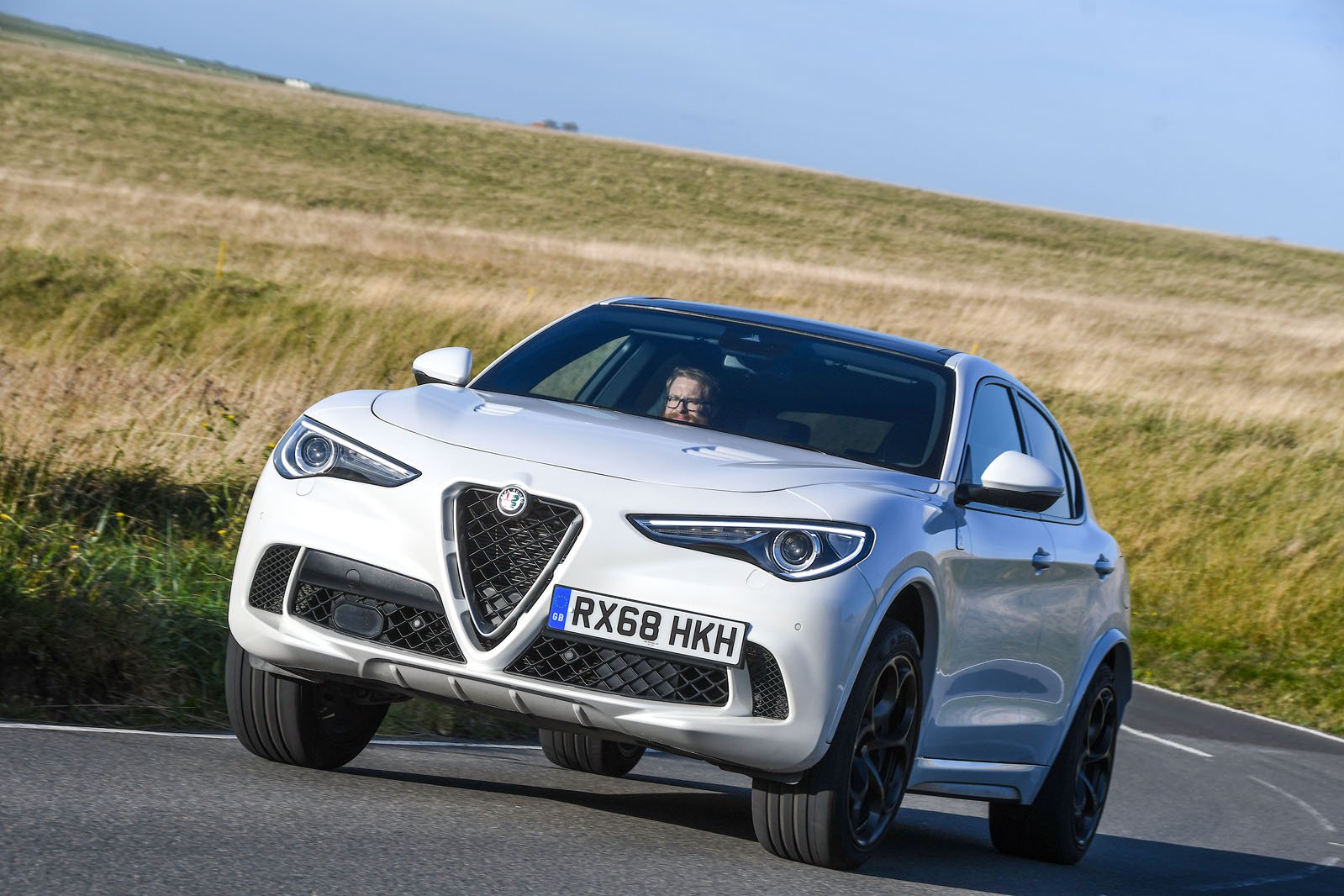 It would seem German horses are more muscular than Italian ones, because while the Stelvio manages 0-60mph in a scorching 3.7sec, the GLC is 0.1sec quicker still, going on to hit 100mph in a faintly ridiculous 8.7sec and pipping the Stelvio to that milestone by 0.4sec. To put that into context, a BMW M2 Competition takes 9.9sec.

But that’s not the whole story. The Stelvio has shorter gearing once you’re above third gear, so in manual mode it’ll accelerate from low revs far harder in fourth and above, although the 30-70mph sprint is covered off by both in an identical 3.2sec. In other words, both feel equally quick at sub-licence-losing speeds.

Such savage performance is no good, though, if these SUVs don’t have the handling to back it up. The GLC is rewarding up to a point, resisting body lean well and even proving quite playful at low speeds. But the stability control is a killjoy, heavily cutting power if it detects a hint of slip at moderate speeds, even if you turn it off. And no, we’re not being hooligans here; this occurs with surprisingly regularity when you’re driving in a tidy yet brisk manner. 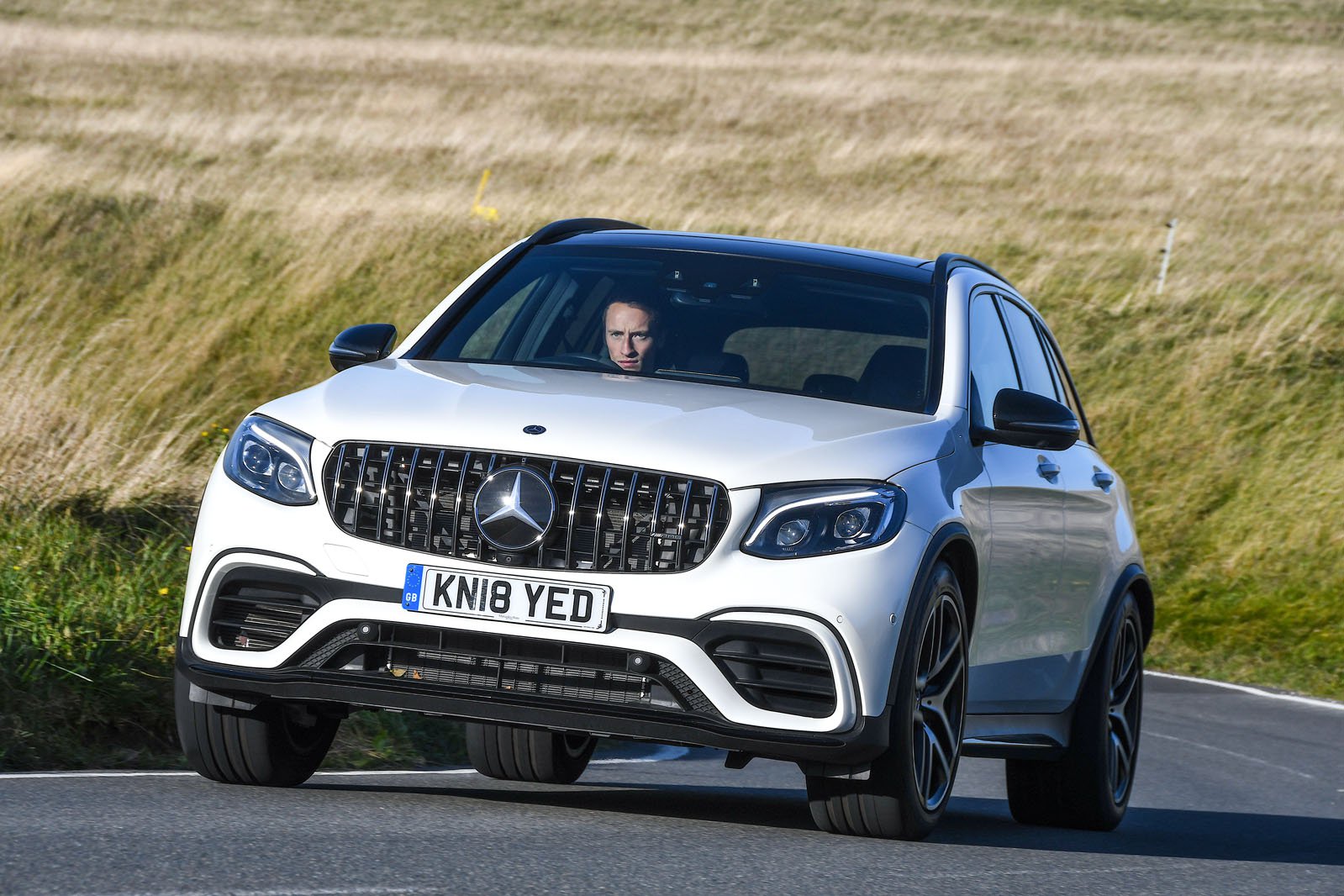 There are no such issues with the Stelvio. The stability control is less eager to kick in and can be fully disabled by switching to Race mode. You’ll find that while the steering is quick, it has a more natural and predictable rate of response than the GLC’s, making the car far easier to place on the road. There’s also less body roll and a sense of agility that belies the Stelvio’s two-tonne heft. You really can have a lot of fun in it.

But naturally, there’s a price to pay. Unlike the GLC, which comes on air suspension, the Stelvio sticks with conventional steel springs and adaptive dampers. With both cars in their most compliant suspension modes, the GLC is slightly more supple, especially on the motorway, although the Stelvio isn’t unbearably firm. You might assume that makes the GLC a better cruiser, but it’s actually the noisier car, with plenty of wind rustle, tyre roar and thudding from the suspension, along with creaks and rattles from the interior.

Thankfully, the noise from the V8 up front is far more pleasing to the ear. It starts off reasonably subtle, but move up to Sport, Sport + and then Race mode and you’ll find its bassy rumble addictive. The Stelvio sounds more like a Ford Fiesta under normal use, but under hard acceleration or in Race mode you’re treated to a fine Italian opera from the quad exhaust pipes.