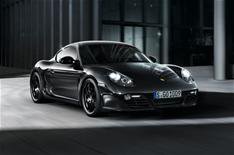 Just 500 of the cars will be available worldwide with UK sales starting in September. Prices will start from 50,420.

Power is up by 10bhp, to 325bhp, which is enough to shave a tenth of a second off the 0-62mph time. The car does the 0-62mph sprint in 5.1 seconds when fitted with a manual gearbox, or 5.0 seconds with a semi-auto PDK transmission.

Fuel consumption and CO2 emissions remain the same as those of the standard Cayman S.

Features such as the black part-leather seats and black dashboard trim further set the Black Edition apart from the standard car. It also gets climate and cruise controls, and Porsche's sat-nav systems, which also includes Bluetooth and MP3 player connectivity.

Customers can get to try out their purchase with a free test drive at the Porsche Experience Centre at Silverstone.