Is a high-spec new Vauxhall Grandland X better value than a lightly used premium Audi Q5 for similar money? Read our test to find out...

Neither car feels particularly fast but that’s to be expected with a sensibly sized 2.0-litre diesel engine. There are subtle differences between the two because the Grandland X has 175bhp on tap and the Q5 is slightly more powerful at 187bhp. The Audi has one less gear in its automatic 'box – seven forward gears, as opposed to the Grandland X's eight – but the Vauxhall puts in the slower acceleration time of 8.9sec to 62mph compared with the 7.9sec of the Q5. This is probably due to the better traction that the Audi has off the line since it can be had with four-wheel drive: the Grandland X will get a part-time four-wheel-drive system when the plug-in hybrid version arrives but, for now, it's front-wheel drive only.

Out on the open road, the Grandland X is the far softer SUV with plenty of body roll in the corners. It subjects passengers to a bit of jostling, too, but for the most part it deals with bumps and motorway expansion joints better than its more stiffly sprung rivals.

The Q5 is certainly firmer, which could upset some people, although it does settle down at higher speeds. Body roll is controlled much better through the corners, so it feels much more agile as a result. You won’t get much feedback through the steering, but this is also true of the Grandland X, which feels vague around the straight ahead and doesn’t have the progressive weighting of the Audi.

Without any options, a Vauxhall Grandland X 2.0 Turbo D Elite Nav will cost you £32,650, although if you use our What Car? New Car Buying service, you’ll be able to get that down to £30,511. A 2018 Audi Q5 2.0 TDI S Line S Tronic with below-average mileage is a little cheaper than that, with many used examples at Audi main dealers available for £30,000 or less.

The Audi will cost you more to run than the Vauxhall because it’s slightly less economical and cost over £40,000 when new, which means you’ll have to pay an extra road tax fee of £320 (until the car is over six years old) on top of the £145 flat rate charge every car registered after 1 April 2017 is subjected to.

According to the latest information in our What Car? Reliability survey, it’s the Vauxhall that gets the wooden spoon in terms of reliability because the brand finished in 27th place out of 31 car manufacturers, while Audi did better and came in 20th. 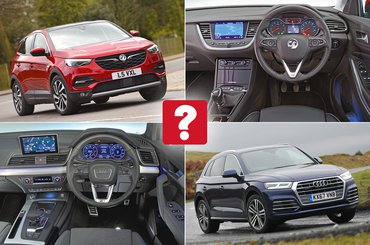