Family estates are all about good fuel economy, low emissions and space. We've tested the Peugeot 308 SW against the Skoda Octavia Estate to see which one is the best... 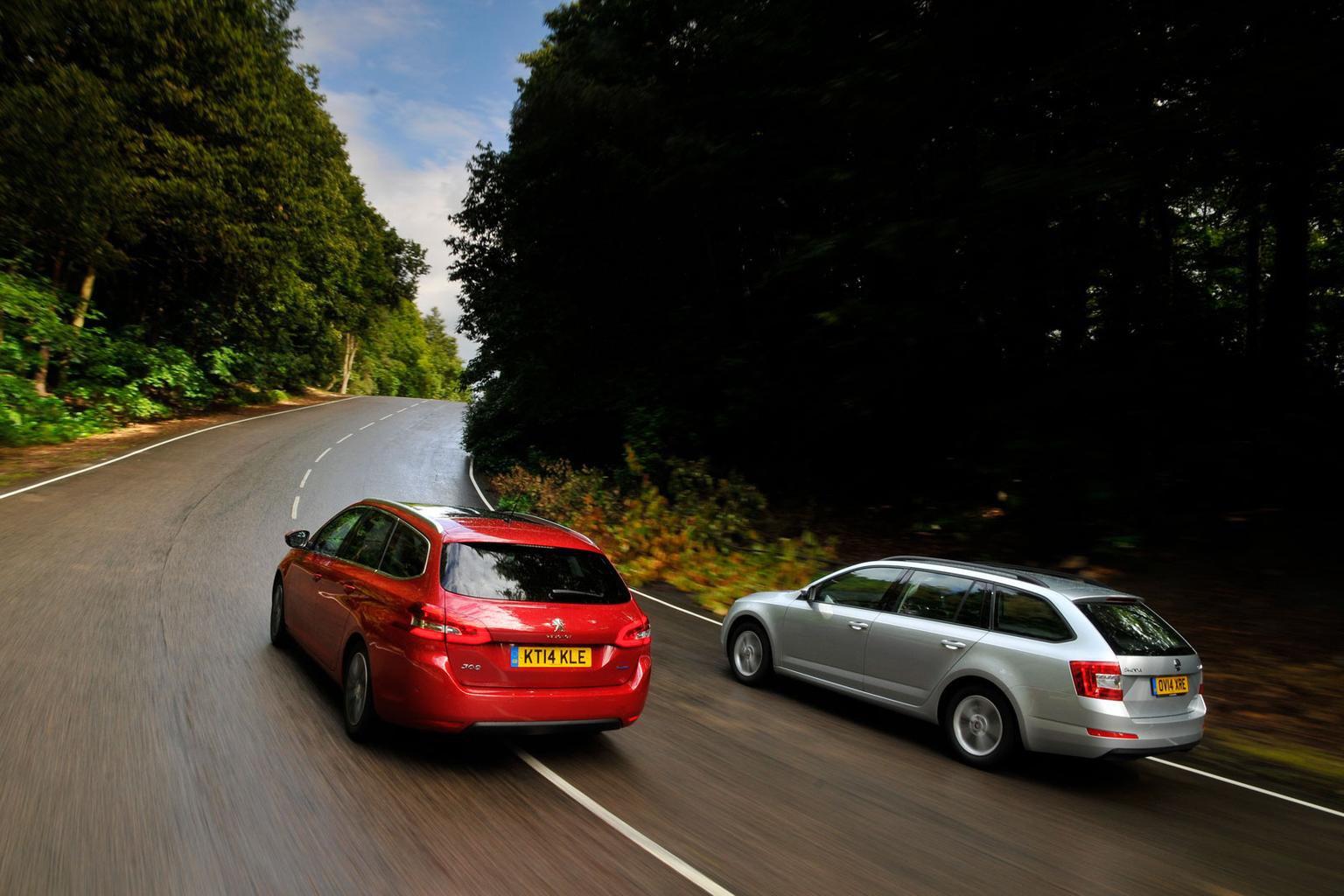 Space and efficiency are hardly rare commodities in modern estate cars, but the new Peugeot 308 SW BlueHDi 120 and Skoda Octavia Greenline III take it to the extreme.

Despite offering huge boots and healthy performance from their 1.6-litre diesel engines, both emit a tax-scrimping 85g/km, which means that even higher-rate taxpayers will pay less than £100 a month to run one.

These two are also tempting prospects for private buyers, with both available for much less than £19,000 once you’ve haggled a discount.

Both cars get six-speed manual gearboxes and tall top gears that keep revs below 2000rpm at 70mph, making them ideal for long journeys.

It’s not quite such easy going around town, though; while both pull smoothly from low revs, the Peugeot’s more sluggish response means you’re forced to change gear more often than you do in the Skoda. That's despite the fact that the 308 delivers stronger acceleration higher up the rev range. Nonetheless, both cars make it easy to slip into fast-moving traffic on the motorway.

Ride comfort is hit and miss in both, but the Peugeot is the more comfortable by a narrow margin. The Skoda deals with speed bumps very well, and is relaxed on the motorway, but around town it’s less settled over scruffy surfaces, and often thumps over ruts and cracks in the road.

Not that the 308’s low-speed ride is perfect, either. It has a similar habit of shimmying over rippled or badly eroded roads, but is a touch less harsh over potholes – although there’s a wince-inducing thump if you hit a big mid-corner bump.

The Peugeot doesn’t handle as well as the Skoda; it leans more through corners and pitches forward more dramatically under braking. While the Skoda is no thrill-seeker, its steering is more precise and feels more connected with the front wheels. The Octavia has more front-end grip, so always feels keener to turn in to corners and is much the more stable and confidence-inspiring when doing so.

Refinement is another so-so area for both cars. Suspension noise is the most irritating element around town, with a resonant background boom creeping into the cabins much of the time – particularly in the Skoda, which also has the gruffer, more noisy engine. However, while the Peugeot’s quieter, smoother-revving engine means less diesel clatter, its gearchange is rubbery and vague next to the Skoda’s light, more precise shift.

Dogs, buggies, garden rubbish, luggage for a week-long family holiday – both the 308 and Octavia have big, square load bays that will cope with the general trials of family life. Low load lips and broad openings make it easy to slide bulky items inside, although the Peugeot’s wider, longer load bay gives it the edge and it also has plenty of practical tricks. Levers in the boot drop the sprung-loaded 60/40 split rear seats flat with no drama, while you also get removable, sliding magnetic clamps and a strap, allowing you to partition the boot.

The Skoda’s boot isn’t without merit. It’s deeper for starters (to both the load bay cover and to the roofline). There’s also more underfloor storage, with two square boxes that will hold a few grocery bags. However, the rear seats aren’t so easy to fold; despite having levers in the boot to release the seats, you still have to shove the backrests to get them to drop, and even then they don’t lie flat. There’s also a step up into the extended load bay.

If you have to sit in the rear seats you’ll want to be in the Skoda, because it has masses of space all round, while the 308 can leave adults feeling short of legroom – and even headroom if the optional £500 panoramic glass roof is fitted.

The Skoda is also better for the driver; a broadly adjustable seat and steering wheel make it easy to get comfortable, while a 5.5-inch colour touch-screen flanked by clearly marked shortcut buttons and air-con controls that are logically laid out also impress.

In the 308 some drivers will find they have to set the small steering wheel uncomfortably low to see the instrument dials. The dashboard, although clutter-free and featuring a vast 9.7-inch colour touch-screen, is less intuitive than the Skoda’s system because of the obscure labels on the touch-sensitive shortcut buttons, which can also be slow to respond. It’s unfortunate that you have to use this screen to control the air-con system; even tweaking the cabin temperature forces you to switch between the various on-screen menus.

Company car costs for both vehicles are exceptionally good for such big family estates, but taking into account changes to benefit in kind (BIK) tax bands over the coming years, the Peugeot will be the cheapest – by a fraction – over three years. Contract hire rates are also lower on the Peugeot, too.

Despite the name, private buyers can opt for the SE Business edition Octavia and, given the price and equipment, it makes sense to do that if you’re buying outright. However, unless you’re a company buyer, SE Business trim isn’t eligible for low-interest finance deals that are offered on other trims, so if you’re leasing privately you may be better off going for a cheaper trim and adding some options.

If you are buying on finance, it's worth asking about Peugeot's ‘just add fuel’ deal, which includes insurance, servicing and road tax as part of the package.

Resale values are predicted to be better on the Octavia, and it sits five insurance groups lower than the 308 SW, which helps make it the cheaper car to run privately, with all costs factored and assuming you sell on after three years.

Standard equipment is generous on both of these estates, with satellite-navigation, a DAB radio, Bluetooth with audio streaming, a multi-function steering wheel, rear parking sensors and climate and cruise controls all included.

However, the 308 also adds automatic lights and wipers, and gives you full control of an iPod or iPhone via the USB connection. Skoda’s standard USB port won’t sync with Apple devices unless you pay £100 for an upgrade.

Paint colour options could put you off the 308, because dark grey is the only standard option – even white costs £200 and everything else is £525. A more cheerful selection of two shades of white, red, or navy blue is offered on the Skoda for no extra charge.

Those not overly concerned about rear passenger space, and who can get comfortable with the 308’s driving position, should consider the Peugeot. It’s slightly more refined and more comfortable than the Skoda, and has a cleverer boot.

However, since rear space tends to be a priority in estates, and the Octavia offers masses more of it, as well as more composed handling and a driving position that will suit all, it has to win.