More for you |
Most reliable used hybrid carsBest used hybrid cars (and the ones to avoid)Catalytic converter theft - why is it so common? Lexus readying first electric car for 2020 launch2019 Toyota Prius AWD-i review - price, specs and release date
Home
News
Toyota Prius and Hilux
news 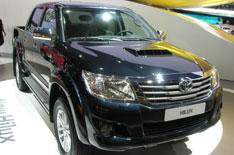 Toyotas updated Prius and Hilux ranges have been revealed at at the Frankfurt motor show.

Updated PriusThe exterior changes to the Prius include re-shaped bumpers and grilles. There are also new light lenses at the front and rear, while daytime running lights have been added.

The facelifted model has redesigned front and rear ends and an upgraded interior, with classier materials and the addition of Toyotas Touch entertainment system.

The model line-up has been tweaked, while two-wheel drive models now get the same more roubust chassis as four-wheel drive versions. The 2.5-litre D-4D diesel engine has an extra 24bhp, but CO2 emissions have been lowered by 26g/km. All versions are now Euro V compliant.

Prices and an on-sale date for the 2012 Hilux are yet to be announced.

FT-86One car that isnt at Frankfurt is the production version of the FT-86 sports car. The rear-wheel-drive coupe has been co-developed with Subaru and has been around in various forms since late 2009.

Theres a new colour scheme for the FT-86 II concept on display at Frankfurt, but the final production model is scheduled to make its debut at the Tokyo motor show in December.

Toyota insiders say that only minor changes will be made for the production car: its likely to have simpler front and rear bumper designs and wont have the concept cars large rear spoiler.