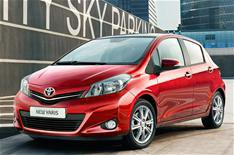 These are the first official shots of Toyota's new Yaris. Pictures of the Japanese version called Vitz have been released, but this is the Yaris that will go on sale in the UK in September.

The new Yaris is longer than the current model and Toyota says that it has developed the original concept of 'compact outside, spacious inside'.

As well as improved space, Toyota says the cabin has a more driver-focused design and higher-quality materials. The Toyota Touch & Go system, which has a 6.1-inch touch-screen display, is likely to be fitted as standard to 95% of models sold.

Prices haven't been announced, but we don't expect they'll differ greatly from the current model, so should start at around 11,000.