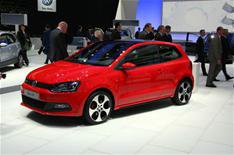 The car will be unveiled at next month's Geneva motor show ahead of UK sales starting in August.

Like the curent Polo, the Polo GTI, has been been styled to look like a mini version of its Golf counterpart. So it gets the similar five-spoke polished 17-inch alloys, and the same style of honeycomb grille with a red frame.

The seats are trimmed in a similar checked cloth material to the Golf GTI's, and there's a flat-bottomed steering wheel, too.

The GTi goes on sale in the summer and will be available as a three and five-door, with prices starting at around 18,000 for the three-door.