All versions are quick; even the entry-level turbocharged 3.0-litre V6 petrol engine produces 335bhp and accelerates this hefty SUV from 0-62-mph in 6.0sec. That said, it’s worth upgrading to the Cayenne S if it’s within budget; its V6 may be slightly smaller (2.9 litres), but an extra turbo pushes it to 434bhp, so it pulls much harder and is a second quicker to 62mph (5.0sec).

The pick of the range is the Cayenne Coupé GTS, which straddles the fine line between sensible SUV and bonkers sports SUV. It uses a 454bhp 4.0-litre twin-turbocharged V8 petrol that’s more than powerful enough to beat most rivals away from the traffic lights and its 0-62mph time is just 4.5sec. Fancy something even more mind bending? Then try out the 543bhp Turbo for size, but even that's not the quickest Cayenne Coupe.

That's the Turbo S E-Hybrid, and it moves quicker than a scalded cat on a hot tin roof. With its 4.0-litre V8 and powerful electric motor, you have up to 671bhp to play with – yes, that's correct, 671bhp in total – and that means 0-62mph in 3.8sec. Wham. And it boasts some environmental credentials, with an electric-only range up to 25 miles officially. The cheaper 3.0-litre V6 E-Hybrid will officially do up to 27 miles on battery power or around 18 in the real world, which is more than the Range Rover Sport P400e and Volvo XC90 T8. And it's about as rapid as the Cayenne S when running the petrol engine and electric motor together.

Most Cayenne Coupés come with adaptive suspension as standard (Porsche calls this PASM if you're trying to decode the brochure). In its most compliant mode it's softer than you might expect, but that doesn’t prevent the car from thumping over potholes and expansion joints. We wouldn’t go as far as to say it's uncomfortable, but it lacks the plush pliancy that other expensive SUVs provide – the Audi Q8 and Range Rover Velar, for instance.

Therefore, we recommend the optional air suspension (standard on the range-topping Turbo and Turbo S E-Hybrid models). The ride still isn't the best in class, but it never crashes or jars. In fact, you'll hear the impacts more than you'll feel them – a common trait of air suspension.

Another advantage of choosing air suspension is that you experience fantastic body control. There's no float, even at high speeds, with any bounce off undulations dealt with really quickly. 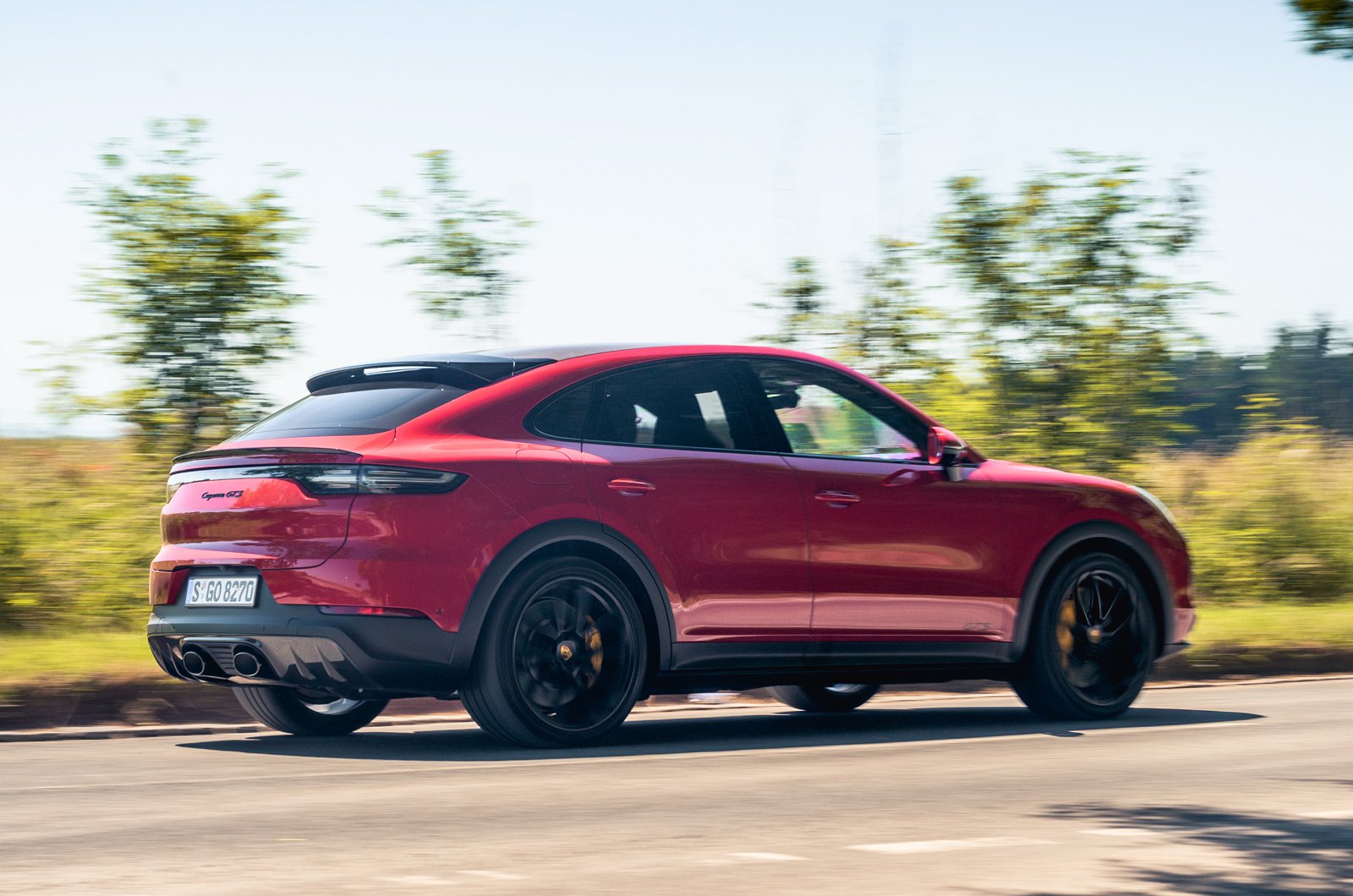 All of the Cayenne Coupés steer sweetly, but the lighter V6 models, as well as the V8 GTS and Turbo models, steer the best. Their steering weights up beautifully through turns and feels perfectly geared, gifting the Cayenne Coupé a precision and fluidity that belies its bulk. That said, you should consider adding the air suspension (standard on the Turbo and Turbo S E-Hybrid) to maximise the car's agility. Even in Comfort mode body movements are kept tightly under control, and there are sportier modes to choose from if you wish that make this a far better driver's car than any Range Rover Sport or Velar.

There’s always loads of grip, but ultimately you’ll feel it run wide at the front first. You can neutralise this by adding a bit more power, and it’s even possible to make the rear tyres slide playfully if you’re feeling fully committed. Few SUVs are this much fun and we think the GTS, with its 20mm lowered sports suspension, is mega.

For the nimblest Cayenne Coupé avoid the E-Hybrid and Turbo S E-Hybrid models – their extra weight (mainly from the batteries) makes them feel more cumbersome. Adding the optional four-wheel steering to any Cayenne brings even greater agility in low-speed corners along with improved high-speed stability.

All the engines are smooth under normal use, including the creamy V6's found in the entry-level model, the E-Hybrid (when its petrol engine is running) and the S. The S is a little louder, but in an appealingly sporty way, while the GTS, Turbo and Turbo S E-Hybrid deliver a smile-inducing, purposeful V8 rumble. All the engines settle into near-silent in the background when you’re cruising.

Unsurprisingly, both the hybrids are borderline-silent when running in electric-only mode, but their brakes disappoint. They stop you effectively, but the system involved in recouping energy – by recharging the battery pack as you slow down – makes the pedal action feels inconsistent and horribly grabby, especially in slow-moving traffic. There is no such issue with the regular models, which offer a very progressive middle pedal that you can meter perfectly.

All models come with an eight-speed automatic gearbox that glides between ratios. Wind noise is well contained, but the typically big tyres fitted to the Cayenne Coupé generate a bit of road noise compared with its quietest rivals, such as the Audi Q8.