The standard seats come with a handle for manually sliding the seat back and forth and a button for electrically adjusting the angle of the backrest. If you want lumbar support adjustment you'll need to order the optional 14-way electrically adjustable Sports seats, or the 18-way Sports Seats Plus, which include adjustable side bolsters. All versions offer a good level of support to hold you firmly in place when cornering. There's also the option of racing-style sports bucket seats, although these have fixed backrests and are a little on the firm side – be warned if you're planning on using your car daily.

The rest of the driving position is just about spot on. The pedals are positioned perfectly and the steering wheel has so much breadth of adjustment that you should be able to get suitably set up. Even the buttons on the dashboard are easy to get to grips with; they may look a little confusing at first but you quickly learn to find them by feel while driving.

Sports cars are notoriously hard to see out of, with thick pillars, small rear windows and a low driving position, but the Cayman is better than many. It’s easy to judge the width of the car, and while the rear screen is small, it still gives a good view of what’s behind.

At night, the standard bi-xenon headlights offer decent illumination. You can upgrade these to ones that follow the direction of steering to help you see better through bends, or go a stage further and opt for the even brighter, adaptive LED headlights. 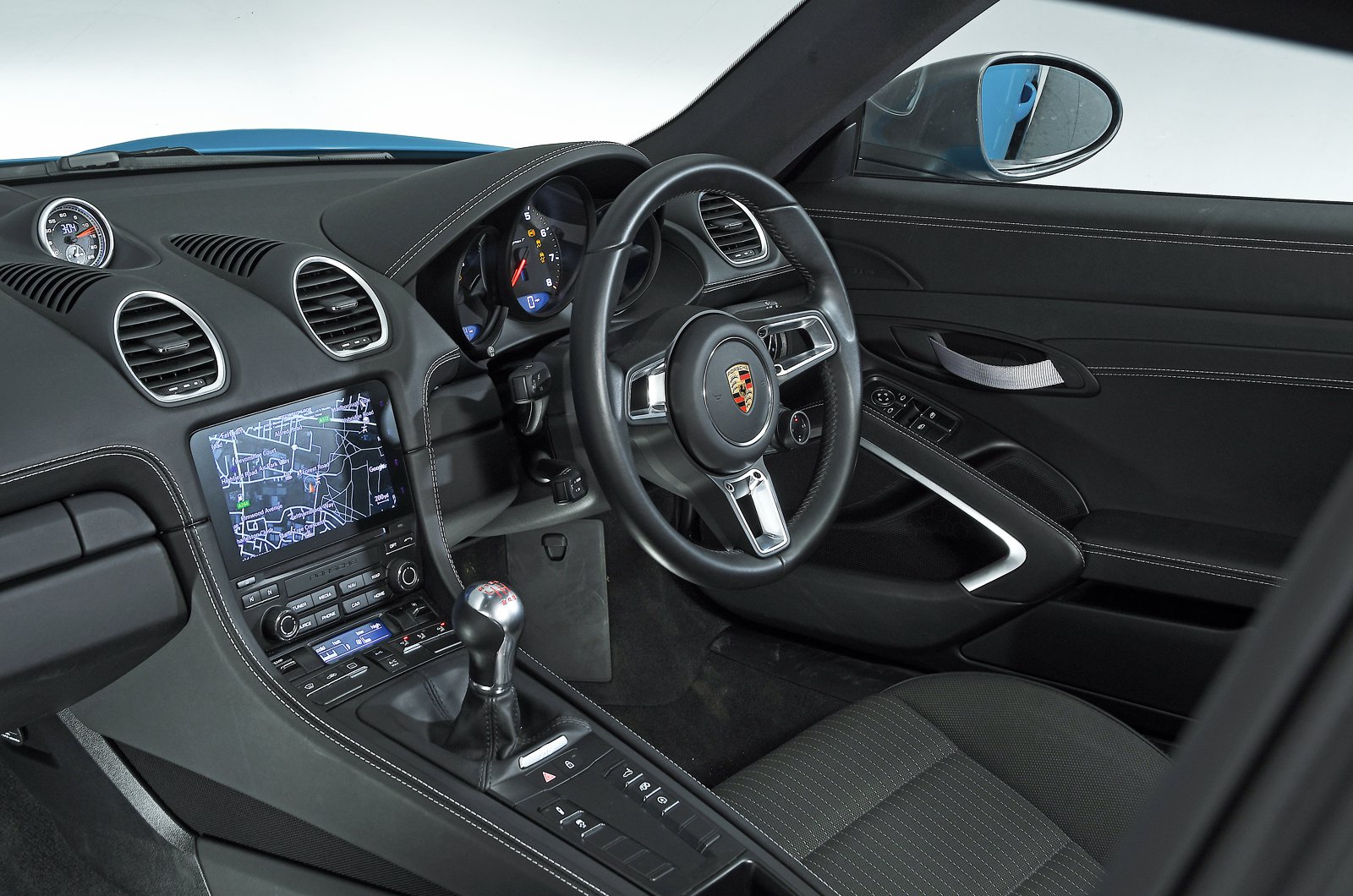 As standard, you get a relatively crisp-looking 7.0in touchscreen, complete with Bluetooth, a DAB radio and sat-nav. It also comes equipped with Apple CarPlay, so you can mirror your iPhone to the screen. If you subscribe to a data package, you can also make use of on-board wi-fi and music streaming.

The touchscreen is within easy reach, quick to respond to your inputs and the menus are reasonably logically laid out, with shortcut buttons to help you find the major functions. However, some rivals' systems are better; the Audi TT's MMI, for instance, is easier to operate on the move thanks to its rotary-dial controller, as is the BMW Z4's iDrive. The Alpine A110, on the other hand, has a dreadful infotainment system.

There are no audio controls on the steering wheel unless (you guessed it) you pay extra, and the standard stereo is a comparatively low-spec system with eight speakers and 150W of power. Of course, you can pay to upgrade to higher-end versions; the first option is a relatively affordable Bose system with 10 speakers and 505W, the second is a pretty pricey 12-speaker, 821W Burmester setup.

Porsche has a reputation for building smart interiors and, although it's not quite up to 911 standards, the Cayman doesn’t let the side down. As standard, you get solid, high-quality buttons and switches, and everything feels like it has been tightly screwed together. Plus, almost everything you touch in the interior is covered in dense, soft-touch materials, while you sit on Alcantara and leatherette-trimmed seats – or part-natural leather on S models.

Spend even more and you can have full-leather seats, a leather-covered dash and door panels, or go to town with additional Alcantara or wood finishes. Even without these fripperies, the Cayman feels far more special to sit in than an Alpine A110 and at least on a par with the more expensive Jaguar F-Type.