The acceleration this offers won’t exactly take your breath away, but it’s a flexible engine, with plenty of pull at low revs all the way to 6000rpm and beyond. In fact, we reckon it’s a good enough performer that you won’t feel compelled to step up to the more powerful (and crucially, more expensive) 148bhp version of the same 1.5-litre engine (badged 1.5 TSI 150). Mild-hybrid versions of the 1.0 and 1.5 TSI are available (we’re yet to try them), but no diesel is currently offered.

Finally, at the top of the tree there's an eco-friendly plug-in hybrid, creatively named the eHybrid. It uses a 1.4-litre petrol engine (shared with the Volkswagen Golf GTE) with an electric motor that bumps up the power to an impressive 201bhp. With a 0-62mph time of 7.5 seconds it's not quite as quick as the more performance orientated GTE (6.7 seconds) or the Mercedes A250e (6.6 seconds) but it still feels pleasingly rapid in the real world. It also offers an official electric-only range of 40 miles, putting it in the same company car tax bracket as the more expensive Mercedes (there’s more on that in our costs section).

On its standard suspension, the Leon won’t rattle your fillings out and is compliant over large undulations, such as speed bumps, but it fails to be quite so absorbent over rough town roads or pockmarked A-roads.

Meanwhile, the popular FR models come with sports suspension as standard. This is obviously intended to help the car dart around corners, as we’ll come on to discuss in the next section, but it also has an impact on ride comfort. You certainly won’t be wincing every time you hit a drain cover, or taking the long route home to avoid speed bumps, but you will feel big impacts more than you would in a Volkswagen Golf, and you’ll notice yourself being jostled around in your seat along even relatively smooth roads. Optional adaptive suspension is available but only on range-topping FR First Edition models.

Plug-in eHybrid versions are the least forgiving Leons along pockmarked roads, due to how the extra weight of the battery makes bigger demands of the suspension. If you’re after a comfy PHEV for similar money, we’d point you towards the Skoda Octavia iV. 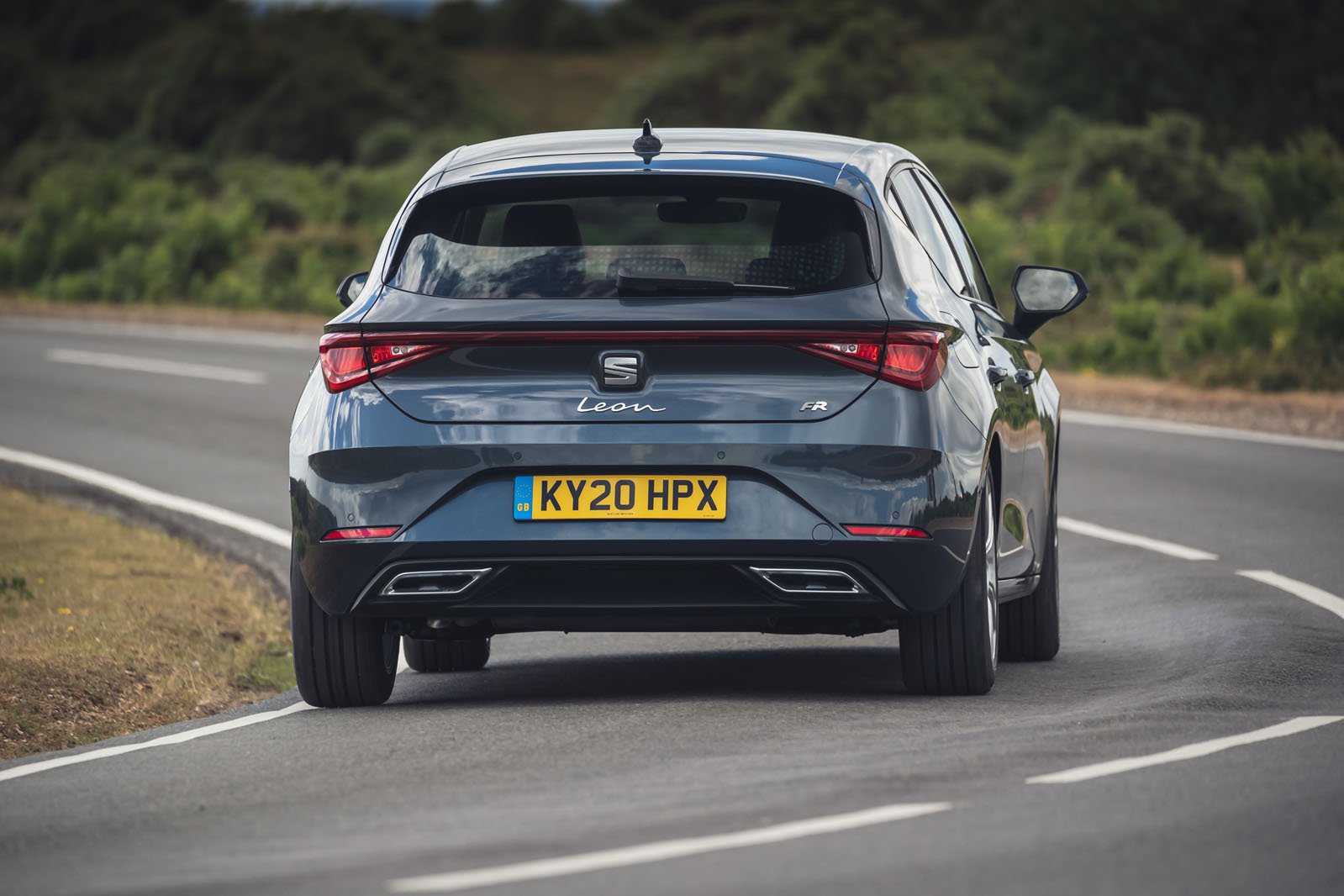 The sports suspension fitted to FR models really helps the Leon shine on twisty roads. The car turns in to bends keenly with little body lean and, thanks to there being lots of grip, you can carry a surprising amount of speed through corners. And while it isn’t quite as playful as that of the Ford Focus ST-Line, its steering is more naturally weighted, which helps to give you the confidence to drive quickly (when it’s appropriate to do so, of course). The steering weight can be adjusted via the touchscreen; you can make it lighter so that less effort is required when you’re parking or winding your way up a multi-storey car park.

SE and SE Dynamic models roll a little more and don’t have as much grip as the FRs, although they still hang on tenaciously enough, steer just as well and handle very tidily indeed. Despite having sports suspension as standard, at around 250kg heavier than the rest of the range (blame the big battery for that), the e-Hybrid is the least sporty model in the line-up. It exhibits the most lean in corners and its front end is quicker to wash wide when pushing on, but that’s also true of the slightly wallowy Mercedes A250e and softly sprung Octavia iV.

Cruise along a motorway and you’ll hear a bit more road and wind noise than you would in a Focus or Golf, but not enough to make the Leon a wearing long-distance companion. Indeed, its light but positive clutch pedal and sweet manual gearshift make it a pleasure to drive in more built-up areas.

The 1.5 TSI 130 engine isn’t the smoothest or quietest around, though; it transmits an annoying buzz to the soles of your feet and sounds rather coarse when worked hard. This is surprising because the more powerful 1.5 TSI 150 is much smoother and quieter. Even the three-cylinder 1.0 TSI 110 is more refined than the TSI 130

The plug-in e-Hybrid, meanwhile, is eerily silent when running on electric power alone, but don’t be surprised when the 1.4-litre the petrol engine fires up rather coarsely when you demand urgent acceleration or meet a steep hill. It’s the same unit as found in the Skoda Octavia iV, but the Skoda is a mite smoother when switching between power sources and does a far better job of isolating you from noise of the petrol engine.