There’s plenty of reach and rake adjustment for the steering wheel and a good range of movement for the seat, including adjustable lumbar support, so finding an ideal driving position is easy. SE L First Edition trim even comes with a powered driver’s seat with memory function, but the seats are very supportive on longer journeys, whatever version you go for.

Another feature that's standard (on all bar SE trim) is a digital instrument display called the Virtual Cockpit, which is easy to read with plenty of layout and content options. It's so good, in fact, that it makes the optional head-up display an unnecessary expense.

Unfortunately, the air-con controls are located within the central touchscreen. True, the temperature icons are always on display at the bottom, but the other climate functions are hidden away within the menus. It would be much simpler and less distracting to have physical controls, which you get in the Ford Focus Estate.

The Octavia Estate’s large side windows and relatively thin pillars front and rear give you great all-round visibility. It makes this relatively big estate car one of the easiest to manoeuvre in tighter spots.

To help relieve any residual parking worries, entry-level SE trim comes with rear parking sensors, with SE Technology and SE L getting front parking sensors as well. A rear-view camera is on the options list, as is a system called Park Assist that will steer the car into a parking space for you.

At night the default bright LED headlights help you pick your way. They can be upgraded at a cost to clever adaptive 'Matrix' LED headlights that allow you to use the main beam more often without blinding other drivers. 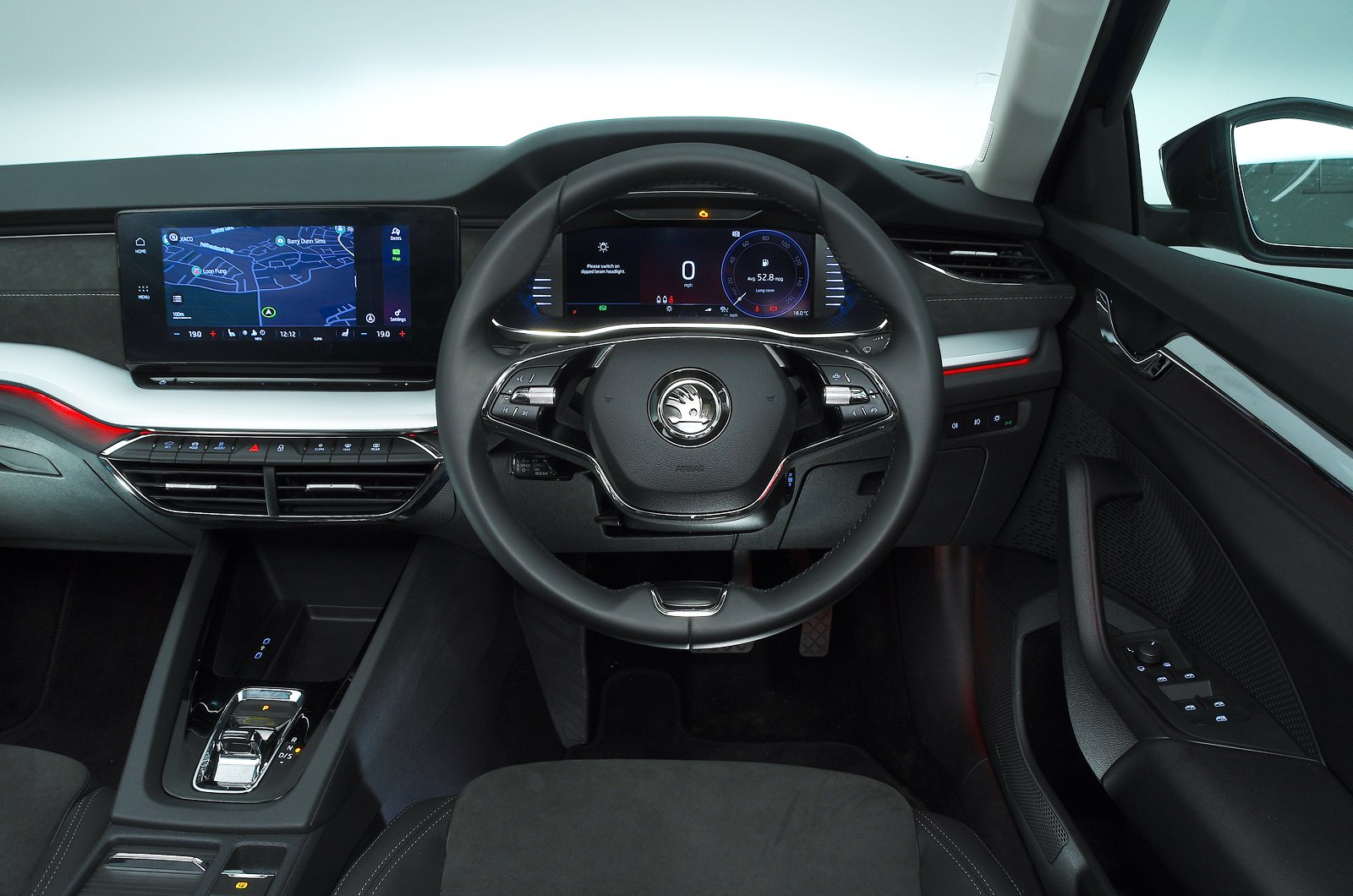 Helpfully, Skoda has positioned the infotainment touchscreen high on the dashboard so you don’t have to take your eyes far from the road to see it. SE First Edition trim has an 8.3in screen with Bluetooth, Apple CarPlay and Android Auto smartphone mirroring, as well as a DAB radio. Every other trim (including the entry-level SE oddly) has the bigger trim 10.0in screen, with built-in 3D navigation added to SE Technology and SE L versions.

The large icons are relatively easy to hit, the graphics look sharp and sophisticated, and the screen is far more responsive than the one in the Toyota Corolla Touring Sports. The Corolla does have helpful physical shortcut buttons that are handy to find by feel, rather than the Octavia’s touch-sensitive home and menu icons that you have to divert your gaze to find. Also, the software is prone to crashing occasionally and the menus for some of the features are befuddling, although the set-up isn't as bad as the latest Volkswagen Golf Estate's.

SE Technology trim gives you two USB-C ports, while top trims have up to five: two in a handy cubby in front of the gearlever, another two for rear-seat passengers and another up by the rear-view mirror. If you’re wondering why on earth you’d want one there, it’s to power a dashcam. Wireless charging and an upgraded stereo (as standard you get eight speakers) are options.

The range of plush, squidgy plastics on the top and the front of the dashboard, and above the armrests on the doors, make the Octavia feel nicer inside than the more expensive Volkswagen Golf Estate. SE L trim gets a faux suede wrapping to part of its dashboard that helps to lift the ambience further, and while there are some harder plastics lower down, these are still pleasingly textured. It all feels solidly screwed together, too.