If you're a company car driver or do a bit of towing, there are a couple of diesels, starting with the 114bhp 2.0 TDI 116, which offers decent performance, but the 148bhp 2.0 TDI 150 is the really impressive performer. Not only can it get the Octavia Estate from 0-62mph in a very respectable 8.8sec but, more importantly, it also pulls like a train from low revs. It certainly feels punchier than the 2.0-litre hybrid Toyota Corolla Touring Sports, which has more power.

Still, as good as the diesel is, our pick of the range is the excellent 148bhp 1.5 TSI 150 petrol. You need to rev it harder at times but when you do it's even brisker (0-62mph takes just 8.5sec) and it costs a whole lot less. Even the 108bhp 1.0 TSI 110 and mild hybrid 1.0 TSI e-Tec 110 feel peppy enough for extended motorway driving, but could feel a little strained carrying heavy loads regularly.

We'd also point you strongly towards the brilliant plug-in hybrid 1.4 TSI iV 204. You can read about its great costs advantages in a later section but, as far as performance goes, it'll rattle off 0-62mph in just 7.8sec, and although it's less rapid in electric-only mode it's pokey enough and can officially do up to 41 miles on a single charge. That's very competitive for a plug-in hybrid and should cover the majority of commutes. If you want even more performance, take a look at our separate Skoda Octavia vRS review.

The Octavia Estate’s ride is, on the whole, excellent. It’s noticeably softer than a lot of its rivals, including the Ford Focus Estate, and its wafty bent also makes it particularly adept for relaxed jaunts on motorways and A-roads. It’s also fine around town when you encounter rounded-off lumps in the road, such as sleeping policemen.

So why doesn’t it get five stars, then? Well, while it’s great 90% of the time, it can get surprisingly thumpy over sharper potholes and then, just occasionally, the bounciness over a series of bigger undulations encountered at speed can be slightly alarming.

Adaptive dampers (DCC) are an option and these can be stiffened to dial out that excessive float, but taking the additional cost into consideration we’d stick with the standard set-up. The main thing is to avoid massive alloy wheels, which won’t do the ride any favours at all. 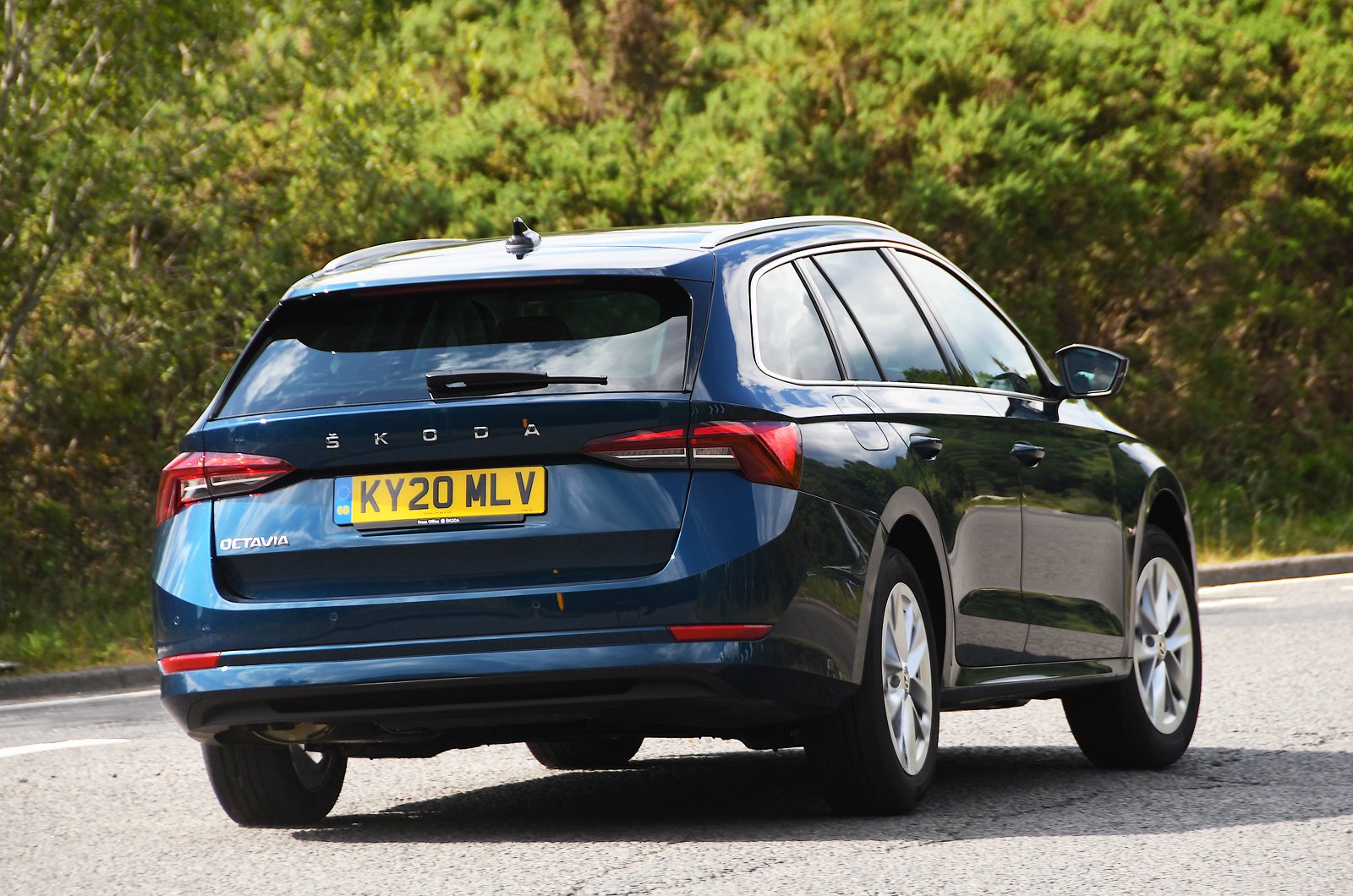 Despite the softness of its suspension, the Octavia Estate is perfectly capable when it comes to corners. In particular, its steering is precise and has plenty of reassuring weight, providing you with a good sense of connection to the road through the front tyres.

The Octavia also grips quite resolutely through bends and its never anything less than stable and secure if you're driving normally. That said, for enthusiastic drivers, the Ford Focus Estate and the Toyota Corolla Touring Sports lean less and feel considerably more agile.

The plug-in hybrid Octavia iV has a bulky battery pack on board but, because the Ocatvia's handling isn't a key strength in the first place, the fact the iV feels a bit heavier isn't the end of the world.

All the petrol engines are pretty smooth and quiet. The 1.5 TSI 150 and the 1.4 TSI iV plug-in hybrid are the best – of course, the iV is super quiet in electric mode – but even the three-cylinder 1.0 TSI 110 isn’t overly thrummy compared with the three-cylinder engines in the competition. The diesels are noisier and generate more vibrations, but even they aren’t intrusive.

Road noise is a mild bugbear and isn’t as well isolated as it is in the Ford Focus Estate, but wind noise is pretty muted at 70mph. The Octavia is prone to suspension noise – you can hear it working away over broken really surfaces.

The manual gearbox is light and the auto ‘box changes smoothly but is more abrupt at parking speeds. Lift off the accelerator pedal and automatic Octavias can ‘coast’ out of gear to save fuel, before re-engaging drive smoothly when you put your foot down again. The stop-start system (on versions that aren’t mild or full hybrids) can frustrate in traffic, cutting the engine a bit too soon and taking too long to fire it back up again.