The estate class include behemoths like the Volvo V90, but even to there’s plenty of space up front in the Octavia; a very tall driver will certainly be able to get comfortable even with a headroom-robbing panoramic glass roof fitted. Storage is better than in many rivals, too; the door pockets are a good size, with provision for a 1.5-litre bottle, and the air-con-cooled glovebox is big enough to keep your entire £3.50 meal deal fresh. We speak from experience.

There’s another large covered storage space beneath the front armrest that is perfect for hiding electronic devices and other valuables, and it's also cooled, should you need to keep yet more food stashed and fresh.

Behind the gearlever are two fixed cupholders, which will keep your coffee-to-go secure and, ingeniously, has been designed to grip a drinks bottle so tightly that you can twist its cap off with one hand while driving. In front of the gear selector is a handy tray that’s big enough for a large mobile phone to sit next to your house keys and wallet or purse.

If you're the middle-seat passenger, you have to place your feet either side of the Octavia's raised central tunnel, but if you're one of the two outer passengers, there's loads of foot room under the front seats. The Octavia also has a good amount of head and leg room for a car of its size, with space for a six-footer even when the front seats are slid back. Just bear in mind that the Ford Focus Estate shades it for leg room, while the Toyota Corolla Touring Sports has a much smaller central hump and a bit more head and leg room.

Of course, then there are even bigger estate cars, too, including the massive Skoda Superb that is truly lounge-like.

A central armrest with two cupholders is standard on all models and the rear door pockets are a decent size. A map pocket on the back of each front seat, along with a smaller smartphone pocket, is also standard, along with sizeable rear door bins. 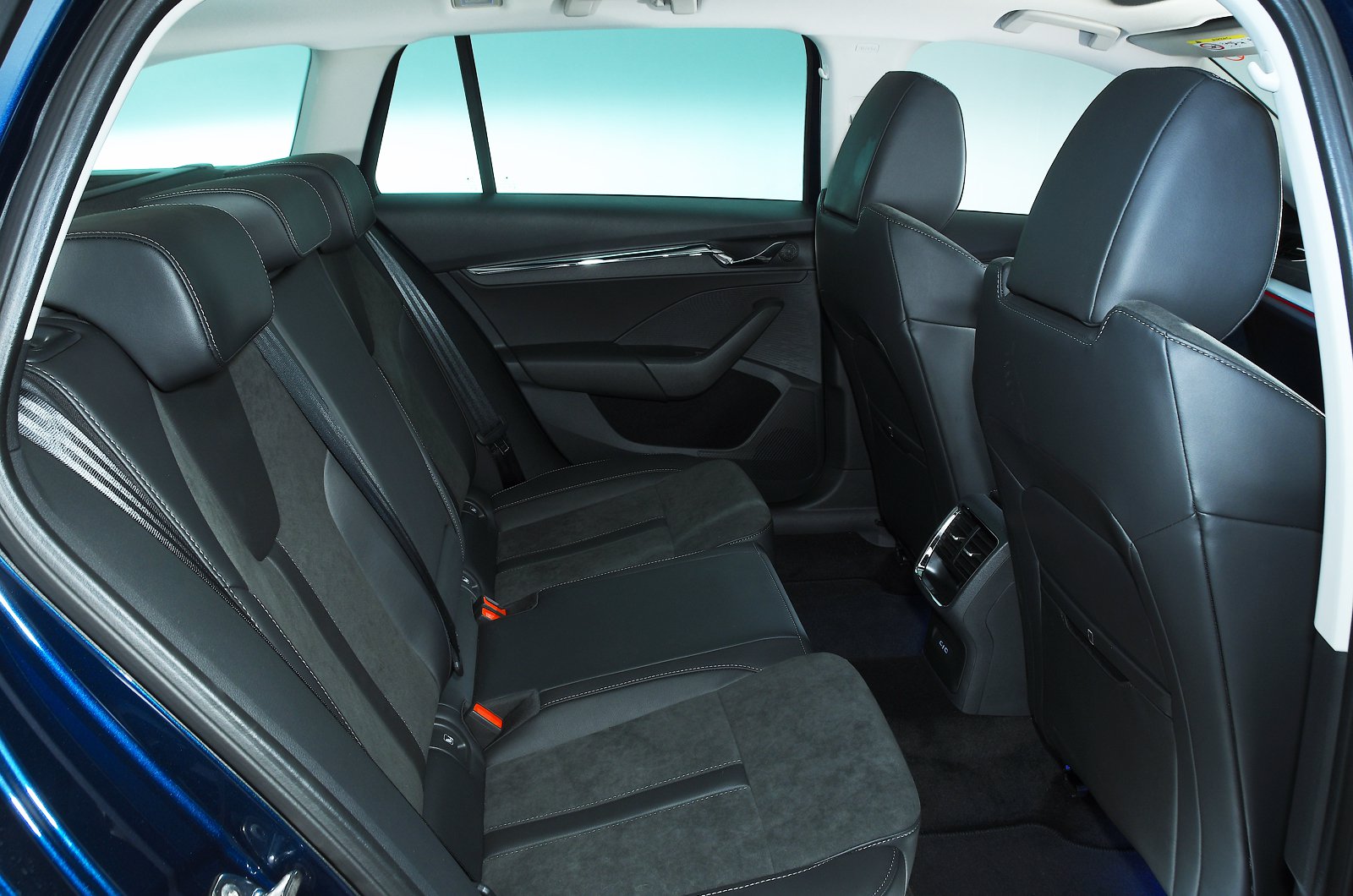 In terms of its flexibility, the Octavia Estate is pretty conventional, although the 60/40 split seats are folded by a couple of levers in the boot, so you don’t have to walk around to the passenger compartment.

The front passenger's seat has plenty of adjustment, including for height and lumbar support. You can't get a powered option, though, and it doesn't fold flat to increase the storage space.

The Octavia’s boot is not only huge compared with similarly sized rivals, but it’s also not far off the size of the Mercedes E-Class Estate's. We managed to fit nine carry-on suitcases under the parcel shelf, just two shy of the larger Skoda Superb Estate's total. The load area is also longer and taller than most of the comparably priced estates, and it’s a practical, squared-off shape.

Fold down the back seats and the space is truly vast, although the seats don’t lie completely flat, leaving an awkward step in the extended load area. That is unless you opt for the variable-height boot floor. It's standard on SE L trim, and a cheap option on the other trims; it's definitely worth having. An electric tailgate is also on the options list. What is standard includes a 12v socket, bag hooks and a couple of compartments at the side to stop your boot clutter sliding around.

With its big battery pack and other plug-in hybrid-related hardware to carry around, the iV’s boot shrinks a little bit. The floor sits higher than it does in the petrol and diesel variants, but compared with most other plug-in hybrids it's still massive. It’s certainly bigger than the similarly priced Kia Ceed Sportswagon PHEV and it still has some under-floor storage for the charging cables to be stowed away neatly.