You get a choice of two petrol-electric hybrids for the Toyota C-HR – a 120bhp 1.8-litre that's also found in the Toyota Prius, and a more potent 181bhp 2.0-litre shared with the Toyota Corolla. In 1.8-litre form, it's fair to say it's no speed demon, managing 0-62mph in 11 seconds and therefore taking a while to get up to motorway speeds. Then again, so do some of its smaller-engined rivals, notably the 1.0 TSI versions of the Seat Ateca and Skoda Karoq.

If that all seems a little pedestrian, check out the 2.0-litre instead. It has considerably more power and cuts the acceleration time down to 8.2sec. That's a little bit faster than versions of the Ateca and Karoq fitted with a 148bhp 1.5 TSI engine. Whichever engine you go for, the C-HR puts its combined petrol and electric power output to the front wheels through a CVT automatic gearbox.

Ride comfort varies depending on which trim you go for. Entry-level Icon models have 17in wheels while Design and Excel use larger 18in alloys. With both wheel sizes, the C-HR rides well; it's not soft and wallowy like some SUVs, so there’s no nausea-inducing body bounce along undulating roads. That said, if you're looking for something a bit more wafty, try the Peugeot 3008.

The trouble comes when you go for the GR Sport model, because as well as having 19in alloys, it's fitted with firmer suspension to improve handling. The suspension does help with the handling, but that comes at the expense of a fidgety ride no matter what speed you’re doing, as well as more abrupt shocks when it goes over drain covers or potholes. 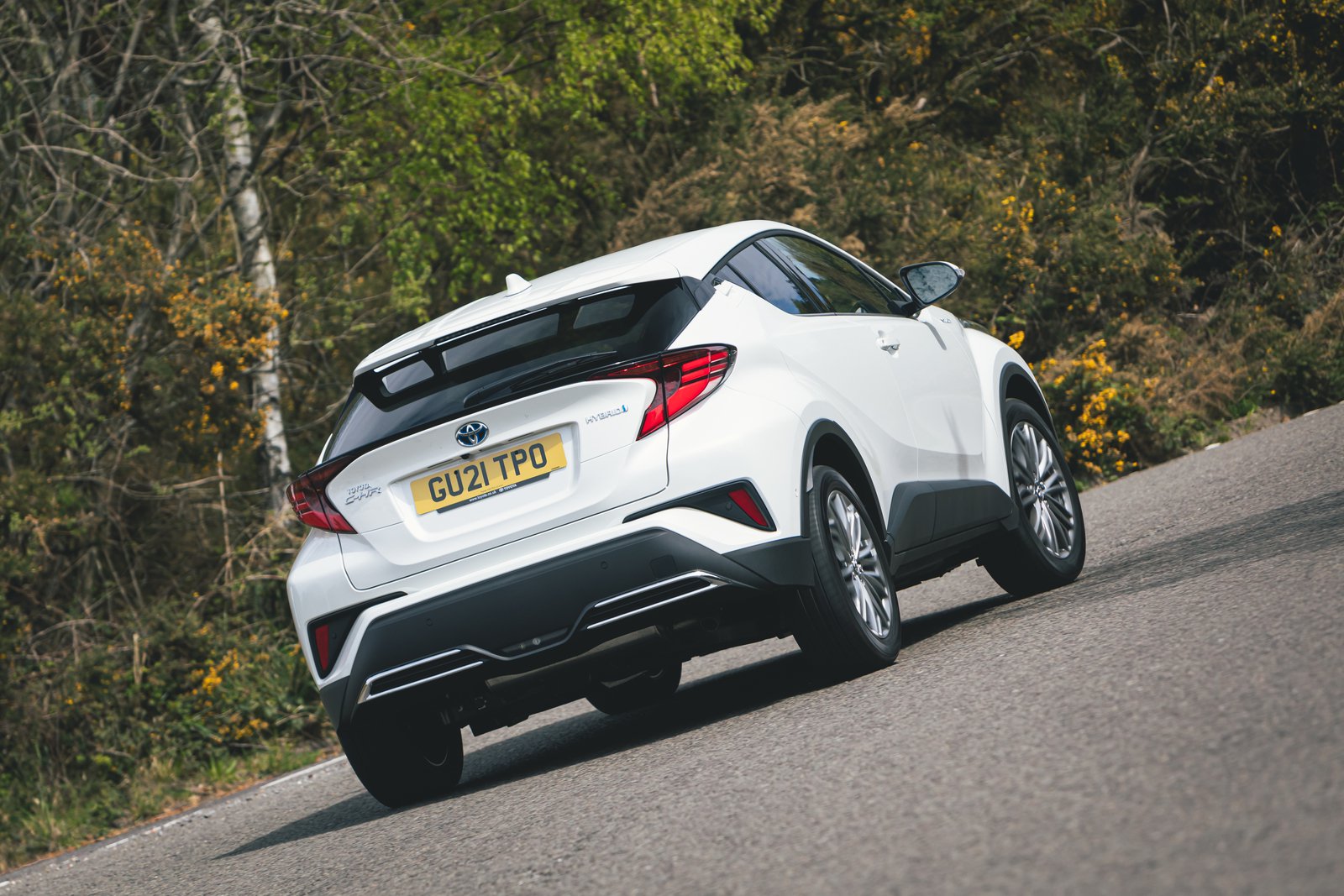 Although the now hybrid-only range is hampered slightly by the extra mass of its batteries, the C-HR is still remarkably agile by family SUV standards, staying upright and hanging on gamely through tight twists and turns. Even its steering is accurate, with a level of precision that gives you confidence through faster bends while remaining light during low-speed manoeuvres.

Taking things one stage further is the GR Sport, which has tweaked suspension and stickier tyres that provide it with a little more grip than the regular C-HR, plus more responsive steering. That said, the Seat Ateca has more naturally weighted steering and is more engaging to drive quickly – even if it does lean a bit more than the C-HR would in a particularly tight bend.

At very low speeds, the C-HR can be driven using the electric motor alone so it’s much quieter than a conventional petrol or diesel alternative. The trouble is, even relatively gentle acceleration requires the help of the petrol engine (particularly in the less powerful 1.8), at which point things get a bit rowdy.

The blame lies with the CVT automatic gearbox, which, whenever you squeeze your right foot, causes the revs to rise suddenly and stay high until you’re up to your desired speed, filling the interior with an annoying drone in the process.

There is more wind and road noise at motorway speeds than in rival cars, including the Mazda CX-30 and Seat Ateca, and road noise is particularly noticeable in the GR Sport because of its bigger tyres.