With so many different engines to choose from, it would be easy to feel bewildered when speccing your XC40. But there’s no need because, at least on the petrol and diesel side of things, there are only two engines you really need to consider.

The first is the 1.5-litre T3 petrol. This has a respectable 161bhp and, particularly when combined with the optional automatic gearbox, delivers adequate performance for most family SUV buyers’ desires. The B4 and B5 are usefully quicker but much more expensive to run (as we’ll come onto explain later).

Or if you’re in the market for a diesel, go for the D3 with front-wheel drive (four-wheel drive pushes up the price and blunts performance). On paper, it’s slightly slower than the T3 petrol, but it pulls harder at low revs so actually doesn’t need working as hard when you want to make swiftish progress.

The plug-in hybrid T5 Recharge is also worth considering for its low CO2 emissions and its ability to drive on pure battery power for around 25 miles. It’s pretty quick when you put your foot down, too, with 0-60mph taking just 7.0sec.

The XC40 is more comfortable than all of its chief rivals, including the firm-riding BMW X1 and the unsettled Jaguar E-Pace. It also betters relatively comfortable alternatives, such as the Range Rover Evoque and Volkswagen Tiguan.

What’s so good about it? Well, on faster roads, all versions of the XC40 breeze over ripples and expansion joints and also manage to take the sting out of razor-edged potholes around town — even on the whopping 20in alloy wheels that come as standard with the more expensive trim levels.

Curiously, the XC40 rides most adeptly on 'sports' suspension, which is fitted as standard to R-Design versions. The softer 'dynamic' suspension on other trim levels is still comfy, but isn't as well controlled over speed humps and crests. There's a bit of side-to-side sway along uneven roads with either suspension setup, but this is the case with the vast majority of tall SUVs. The optional adaptive suspension, which stiffens or softens depending on which mode you're in, is an unnecessary expense.

While the XC40’s body will lean a fair bit through corners and its steering isn’t particularly feelsome, drive it in a relaxed manner — as most people will — and it handles perfectly adequately. It's certainly on a par with the Range Rover Evoque.

R-Design models are slightly more composed than the other versions, thanks to that Sports suspension we mentioned above, although the difference isn't huge. It’s worth pointing out that the extra weight of the plug-in hybrid Recharge model's batteries makes it the least agile XC40, but since none is a riot on a country road, you don't feel like you’re missing out.

In short, the XC40 is easy to drive but not much fun. If that's a deal-breaker for you, consider the BMW X2 or Seat Ateca.

Our favourite T3 petrol engine is relatively hushed at low revs, apart from a few whooshes and whistles from the turbocharger. It starts to sound quite thrummy when you rev it harder, but you don't feel much vibration through the controls. The more powerful B4 and B5 engines are even smoother and quieter.

Meanwhile, the D3 and D4 diesels are a bit grumbly at tickover but, once the revs rise past 1500rpm, become smoother than equivalent engines in the BMW X1 and Volkswagen Tiguan. The Range Rover Evoque D180 has a quieter engine, though.

There’s only some mild wind buffeting around the windscreen at motorway speeds. Sadly, there is quite a lot of road noise, particularly with big 20in alloys fitted; the Evoque is notably more subdued in this respect. Still, the XC40 is nowhere near as raucous as the X1 along a typical stretch of motorway. 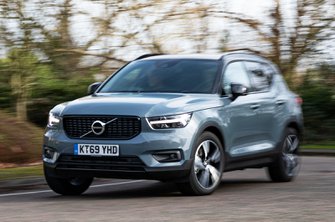 Stylish, practical and good to drive

One of the best small SUVs; great to drive and classy inside