Getting in and out of the Duster is a breeze, thanks to its tall, wide front doors, and there’s a decent amount of head room up front once you’re in. However, the front seats don't slide very far back at all, so you'll struggle for comfort if you're really long in the leg.

While the Duster is pretty good for passengers, it’s not so great for storing their stuff. Take the front cupholder, for example: It’s simply too shallow to put anything spillable in there, and you’ll only squeeze a half-litre bottle into each door pocket. The MG ZS trounces the Duster here, with deeper cupholders and larger doorbins.

As with those at the front, the Duster’s rear door openings are tall, so access is easy, and the height of the seats from the ground means you don’t have to bend down too much to help kids get in and out of their child seats. You’ll just about squeeze three adult passengers across, but whoever ends up in the middle seat will have to sit splay-legged to accommodate the wide central floor hump.

Overall, the Duster offers quite a lot of space in the rear and certainly feels like it'll fit into family life for most households. However, at this bargain end of the family SUV price spectrum, the MG ZS is even more accommodating. Entry-level Dusters have an all-or-nothing one-piece folding rear bench, but Essential models and up have a rather more versatile 60/40 split-folding arrangement. Folding the rear seatbacks is easy enough and leaves a very long load area, and if you flip the rear squabs up first, it becomes usefully flat, too.

The front passenger seat doesn’t adjust for height, but you can fold its backrest forward by about 45deg to allow more space for extra-long loads when the rear seats are folded. The outer rear seats have Isofix fittings and it’s possible to fit three child seats across, depending on their size.

The Duster’s boot is large by any standards; four-wheel-drive Dusters have slightly less space than front-wheel-drive models, but both can fit seven carry-on suitcases. That’s more than you’ll get into a Suzuki Vitara, which can take five, or the Nissan Qashqai, which takes six, but the same as the Seat Ateca, even though the Ateca’s boot is actually considerably smaller. Regardless, there’s easily enough space in the boot to carry a week’s holiday luggage, a fold-up buggy or the spoils of an especially extensive family grocery shopping session.

With the rear seats folded as flat as they’ll go, front-wheel-drive cars offer 1623 litres of volume – plenty for a visit to that well-known Swedish store for some flat-pack furniture. The boot itself is also a very practical shape: wide and high, with only a small lip to load items over. 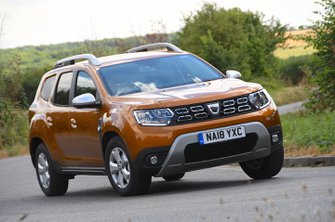