Top-spec GT-Line S models get a 10-way electrically adjustable driver’s seat with two memory settings, but the seat doesn’t go as low as the manually adjustable version and, overall, the it isn't quite as supportive as the best in the class.

As more and more features are crammed in to the touchscreens of modern cars, it’s refreshing to see that the Ceed gets big, clearly marked buttons that are easy to reach, along with good old-fashioned knobs for the air-conditioning system.

Forward visibility is pretty good, with relatively thin windscreen pillars making it easy to see out of junctions. The view through the back is less impressive, especially over the shoulder. That's down to the small rear screen and thick pillars behind the rear doors blocking your view. It's much the same in many of the Ceed's rivals, though, and at least all variants get a reversing camera as standard to make life that bit easier.

All versions have heated door mirrors, a front wiper de-icer and automatic lights as standard. If you upgrade to 3 trim, you'll get automatic wipers and rear parking sensors thrown in, while GT-Line S trim adds front parking sensors and LED headlights (the standard headlights are pretty dim by modern lighting standards). 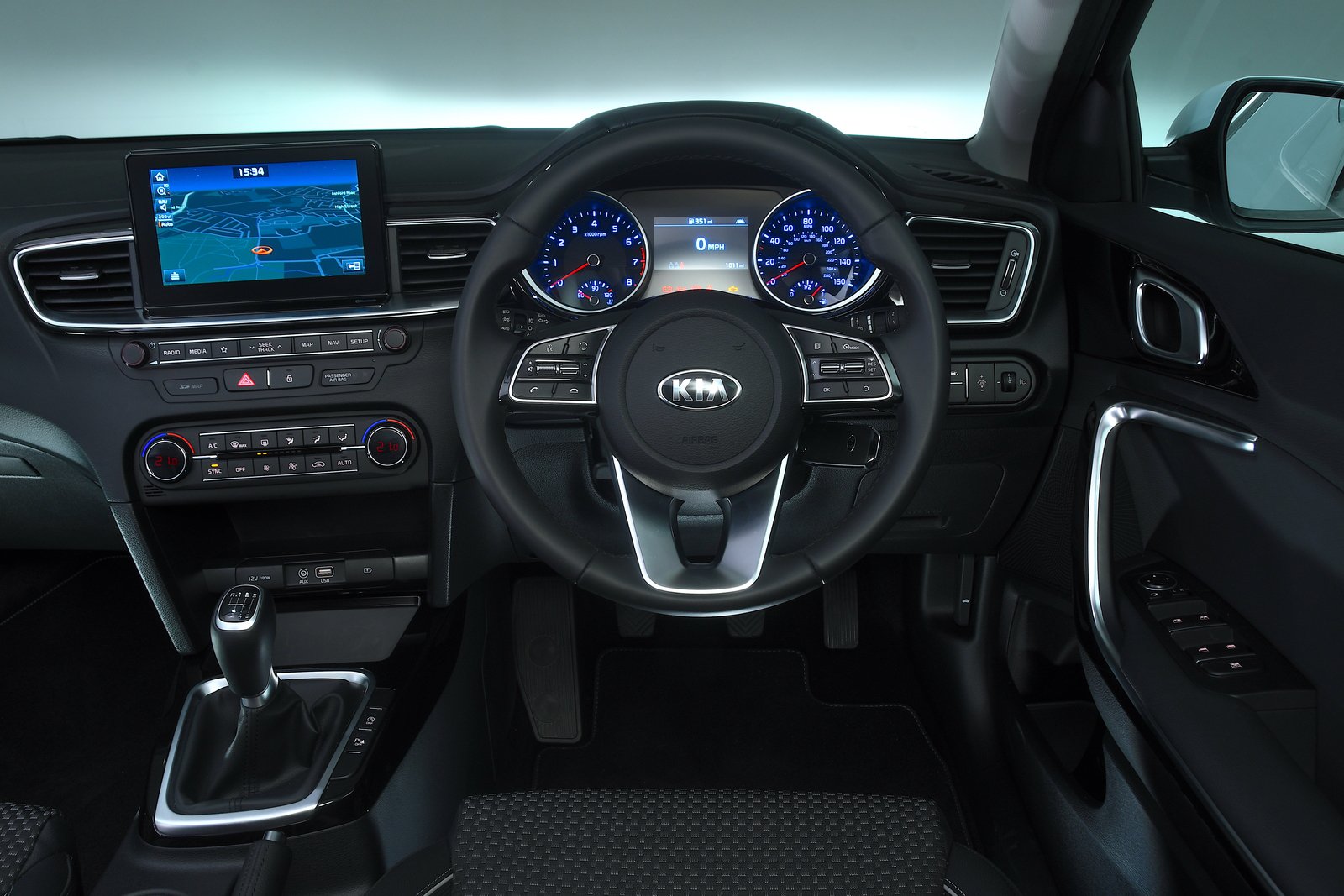 In entry-level 2 trim, the Kia Ceed comes with a 8.0in touchscreen infotainment system that features DAB radio, Bluetooth and Apple CarPlay/Android Auto smartphone mirroring. If you don’t want to use your phone's navigation app, you can choose 2 Nav trim to get in-built sat-nav as well as the larger 10.25in touchscreen which all models above the 2 get.

While some people might not like the screen's floating look, which makes it look like a tablet computer that's been glued to the top of the dash, it does save you from having to look down to use it. The system is responsive in both screen sizes, with menus that are reasonably logically laid out. It's not perfect, though – for example, there isn't a physical shortcut button to take you straight to the phone menu, and some icons are too small to hit easily on the move. It's still a marked improvement over the infotainment in the VW Golf, but the Seat Leon and Skoda Octavia have higher-definition screens with clearer graphics.

You can't simply add options to the Ceed – you have to upgrade to a higher trim level to get what you want, which is a shame. For example, to have wireless phone-charging or the punchy eight-speaker JBL stereo (the standard stereo has six speakers), you have to pay much more for top-spec GT-Line S.

Entry-level 2 models miss out on the piano-black trim that’s standard higher up the range and adds visual appeal to the Ceed’s interior, which otherwise looks a little dull compared with rivals such as the Mazda 3. It’s well screwed together, though, and offers plenty of tactile squishy plastic, along with well-damped controls.

It's not as classy inside as the more expensive Audi A3 or BMW 1 Series, as you might expect of a cheaper car, but it feels rather more upmarket than the Ford Focus and Vauxhall Astra.