The Kia e-Niro is a bigger car than models such as the Renault Zoe and offers plenty of leg and head room for six-footers. Its surprisingly broad interior means you won’t want for shoulder room, either; there's more distance between you and your passenger than in the Hyundai Kona Electric or Peugeot e-2008.

Elsewhere, there’s a generous-sized glovebox, two cupholders between the front seats (these can be folded away to make a large lidded cubby), a couple of shelves for your phone and keys in front of the gear selector, and door bins large enough to take a 500ml bottle of water.

The e-Niro offers significantly more rear head and leg room than you’ll find in most rivals, including hatchbacks such as the Zoe but also SUVs like the DS 3 Crossback E-Tense, Kona Electric, and Peugeot e-2008. If you're over six-feet tall won’t feel hemmed in, even with a similar-sized driver sat in front, and there's enough room for three adults sat abreast.

The only cars that are on the same page for rear space are the MG ZS EV, the Kia Soul EV and the Volkswagen ID.3. 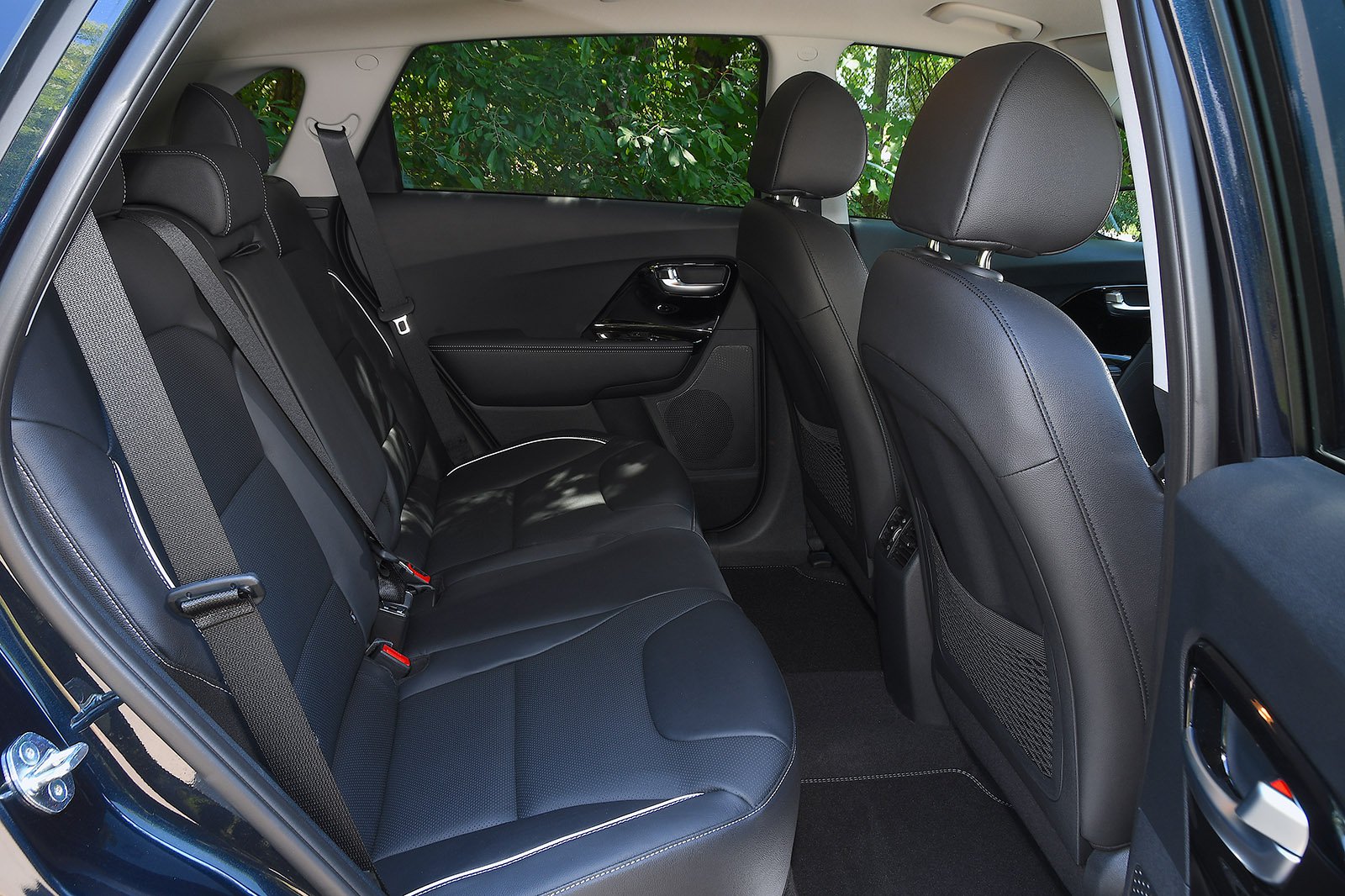 The e-Niro’s rear seats split and fold in the traditional 60/40 ratio, rather than the more convenient 40/20/40 arrangement. The same is true in most rivals, including the Kona Electric and Soul EV. Unlike other SUVs of a similar size, the rear seats don’t offer any clever tricks, either, such as sliding back and forth or reclining.

The front passenger gets height adjustment on all trims.

Despite the extra batteries under the floor, the e-Niro's boot is actually bigger than the hybrid Niro. In fact, its boot space is similar to some mainstream family SUVs, such as the Nissan Qashqai.

For reference, we managed to fit five carry-on suitcases below its parcel shelf, which is the same number as a lot of rivals, including the MG ZS EV, Peugeot e-2008 and ID.3. If you need a bigger boot, the Nissan Leaf can swallow up to seven cases, but the Tesla Model 3 trumps that with up to ten.

The e-Niro's boot is also a usefully square shape, there’s virtually no load lip at the entrance, plus you get enough under-floor storage to house the charging cables. That sounds like an obvious feature, but the ID.3 doesn't have it so the charging cables get in the way.