Most folk should have no problem getting comfortable behind the wheel of the C Class. There’s plenty of adjustment to the driver’s seat (including electric adjustment for height and seatback angle, plus four-way lumbar adjustment on all models) and the steering wheel moves a long way in and out, as well as up and down.

That said, there’s a bulge down by the footwell that interferes with the position of your left leg and the space around the rest for your left foot is rather limited if you have big feet – problems that are less of an issue in rivals such as the Audi A4 Avant and BMW 3 Series Touring. For the best driving position, with none of these issues, look at a Volvo V60 instead.

The relatively few buttons on the dashboard are within easy reach, mind, and are simple to use, while everything else is controlled via a rotary controller and touchpad on the centre console –  we’ll discuss these further in the infotainment section. The standard analogue dials are clear, with a 12.3in digital instrument panel available as an option on non-AMG versions. This can show sat-nav maps, for example, just below your line of sight, but it comes as part of an expensive optional package.

The forward view from the C Class Estate is good, and while the car has a relatively high waistline and thick rear pillars, all-round visibility is acceptable.

A reversing camera is fitted to every model, while front and rear parking sensors and a self-parking system are standard from mid-level Sport versions upwards. Sport trim also adds bright LED headlights for better night vision, with excellent adaptive units available as an option. A 360degree camera comes as part of the Premium Plus trim upgrade.

Every C Class gets at least a 10.25in colour screen that is mounted high up on the dashboard for easy viewing and is operated by a rotary controller between the front seats. The system is mostly slick, reasonably responsive and relatively easy to use, but BMW’s iDrive system in the 3 Series and Audi's MMI in the A4 are quicker still and make navigating menus even easier. You can also opt for a digital instrument cluster to view sat-nav instructions, media information or general driving statistics, but it’s part of an expensive Premium Plus equipment package.

All trims come with sat-nav, while the optional Comand system adds further functionality to this, such as satellite mapping and car-to-car sharing of traffic situations, as well as a handwriting touchpad for entering names and addresses into the system.

A digital radio is standard on all models, as are two USB sockets in the centre console, while a Burmester sound system is an optional extra – but again, only in that pricey upgrade. 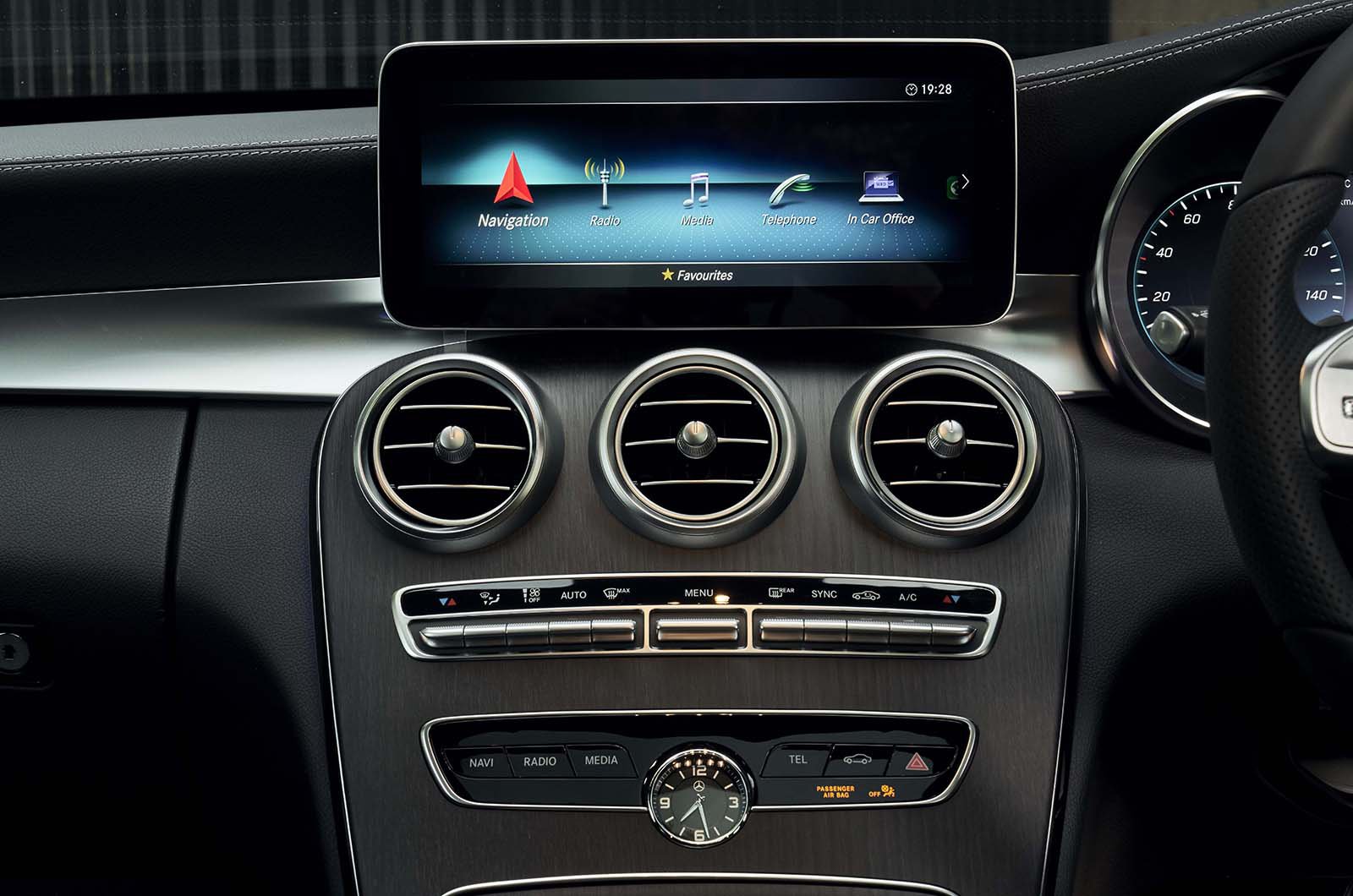 While the Volvo V60 offers a cleaner look for those that prefer minimalism, there’s little doubt that the C Class Estate looks the part inside, with plenty of styling cues from the bigger S Class to bolster the wow factor. Indeed, for many the C Class is rather more exciting than the more prosaic BMW 3 Series and Audi A4 designs.

But while the A4 may look less dramatic, it’s second to none in this class for solidity and material quality; the C Class’s classy looks doesn’t tally with how it actually feels. Start prodding some of those nice-looking materials, such as the centre stack or the silver air vent holders, and more often than not they squeak annoyingly or deflect. Look lower down the interior and the plastics become rather lower-rent, too.