We’d stick to the 245bhp, 2.0-litre four-cylinder diesel Mercedes GLE 300d. It pulls strongly from around 1500rpm and the standard nine-speed automatic gearbox kicks down promptly when you floor the accelerator pedal, with similar performance to the Audi Q7 45 TDI. The six-cylinder 350d and 400d offer more punch, with the latter delivering particularly strong acceleration smoothly and without fuss.

If you’re looking to go green or save money on company car tax, there’s the 350de plug-in hybrid. It has a less powerful (194bhp) version of the 300d’s 2.0-litre, four-cylinder diesel engine plus an electric motor. The hybrid is officially a little quicker than the 300d and feels quite muscular when pulling away. Its claimed electric-only range is up to 66 miles and low official CO2 emissions put it in a very low company car tax band.

Higher up the price list, the six-cylinder petrol GLE 450 and AMG-badged GLE 53 models accelerate strongly and the GLE 53 sounds delightfully tuneful – the sports exhaust pops and crackles when you let off the accelerator. Neither engine quite matches the effortless low down shove of the 400d diesel, though. At the top of the range is a V8 63, although we’re yet to try it. The GLE’s towing limit is 2700kg unless you select the towing pack, which boosts all but the 300d to 3500kg, matching key rivals.

Two suspension setups are available on the Mercedes GLE, but the decision is made for you depending on your engine choice. In short, the entry-level 300d comes with conventional steel springs, while plusher air suspension is fitted to the more potent engines.

We haven’t tried it with steel springs yet, but we’ve been impressed by the cars we’ve driven with air suspension (Airmatic in Mercedes speak). The GLE is more comfortable than a Land Rover Discovery on town roads and is really quite cosseting on a motorway. However, the slightly wallowy nature means you’ll notice your head swaying around on uneven country roads. We’d recommend standard 20in alloy wheels; cars with the bigger optional 22in alloys are much less comfortable.

The GLE 53 gets slightly stiffer air suspension. It doesn’t deal with potholes and expansion joints quite so deftly but is more comfortable on country roads thanks to its superior body control. Vertical movements are well controlled and there’s no float when you drive over a sudden crest. For the most comfortable ride in the luxury SUV class, we’d recommend the Audi Q7. 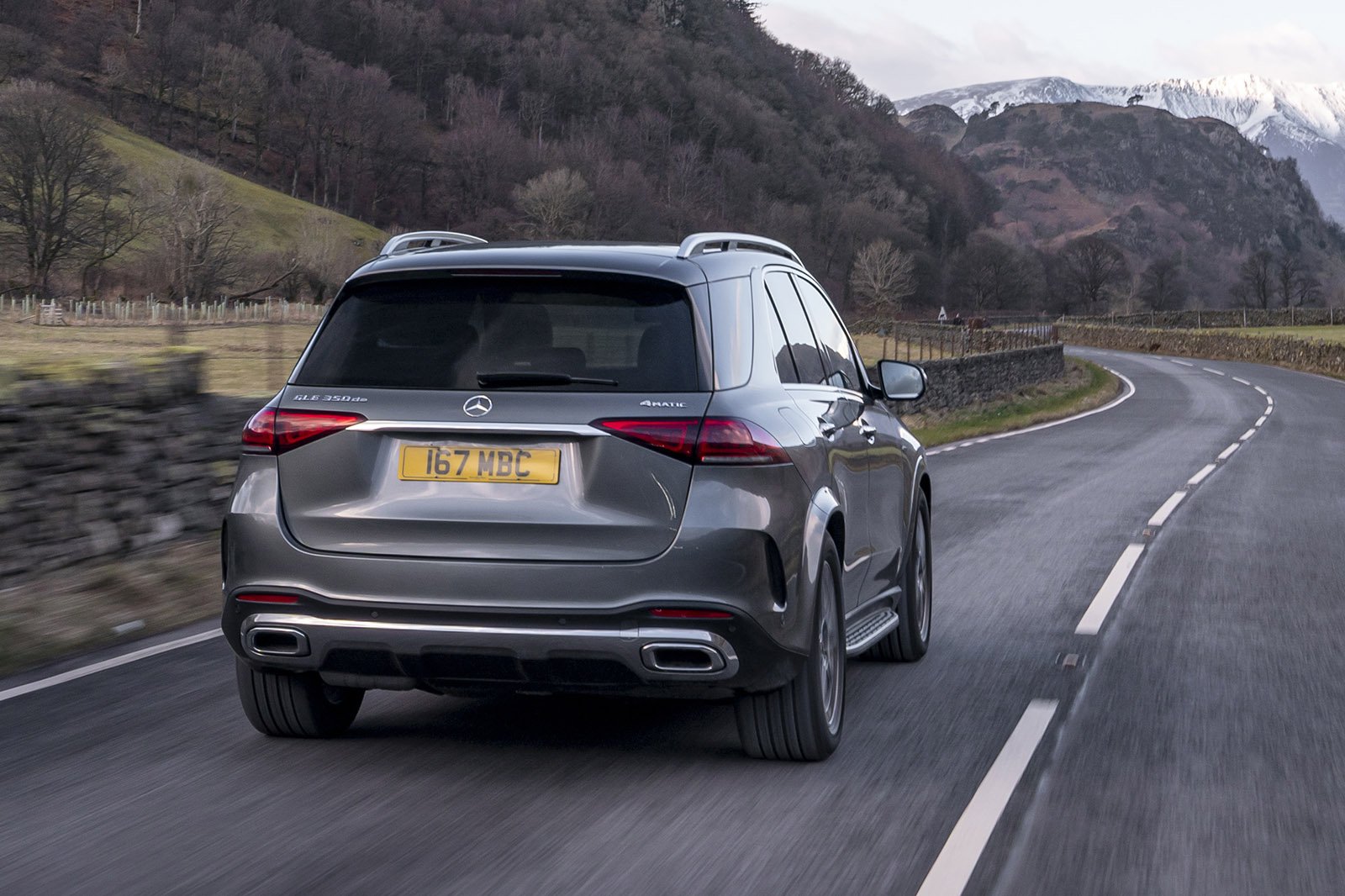 The Mercedes GLE’s steering is very light around town, making tight manoeuvres easy, but it feels a little vague at higher speeds, which makes it tricky to place the car's nose accurately on demanding country roads.

While it doesn't sway around as dramatically as the top-heavy Land Rover Discovery, it’s not as composed or confidence-inspiring through bends as the Audi Q7 or BMW X5.

That said, the AMG-fettled GLE 53 is much more agile, with greater grip and sharper steering. It feels stable, balanced and reassuring. The Porsche Cayenne handles even more sweetly, but the 53 isn’t far behind when it comes to pure entertainment.

There’s some wind noise at higher speeds in the Mercedes GLE interior, but generally it’s really peaceful – you'll never need to raise your voice to chat with passengers. Even the GLE 53, which has wider tyres, drums up hardly any road noise. In this class, only the Audi Q7 and more expensive BMW X7 are quieter.

The six-cylinder petrol engines in the GLE 450 and 53 are particularly hushed. The 300d diesel is noticeably noisier but still close to the Audi Q7 45 TDI for quietness. The six-cylinder 350d and 400d engines offer a more relaxing soundtrack than the four-cylinder 300d, providing a subtly muscular exhaust note under hard acceleration.

All GLEs have a nine-speed automatic gearbox as standard, and it’s more responsive and smoother than the equivalent gearbox in an Audi Q7. There’s no hesitation when pulling away and it’s pleasantly snappy in Sport Plus mode, especially if you use the gear-change paddles behind the steering wheel. The 350de blends diesel and electric power virtually seamlessly when accelerating, but because of the regenerative braking system (which recovers energy to top up the battery), the brakes can take a bit of getting used to.