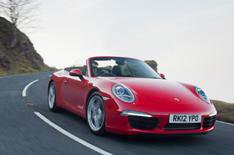 The Porsche 911 Cabriolet is the drop-top version of the new 911, which weve now driven in the UK.

Whats the 2012 Porsche 911 Cabriolet like to drive?
We drove both versions of the car, with the Carrera S first. This can hit 60mph in just 4.7 seconds and go on to a top speed of 187mph, but the real beauty of the engine is the way it pulls strongly from as little as 2500rpm. This means you dont have to constantly change up and down the new seven-speed manual gearbox to keep up a decent pace.

Seven speeds? Yes, seven, but dont worry: you end up using the box as a six-speeder, and only really hooking seventh when youre at cruising speed on the motorway. The box doesnt have quite the mechanical feel of the previous-generation cars six-speeder, but its still a quick, fulfilling way to swap ratios.

Nonetheless, the Cabrio feels fractionally more relaxed than its coupe sibling, so the optional PDK double-clutch semi-auto gearbox is probably the way to go (most 911 drop-top buyers will spend the extra 2387 on the PDK). It shuffles up and down through the ratios unobtrusively when you leave it to its own devices, and it makes whipcrack changes when you decide to take charge.

The entry-model Carrera might have 400cc and 49bhp less, but it is still a properly brisk machine. The dash to 60mph is over in 5.0 seconds and the car wont stop accelerating until 178mph, numbers that arent significantly behind those of the more expensive version. The smaller engine also generates a bit less torque, but it makes up for this by feeling ever so slightly quicker to rev.

Its a sweet thing, no doubt, and is probably the fractionally more enjoyable of the pair, if only because you can use slightly more of its performance more of the time. Both cars are mightily quick.

Roof up or down (the transformation takes just 13 seconds at up to 30mph), the 911 Cabriolet is a stiff-bodied machine, exhibiting none of the wobbly sensations that afflict many convertibles. This means that the suspension is able to simply get on with the job of dealing with the road surface, which is a job it does superbly. The 911 Cabrio grips oh-so-tenaciously and changes direction like a leaf on the breeze.

The new electric power steering system gives you a reasonable idea of what the front wheels are up to, allowing you to really lean on the front tyres as required. However, weve also driven this system in the coupe model and know that it isnt quite as convincing when the roads are damp. Overall, it isnt quite as brilliant an installation as it is in the 2012 Porsche Boxster.

The new Porsche 911 Cabriolet comes on 19-inch wheels as standard, with 20-inchers available as options. Wed strongly recommend going for the smaller wheels because the car steers most sweetly and rides much better with these in place.

Whats the 2012 Porsche 911 Cabriolet like inside?
Ahead lies the traditional Porsche instrument cluster with the rev-counter in prime position, while to your right sits a raised centre console that places the gearlever right where you need it just the width of a hand from the wheel.

The console contains the buttons that control the climate control and myriad other features depending on how you specify your car. Theres also a new sat-nav system that has Bluetooth connectivity. The sheer number of similarly sized and marked buttons can make it tricky to find what you need at a glance, although doubtless this would ease the more you get to know the car.

Refinement is good with the hood raised. Theres a fraction more road noise than in the coupe at speed, but otherwise the only noises are the ones you want to hear. Wind noise, especially, is conspicuously muted. Drop the roof and there is a slight bluster in the cabin above, say 50mph, but all you need do is raise the standard electric wind deflector and all is instantly becalmed.

Should I buy one?
We cant think of a reason why not. The 911 Cabriolet is a purposeful, but agreeable way to travel. Itll cover long distances with ease, its wicked side comes out when you want to get down and go for it, and itll make you look good when youre in the mood for a low-speed pose.

Its also more efficient than ever, especially with the PDK gearbox in situ. The Carrera Cabriolet PDK emits 198g/km of CO2, putting the car in the 30% band for company car tax. Itll also do an average of 33.6mpg. The Carrera S Cabriolet has figures of 210g/km/33% and an average of 31.7mpg. Whats not to like?