With a new, more powerful turbocharged engine, is the 911 Carrera 4 Targa more of a driver's car than the outgoing model?... 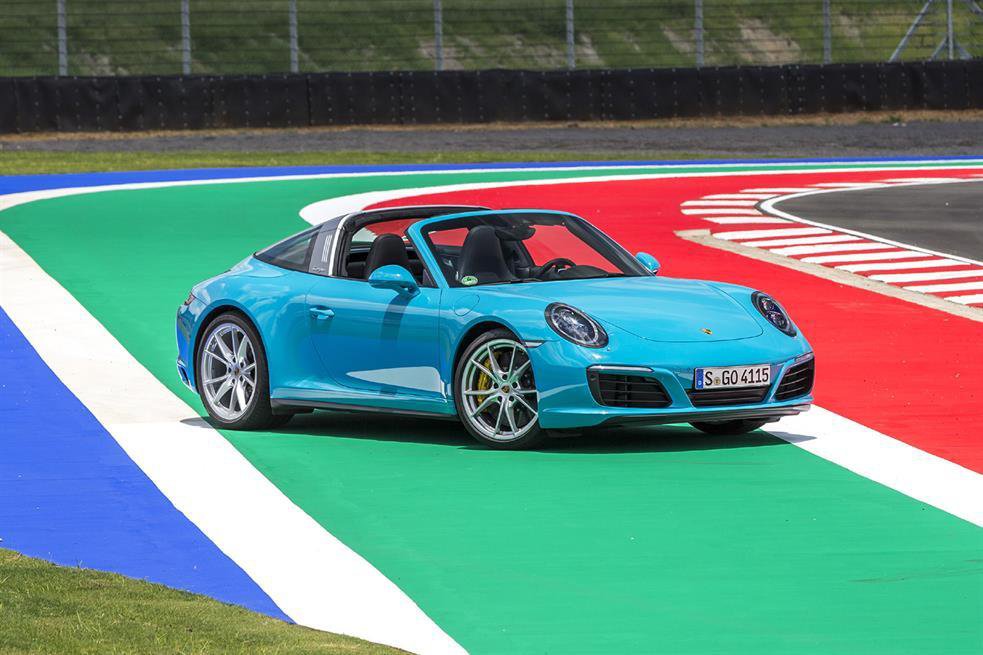 It’s nice to have choices in life, especially when they involve buying an open-topped Porsche 911. Should you go for the facelifted Cabriolet version, or the Targa equivalent that we’re testing here?

This is the latest Carrera 4 Targa, and despite the mild styling revisions, it’s a dramatically different car in terms of its engine. The iconic and highly regarded naturally aspirated 3.4-litre flat-six engine has been ousted for a more environmentally friendly twin-turbocharged 3.0-litre.

The downsizing seems to have worked. CO2 emissions have been reduced by nearly 8%, while fuel economy is up by around 7%, and it’s become more powerful, too. There’s a 20bhp hike, while torque is increased by 44lb ft, and significantly is developed at much lower revs, which should mean it’s more driveable.

There are some subtle styling tweaks, but only 911 aficionados will notice the new bumpers, headlights and rear spoiler. You might spot the horizontal light bar that stretches between the new rear tail lights though, which distinguishes all four-wheel-drive models from the rear-wheel-drive Carreras.

Porsche has added some new features, the highlight of which is an improved infotainment system with Apple CarPlay, a sharper screen, plus satellite maps and real-time traffic reports. There’s also an optional front ride-height control, allowing you to raise the nose when going over speed humps, and rear-wheel steering that sharpens up the handling.

It’s also safer thanks to options such as blind-spot monitoring and a secondary collision braking system. Both the Cabriolet and Targa are the same price, which in Carrera 4 guise starts from £90,240 - a hefty £3215 increase on the outgoing car.

Having driven other versions of the new turbocharged 911s and been impressed by their added low-end shove, the Targa 4 was a bit of a disappointment. Make no mistake, it’s still quick by normal standards, but gauged against other 911s, or a Mercedes SL 500, the Targa feels a little pedestrian. That’s down to weight, because the Targa carries 20kg extra mass compared with the Carrera 4 Cabriolet, and a whopping 90kg more than the Coupe.

If you rev it out in the lower gears it’s brisk enough, but when you try to overtake at higher speeds you realise you need to be up at 4000rpm and have a decent gap available. Revving it out does release the aural delights of the flat-six motor, which like the F-Type’s V6, adds to the sensation of driving a sports car.

You are often swapping gears though, but that’s no bother thanks to the delightful standard seven-speed manual gearbox. The clutch is lighter than in the outgoing car, and the gear lever is perfectly positioned and precise. If the idea of swapping gears yourself seems like a chore, then you can always order the optional PDK dual-clutch auto. This offers snappy, smooth changes, although it dilutes some of interaction you get from driving the manual.

One advantage of ordering the PDK is that if you also add the Sport Chrono pack this provides a drive mode selector and boost button on the steering wheel. A rotary switch lets you select from ever sportier driving modes, but whichever mode you’re in, a central boost button gives you 20 seconds of heightened response from the engine and gearbox.

The Targa’s extra mass is also felt in the corners. Whereas the Coupe feels pointy and precise, the Targa, like the F-Type Convertible, needs a little more time to change direction and settle mid-bend. That said, it remains a sportier beast than the Mercedes SL. It’s also got plenty of traction off the line and on the exit of corners, and the controls, including the beautifully weighted steering and progressive brakes, give you lots of confidence behind the wheel.

Open-top cars can often suffer from shimmy through the body due to a lack of rigidity as  a consequence of removing the roof. Not so the Targa, which feels almost as taut as the Coupe. It’s refined, too, thanks to a supple ride even over battered roads, and very little wind noise at speed with the roof up. You do get a bit of drone from the tyres, but no more so than in the Jaguar or Mercedes.

The roof is a little slow to retract compared with the F-Type, but when it’s down you are well cocooned and free from major buffeting, even at motorway speeds.

The Targa 4 looks functional inside, which has tended to be an enduring 911 theme, so if you want flamboyance, you might find the F-Type’s cabin more to your liking. The Porsche feels better finished though, a quality that it shares with the SL.

You can’t fault the driving position, which feels like it was made to measure thanks to the perfectly placed steering wheel and pedals. There’s also lots of adjustment to the steering wheel and seat, so whatever height you are, you should have plenty of room up front despite the snugness of the cabin.

The new infotainment system is a welcome upgrade, as the previous version was rather slow-witted. It’s now snappier as you swap between menus and pairing a phone or entering a destination into the sat-nav is straightforward. It’s still not the best system on the market, but it has fewer foibles than either the Mercedes or Jaguar units.

Neither of those rivals have back seats, so if you have small children the 911’s rear seats could prove useful. Even if you don’t, the extra storage space they offer combined with a reasonably sized boot makes it more practical than the F-Type. Unlike the SL, it doesn’t get any smaller with the roof down, either.

On balance, this is probably the least desirable of all the 911s on sale. In isolation it might feel good to drive, but it feels a long way removed from the Carrera 2 or 4 Coupes for genuine excitement. The Carrera 4S Targa gives you more pace, but that costs the thick end of £100,000.

If you aren’t looking for the ultimate driver’s car, then take a look at the F-Type 3.0 AWD Roadster and Mercedes SL 500, which are both considerably cheaper and offer similar enjoyment with the roof down.

Should wind-in-your-hair motoring in a Porsche be an unfulfilled dream, then try a 911 Carrera 4 Cabriolet, which retains a little more of what’s great about the 911. Or better still, save yourself a whole heap of cash and buy the utterly brilliant Boxster S instead.