Even more powerful drop-top Porsche 911 Turbo is better than ever, if still not our favourite version of the 911... 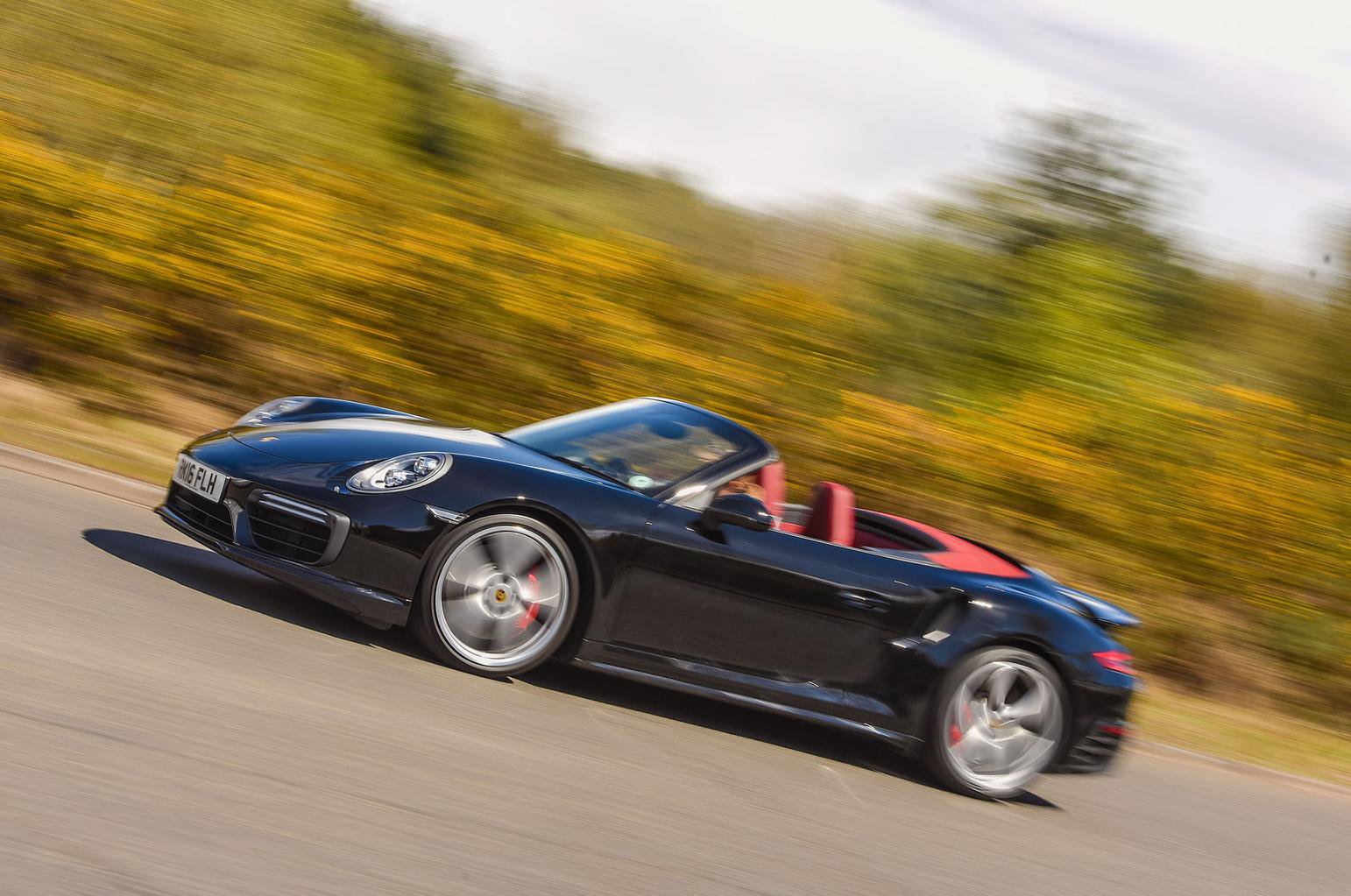 The Porsche 911 Turbo has always been somewhat less dynamically effervescent than its more purist, rear-wheel-drive counterparts. More about the straight-line pace, and less about the twisty stuff – and that applies even more for the heavier, less rigid 911 Turbo Cabriolet.

The biggest news for this facelifted model is that the 3.8-litre six-cylinder gets new, more potent turbos (two of them, no less), which lift power and torque to 532bhp and 489lb ft. Adaptive dampers, Sport Chrono pack complete with driving modes, four-wheel steer and the seven-speed dual-clutch PDK automatic gearbox are all standard, as is, of course, the active four-wheel-drive system.

So have the upgrades made the new 911 Turbo Cabriolet more thrilling and purist-appropriate, or does it remain one of the least recommendable 911s?

This is still a car that’s defined by its two-faced nature; the way it can switch from a gut-wrenching, laugh-out-loud rampage to a pussycat-pleasant mooch is extraordinary.

Yet, while the headline news for this update is the extra power, it’s actually the fact that the handling has improved that deserves the most credit. Our test car did without the optional active anti-roll bars (known as PDCC in Porsche speak), but still delivered an edge of playfulness to its handling that’s new to the previously more neutral-feeling Turbo.

It turns in with the same heroic grip levels, but you can now feather the throttle to encourage some slip at the rear wheels, for a manageable yet more exciting cornering habit. It’s subtle, and there’s no doubting that the Turbo remains a more heavy-handed thing than the rear-wheel-drive Carrera models, let alone the sublime GT3, but it is now more engaging than it was.

And the sufferance brought about to the handling by the soft-top? Honestly, you’d need to drive the Cabriolet and coupé models back-to-back to really feel the difference. The extra weight might tell in the way the Cabriolet starts to wash wide through fast corners a touch earlier than the coupé, but the body feels rigid, and anybody who likes a drop-top really isn’t going to be disappointed in any way.

The more noticeable compromise is in ride comfort, where the Cabriolet resorts to a more jarring initial bump absorption than the coupé. It’s still more than acceptable (despite standard 20in alloys) given that this is a seriously intense sports car, but even in Comfort mode you’ll occasionally be wincing over sharp-edged intrusions.

Overlaying all of this is the devastation of that engine. Choose to unleash the full force of it, and it’s a proper kick in the guts. Just twist the steering-wheel mounted driving mode switch into Sport or Sport Plus to gee the slick-shifting gearbox into rapid-fire mode and activate the overboost function, and you get a fraction of a pause before it fires you forward at a truly shocking rate of acceleration.

In the more moderate ebb and flow of real-world use, it’s a scale of performance that you can use as aggressively or sedately as you wish given its fairly unintimidating power delivery.

The easy-living nature continues inside the 911 Turbo Cabriolet. Electrically adjustable sports seats are standard, and move in every direction you’d want while delivering plenty of support, while the standard colour touchscreen and sat nav system is a clear focal point that’s easy to use and offers all the connectivity and audio functions you could want.

It’s refined, too – an electronically-raised wind deflector is included, and with that up you’re well protected from buffeting with the roof down, even at higher speeds.

Tyre noise is the most biggest intrusion with the roof up – a constant background rumble even at lower speeds – but few will be bothered. Wind and engine noise are noticeable, but are quite well suppressed and it’s easy to have a conversation with your passenger at fast cruising speeds without raising your voice.

The two cripplingly uncomfortable seats in the back still feature, and really are best used for luggage, although smaller children will undoubtedly endure travelling in them when necessary. A small but deep boot space in the front of the car will take a couple of soft weekend bags, making the 911 Cabriolet about the most practical of its ilk.

Visibility is good for this class of car, too; there’s certainly still a big blind spot to the rear three quarters, and you’ll be grateful for the standard rear parking sensors, but there’s a good view forwards, and better rear visibility than any rival.

This is always a tricky question with a 911, since there isn’t a bad one in the bunch, but we also have definite favourites in the form of the more vivacious-handling and substantially cheaper rear-wheel drive Carrera and GT models.

That said, if you really fancy mind-blowing performance with the added security of four-wheel drive and the flamboyance of a soft top, then this version is hard to fault. Certainly, even with the standard carbon ceramic brakes and active anti-roll bars of the even more potent Turbo S, there is absolutely no need to step up from this standard Turbo. You’re not going to feel the extra 10th of a second to 62mph that the S offers, and this car has more performance than anybody anywhere ever needed, or indeed is ever likely to make use of.

Plus, the non-S is expensive enough as it is – even though you could also argue that it’s cheaper than even more rarefied rivals, such as the Lamborghini Huracan Spyder, which offers similar performance but justifies its vastly higher price with an overtly dramatic, thoroughbred-supercar badge and character.

More pertinent to the 911 Turbo is the forthcoming Audi R8 Spyder, which’ll be close on price and performance, and which you should wait to try before committing to the 911. *What Car? says... **