The Seat Ateca 2.0 TSI 190 4Drive FR is the most powerful petrol variant to date and is only available in Seat's sportiest trim level...

Let's say you want to buy something that puts the sport in sport utility vehicle. What do you go for? While there are lots of options if you’ve got more than £40,000 to spend, there’s less choice if your budget is a little more modest.

That’s where the Seat Ateca FR 2.0 TSI 4Drive 190 comes in. Under the bonnet is a 2.0-litre turbocharged petrol engine with 187bhp that’s coupled to a seven-speed dual-clutch automatic gearbox and four-wheel drive. That’s enough for 0-62mph in a brisk 7.9sec.

Despite the sporty FR bodykit and flashy wheels, the suspension is unchanged from regular four-wheel-drive Atecas. Can a punchy petrol engine turn this Spanish SUV into a baby Porsche Macan Turbo or would you be better in a lesser Ateca? 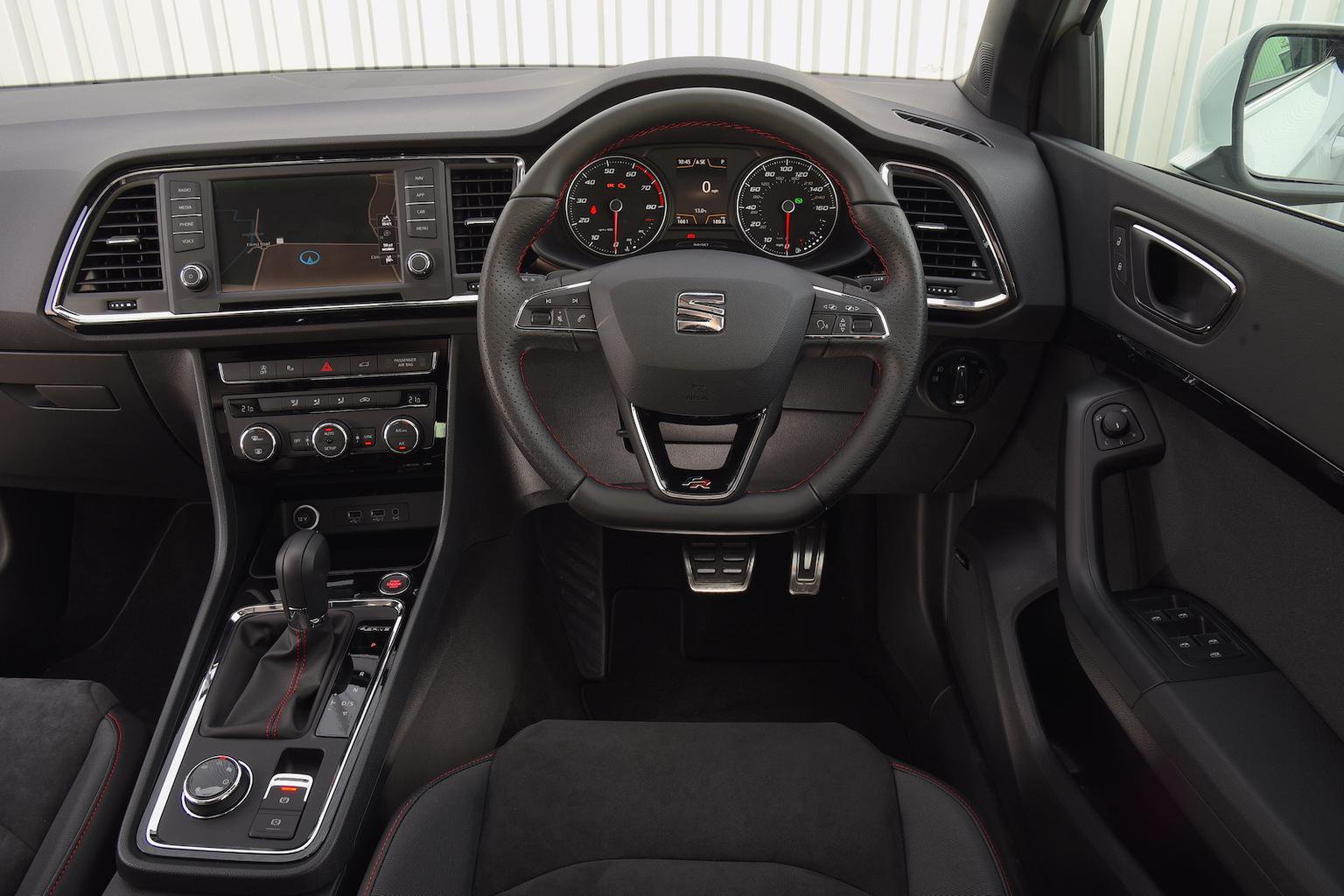 Seeing as this 2.0-litre lump is only available in FR trim, you might expect it to be the performance figurehead of the range. Surprisingly, the heavier 187bhp diesel is the faster-accelerating car, thanks to its additional torque.

On the road, the diesel’s extra muscle is even more apparent. While the TDI pulls strongly from around 2000rpm, you have to be prepared to explore the upper reaches of the rev range in the TSI if you want to make swift progress. Even then, the Ateca only ever feels brisk rather than outright fast.

Of course, there are advantages to the petrol engine. For a start, it’s a more refined unit than the equivalent diesel; there are fewer vibrations sent through the steering wheel and pedals, plus it’s quieter at idle, while cruising and when you’re poking it with a stick. An automatic gearbox is the only choice here; it's smooth to shift for the most part but can be hesitant at low speeds.

The flip side of the coin is that it’s likely to be pricier to run. Official economy might be listed as more than 40mpg, but expect low 30s in typical use or even less if you’re making use of all 187bhp. Predictably, carbon emissions are much higher than the equivalent diesel, but it’ll only cost business users 1% more in benefit-in-kind tax.

Our test car came equipped with optional 19in wheels that looked great but didn’t do the ride any favours at all. Atecas (especially four-wheel-drive ones) have a firm edge at the best of times; throw in big wheels and you’ve got an SUV that fidgets on the motorway and thumps through potholes.

The upshot is that there’s generous grip should you want to go quickly. All FR models get a variable ratio steering system that gets faster the more lock you apply. Although it sounds a little odd, you soon get used to the steering speeding up and it makes tight turns a breeze. The downside is that there’s no real sense of connection to the front wheels.

Even so, the Ateca remains an SUV that can out handle many a hatchback. There’s precious little body lean so it feels surprisingly agile for such a tall thing and the four-wheel drive gives unflappable traction. 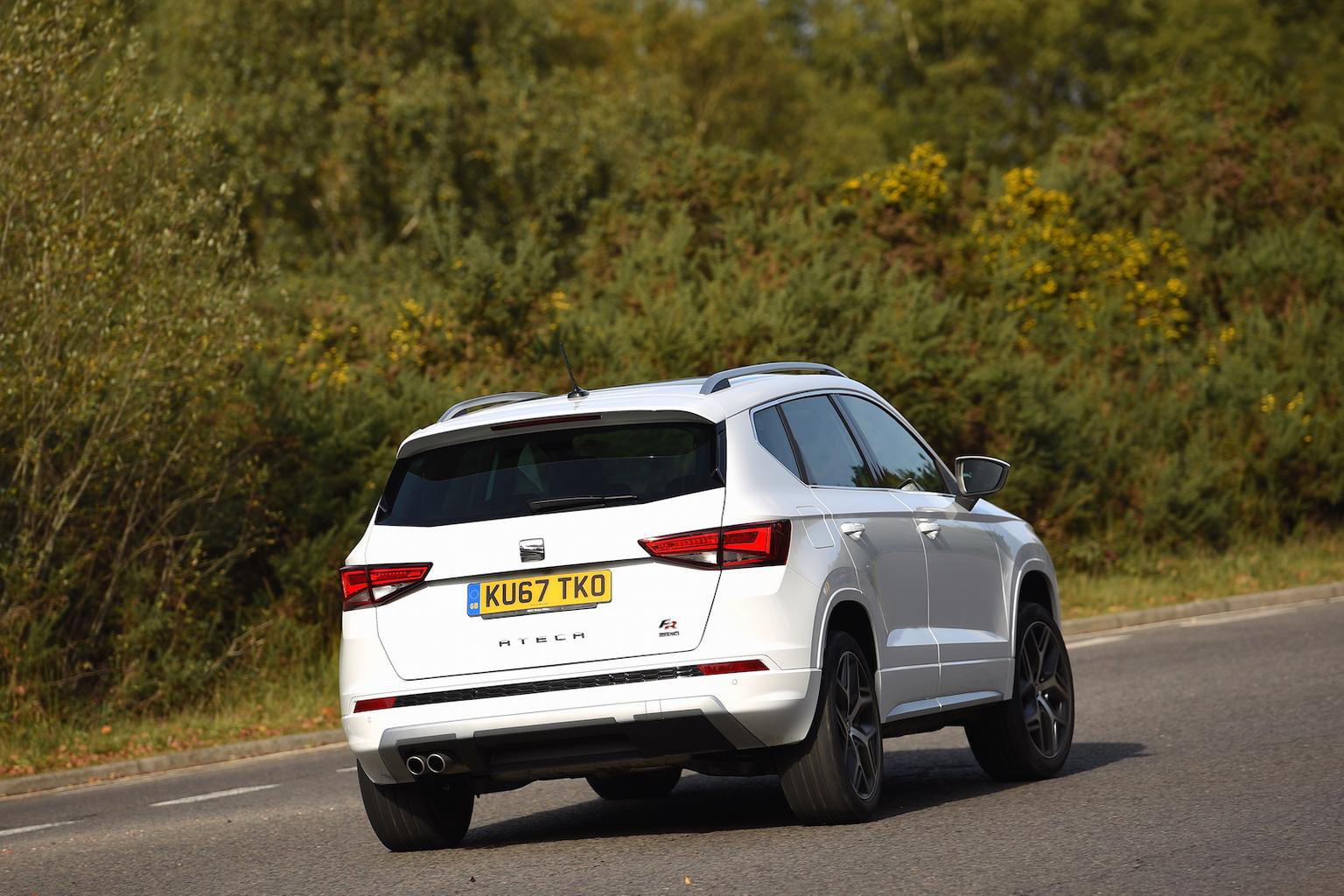 The sporty makeover continues inside. As standard, you get Alcantara-clad sports seats, tinted rear windows and multi-coloured ambient LED lighting. Chuck in a leather-wrapped steering wheel with FR badging and some chunky alloy pedals and there’s just enough to remind you of the car’s sporting intent.

As for the rest of the interior, it’s unchanged over the standard car if you look past the racy garnish. To find out just how practical it is, have a look at our full 16-point review for our detailed impressions.