We drive the new Porsche 911 GTS for the first time to find out if it's the best version of the German brand's flagship sports car...

Ask us which version of a Boxster, Cayman or even Cayenne Coupe to go for and we’ll answer without a moment’s hesitation: the GTS. Those three letters stand for Gran Turismo Sport, a nod to Porsche’s racing heritage, but have come to signify the ultimate road-focused version in any of the famous German brand’s model ranges.

To that end, you normally get an engine with more cylinders and more power, along with various chassis tweaks to benefit cornering. There’s an inevitable price hike, of course – but it's nearly always been one worth paying.

The latest car to get the GTS treatment is the Porsche 911. There have been GTS versions of Porsche’s flagship before, of course, but not of the latest version, codenamed the 992. As expected, you get more power for faster acceleration and different suspension for better cornering, plus you also get some visual and luxury upgrades. 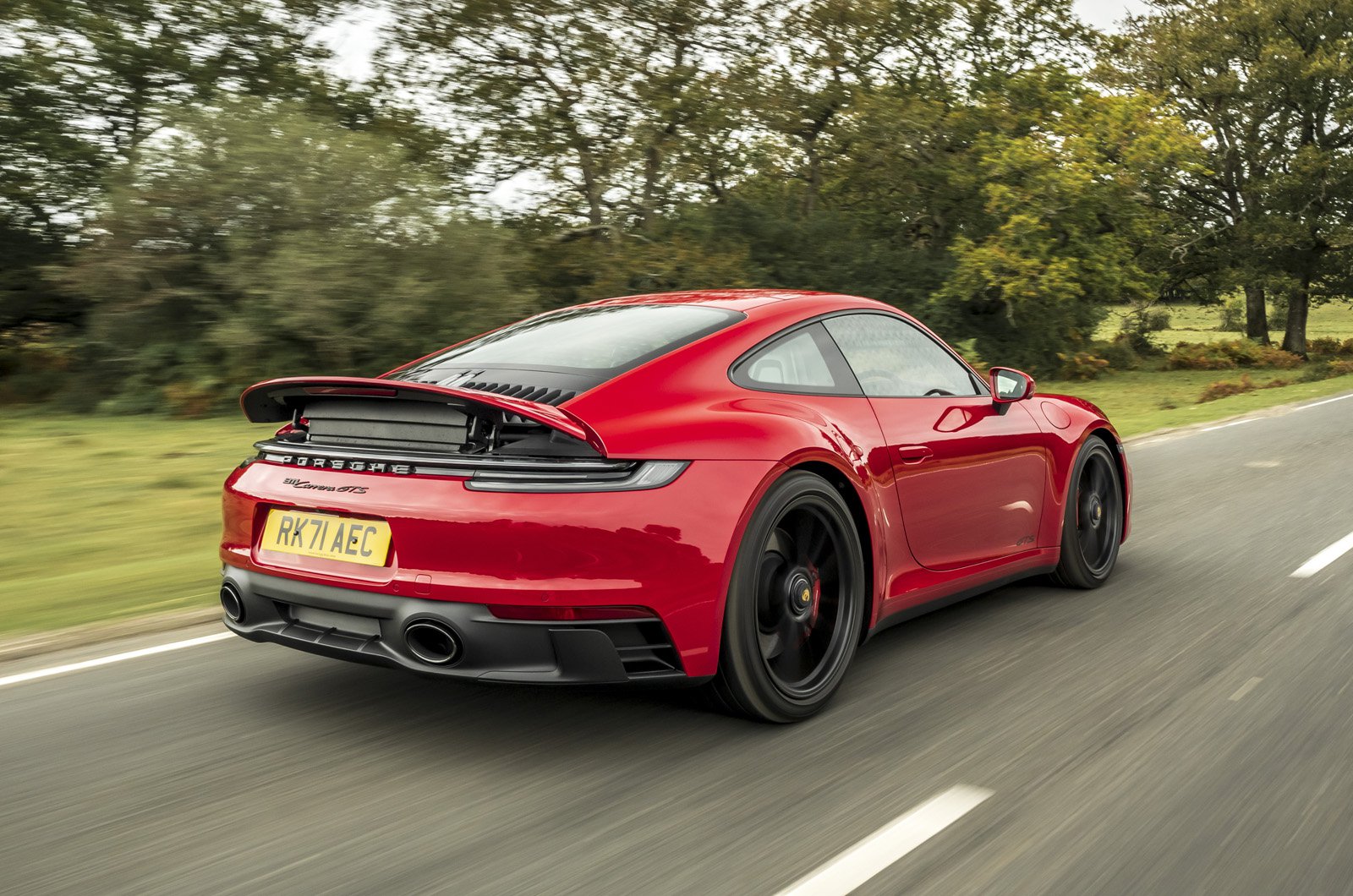 That’s a good thing because the GTS isn’t cheap. It costs more than £110,000 for the hardtop Coupe version – roughly £12,000 more than an equivalent Carrera S. If you want the Cabriolet with a folding fabric hood, that’ll cost you an extra £10,000, with the folding hardtop Targa adding a further £5000 or so to that price.

The Targa comes with four-wheel drive as standard, but if you want that on your Coupe or Cabriolet (we wouldn’t bother, and we'll explain why later) you’ll need to find a further £5500. So, we’re very much in Audi R8 territory here, a rival mid-engined supercar with a 5.2-litre V10 engine.

The GTS packs an extra 30bhp and 15lb ft of torque than the cheaper Carrera S, but it manages that with essentially the same engine. Software tweaks allow the turbochargers strapped to the 3.0-litre flat-six engine to conjure up a little more pressure. 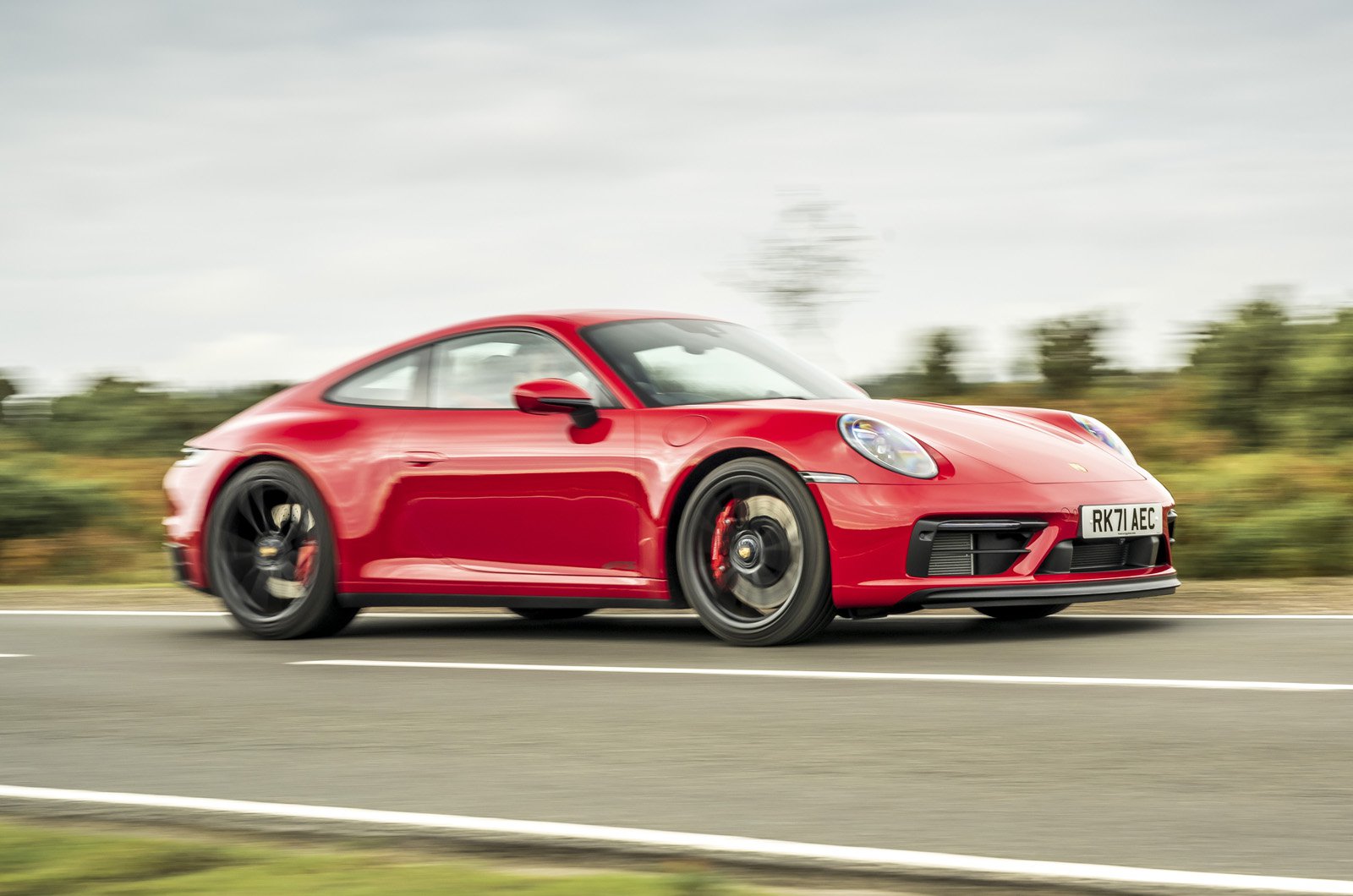 The 0-62mph time drops slightly (from 3.7sec to 3.4sec in the rear-wheel drive Coupe), although part of the reason for that is because the GTS comes with the Sports Chrono Pack, and therefore launch control, as standard. You have to pay extra for it on the Carrera S.

In truth, you’d need to drive one car straight after the other to notice the difference in acceleration. Both are ridiculously rapid and the GTS can, on paper at least, even out-accelerate the much more powerful Audi R8 RWD.

You’ll enjoy listening to that car’s V10 engine far more, though. Not that the GTS’s motor sounds dull. In fact, the shriek approaching and beyond 7000rpm is really quite wonderful, and is amplified by the sports exhaust system that comes as standard. The combination of the bassy resonance at low revs and the whistles from the turbocharger is somewhat less tuneful, though. 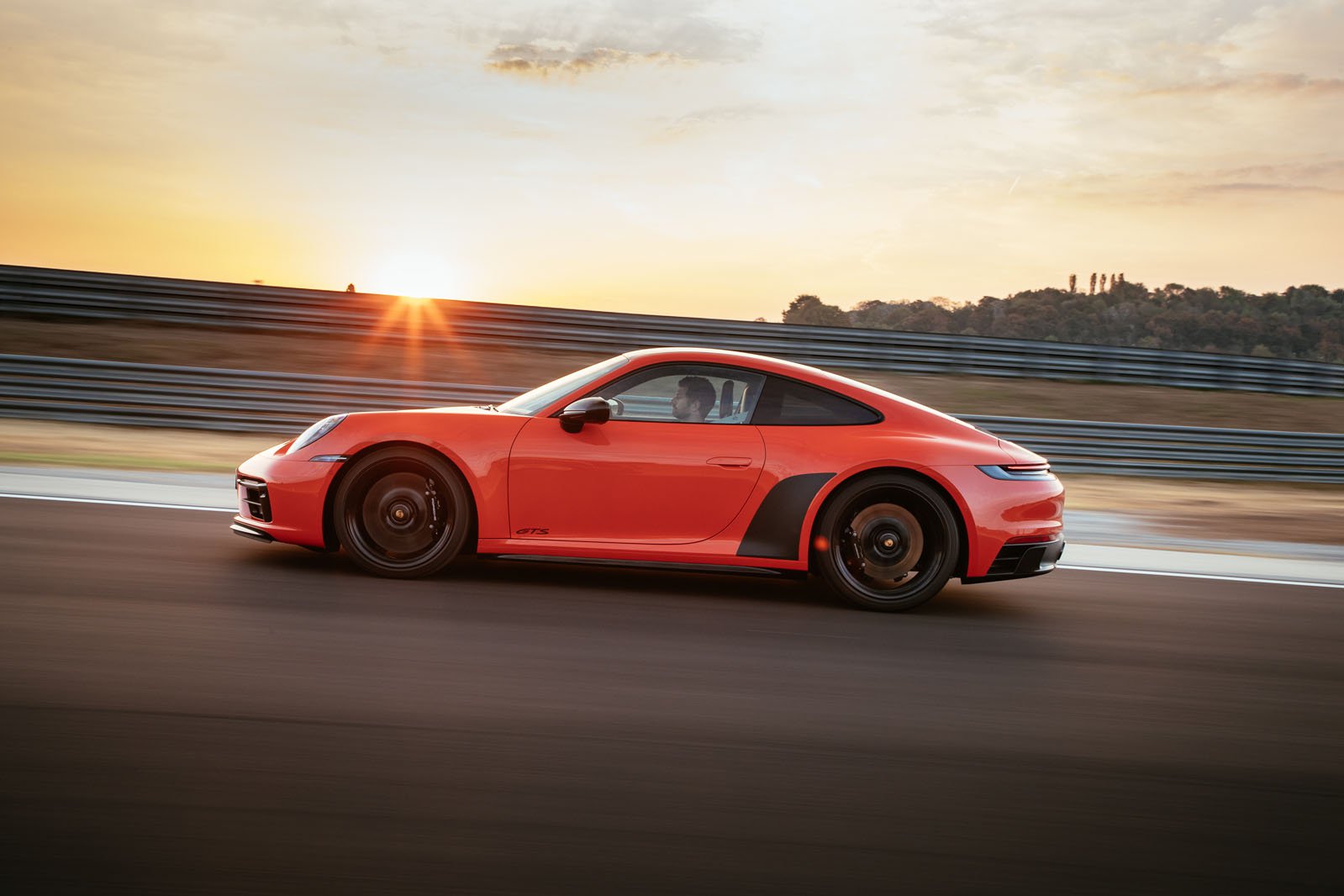 The GTS comes with an eight-speed PDK dual-clutch automatic gearbox as standard – the best of its type found in any sports car – and most buyers are expected to stick with this.

Alternatively, you can opt for a seven-speed manual for no extra charge, and the lever is 10mm shorter than in the Carrera S for an even more satisfying shift. You won’t accelerate or go round a track quite as quickly if you go for the manual, but it will give you a rawer, more old-school (and arguably more interactive) driving experience. The choice is yours.

To slow you down better, the GTS borrows its brakes from the more powerful 911 Turbo, with carbon ceramics available as a £6321 option. Only consider these if you plan to take your GTS on track days regularly because the standard brakes provide incredible stopping power and stand up really well to hard use. 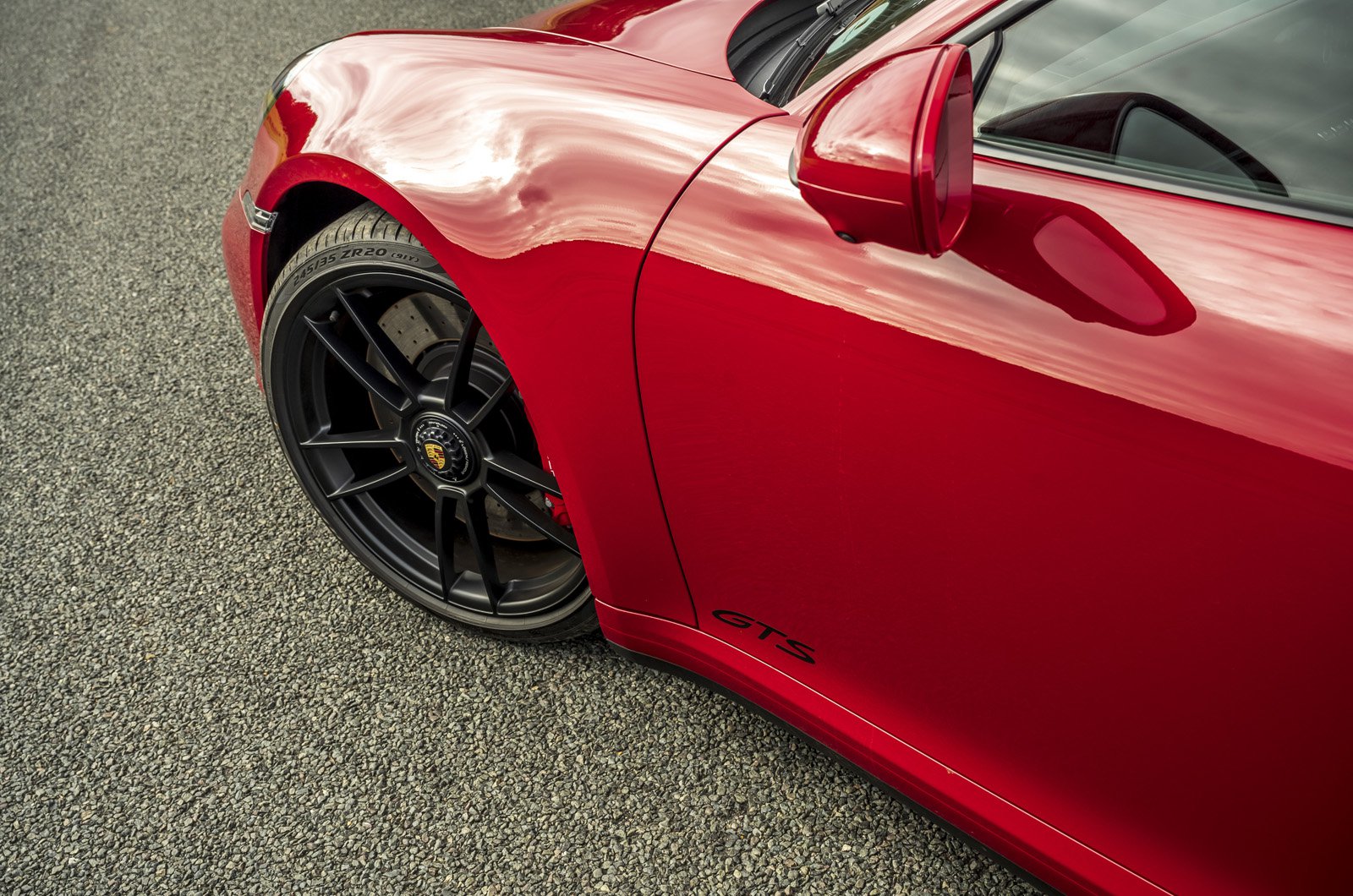 The suspension is largely borrowed from the range-topping Turbo S. However, it’s been tuned slightly differently and lowered by 10mm. Combined with big alloys also borrowed from the Turbo S (20in at the front, 21in at the rear) it makes for a fairly firm ride. By sports car standards it’s still perfectly acceptable, but if you want a more easygoing daily driver, you can delete the lowered suspension for no charge.

Even so, the entry-level Carrera is likely to prove a bit more agreeable – especially around town. What it won’t do is go round corners as quickly. We first drove the four-wheel drive GTS both on the road and track, and it’s a staggeringly capable machine – arguably too capable for the road. Even in the wet, you can carry an incredible amount of speed along any country road, firing yourself out of hairpins with barely any wheelspin. The cheaper, lighter rear-wheel drive version is a little more playful and delicate when you push hard, so it’s the one we’d go for if buying a GTS.

The changes inside aren’t dramatic. The GTS has the same fundamental driving position, infotainment system and interior layout as the cheaper Carrera and Carrera S. Read our full Porsche 911 review for the lowdown on all that stuff. 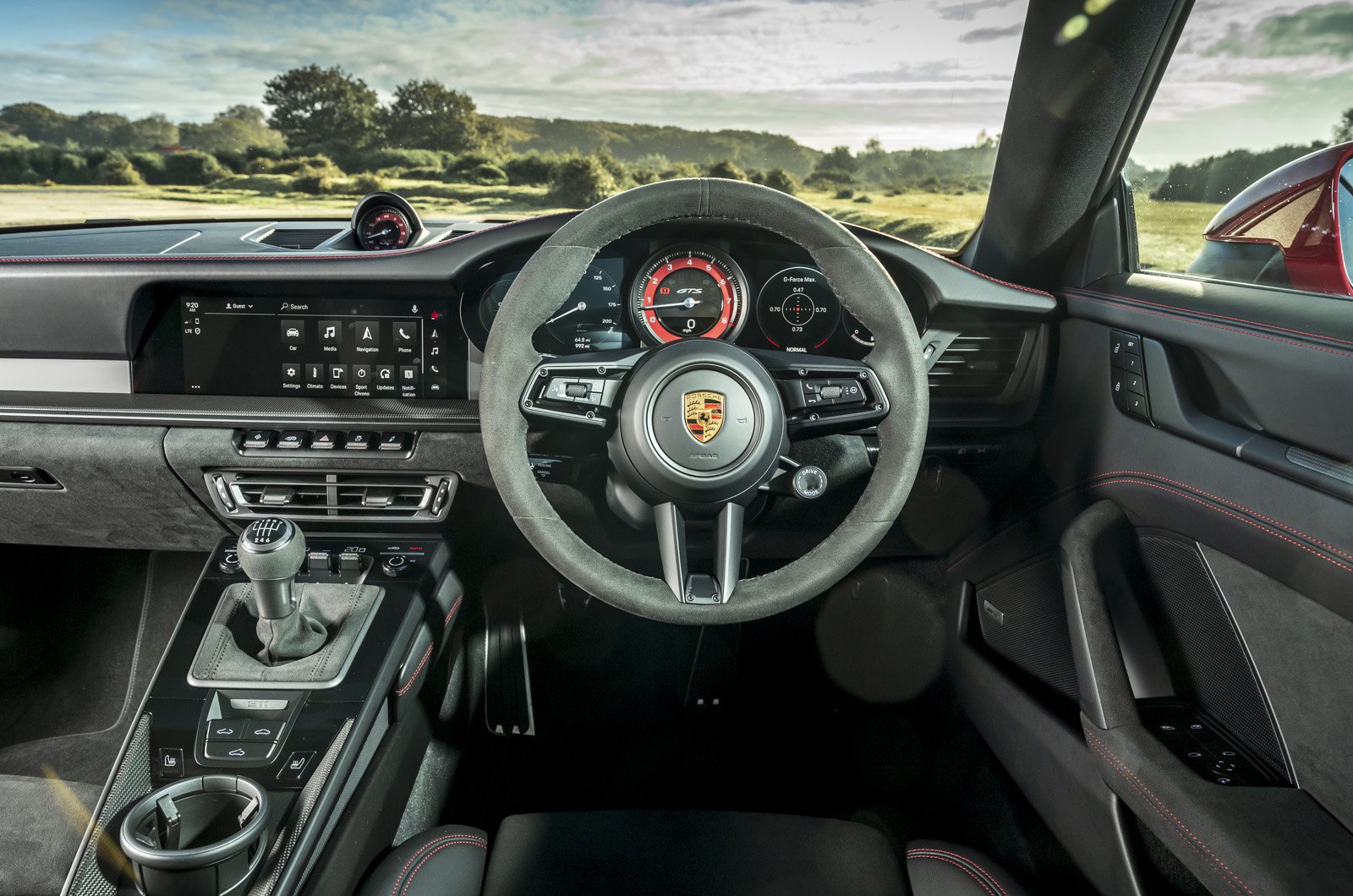 You do get Sport Seat Plus as standard (a £324 option on cheaper 911s), which really just means there’s a bit more support around the shoulders, along with GTS logos on the headrests. The seat centres, front and rear, are also trimmed in Race-Tex (faux suede), as is the steering wheel rim and, on manual models, the gearlever. It’s the same stuff you’ll find in the Porsche 911 GT3.

An optional Lightweight Pack will be available in the near future. It saves 25kg by fitting thinner glass, switching the seats for carbon-backed buckets and swapping the battery for a lighter version. This package also adds rear-wheel steering for better agility at low speeds, but you do lose the rear seats and some sound deadening. It's expected to cost just under £6000, which is a lot of money when 25kg isn’t much weight by modern car standards.

On the outside, the GTS looks surprisingly different to a Carrera S thanks to Porsche’s SportDesign Package. It adds a restyled front apron and moves the rear numberplate up from between the tailpipes into the main bumper area. It’s enough to make it obvious to anyone vaguely in the know that you're not driving a cheaper Carrera or Carrera S.