* Our least favourite cars * Read about them * Find out why we chose them... 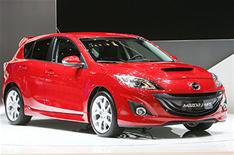 The new, muscular-looking Mazda 3 now has the mouth to match its trousers in the form of the 3 MPS.

The beefed up version of its small family hatch has a new air-intake, a larger rear spoiler, lower suspension and wider tyres on its 18-inch wheels to mark it out from the rest of the range.

The 3 MPS is powered by the 258bhp 2.3-litre petrol engine from the current MPS hot hatch, but aerodynamic improvements make the car a full 5% more fuel efficient than the model it replaces. Power is transferred to the front wheels through a six-speed gearbox.

0-62mph is knocked off in 6.1 seconds and the car is capable of hitting 155mph the same as the current MPS.

Why we didn't like it Performance cars shouldn't have a front end that makes them look like a basking shark.