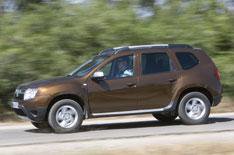 The Dacia Duster is an SUV that is the first in a wave of new Dacia (pronounced Dat-chya) models due over the next couple of years.

Dacia is a budget brand that's owned by Renault, and it's popular in a number of countries across Europe and around the world.

The idea of the Dacia brand is simple it builds basic cars that give customers the greatest possible space for the smallest possible price.

The Duster is Dacia's newest offering in foreign markets, and it'll eventually go on sale here in the UK, too, although not until mid-2012.

Essentially, it's a compact SUV that's roughly the size of a Hyundai ix35 and Nissan Qashqai. Like these rivals, it'll be available in both two- and four-wheel-drive formats, but will cost a fraction of the price of either.

The question is, will the Duster be too basic for UK tastes? We've been to Morocco to find out.

Whats the Dacia Duster like to drive?
Considering the Duster's brief demands little more than providing cheap transport, it would be unfair to expect too much dynamic prowess. However, it has one or two surprises in store.

You won't find them in the way the car handles. There's a fair amount of body lean in bends, while the steering is too heavy at low speeds, too light at high speeds and short of feel and accuracy.

Neither will you find them in the refinement department there's plenty of wind- and road noise, the petrol engine drones noisily at speed, and the gearshift is notchy and imprecise.

No, the surprise lies in the ride quality and it's a pleasant surprise. Okay, it's not the most civilised thing you'll ever drive, but it stays comfortable on pretty much any surface.

It's particularly good at taking the sting out of really nasty bumps and potholes, so it just gets better as the roads gets worse. That bodes well for how it'll deal with battered UK roads.

The entry-level 103bhp 1.6-litre petrol engine is gutless as well as noisy; the 84bhp 1.5-litre diesel is much more alert it's flexible and much quieter than the petrol.

There's also a 106bhp version of the diesel, and both give affordable running costs.

Whats the Dacia Duster like inside?
You get what you pay for, and there's no doubting the Duster's budget status. The materials make no attempt to be squashy or swanky, focusing instead on being tough and hard-wearing.

The no-frills switchgear has been lifted from various Renault and Nissan models, and there's nothing particularly clever about how the seating works.

However, it has the important bits nailed there's loads of interior space, five comfortable seats and a big boot.

That's good news for families on a budget. The Duster's interior is unashamedly functional and the basic feel gives the car a certain honest charm, too.

Should I buy one?
All in all, the Duster is capable, if a bit unremarkable. However, we haven't got to the remarkable bit yet the price.

In France, prices start at 11,900 Euros, and at today's exchange rate, that equates to roughly 10,400 that's less than you pay for most mainstream superminis.

It undercuts the cheapest Skoda Yeti by around 3500 and the entry-level Nissan Qashqai by almost 7000.

Granted, equipment levels will be basic. Entry-level versions will come with remote central locking, electric front windows, a split-folding rear seat and four airbags, but not much else.

Upper-tier versions have air-conditioning, front foglamps and electrically adjustable door mirrors, while alloys and stability control will probably be cost options across the range. Still, at such a low price, it'd be churlish to expect much more.

A lot can happen in two years, especially in such uncertain economic conditions, so it's anyone's guess how much the Duster will actually cost when it finally lands on UK soil.