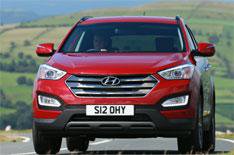 Hyundai has ramped up everything a notch with the latest Santa Fe. For a start, the cars sharp-edged styling is much more confident than its anonymous predecessors.

The engineering division has honed the 194bhp 2.2-litre turbodiesel engine, making it more efficient; the cabin is said to be better finished than ever; and the price has taken a hike by more than 1700 in the case of the entry-level model. Given that billing, the car has a lot to live up to.

Whats the 2012 Hyundai Santa Fe like to drive?
On the road, the 2.2-litre engine is a refined companion at cruising speeds (wind noise from the huge door mirrors easily drowns it out), but there is a bit of rumble and vibration through the pedals if you suddenly demand hard acceleration.

The optional automatic transmission is slick-shifting and intelligent; however, it adversely affects the cars fuel economy and CO2 emissions, so wed suggest you try the manual version first.

The ride quality is firm but pretty well judged; you wont be bouncing around in the seats on scarred roads, and the body control is sufficient to guard against excessive lean in corners. If only the steering were similarly accomplished; its pretty inconsistently weighted. Theres a button that lightens it for urban manoeuvres and parking - a handy feature, given the Santa Fes considerable size.

Whats the 2012 Hyundai Santa Fe like inside?
The cabin is certainly pleasant. The new fascia is quite cluttered with buttons, but it looks smart enough and is nicely finished; you also get the trademark SUV elevated driving position.

Theres plenty of space up front, and should you opt for a seven-seat version (a 1200 premium), the middle row of seats can be moved back and forth to free up legroom in the third row. Adults will still complain of headroom in the rearmost pews, mind you - and even the centre passenger in the middle row is likely to grumble about the hard middle seat.

You get into the back row only through the passengers side of the car, too; in that respect, at least, the Santa Fe is nowhere near as flexible as a traditional MPV such as a Seat Alhambra.

The boot is tiny with the third row of seats in place, although at least they fold pretty flat when you want them out of the way - and the loadspace is huge and rectangular if you use the car as a five-seater.

Should I buy one?
Hyundai has raised the prices for this generation of Santa Fe, although cheaper variants should come along once the company starts selling versions powered by a 2.0-litre turbodiesel instead of the 2.2.

Theres no escaping the fact that the Santa Fe is no longer the steal it once was - but its an excellent package that is considerably better than cheaper rivals such as the Chevrolet Captiva.