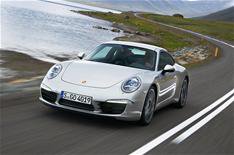 What is it? It's the new generation of Porsche's iconic 911 sports car.

Codenamed 991, this version gets a longer wheelbase, revised powerplants that are more powerful and more fuel-efficient, lighter bodywork, and a cabin and fascia influenced by the larger Panamera.

There's also a revised chassis set-up that includes a switch to electro-mechanical power steering, and a world first: a seven-speed manual gearbox. The new model is 56mm longer (at 4491mm), 65mm wider (at 1873mm) and 11mm lower (at 1299mm) than the car it replaces.

The wheelbase stretches too, by 10cm and that's probably the change that's easiest to notice when you see the new car's side profile.

The 911's engine stays firmly out at the rear, of course, but the motors themselves get a refresh. The models at launch will be the Carrera, which now has a 3.4-litre flat-six engine producing 345bhp and 288lb ft of torque, and the Carrera S, which gets a revised 3.8-litre motor producing 394bhp and 325lb ft.

Performance, as you might expect, is brisk; equipped with a PDK dual-clutch gearbox, the Carrera S can reach 62mph in 4.3 seconds and a top speed of 188mph. Weight-savings of around 40kg help it to an average economy of 33mpg and emissions of 205g/km with the PDK transmission improvements of 10% and 15% respectively.

The Carrera, meanwhile, dips under 200g/km for the first time, but only with the PDK transmission.

What's it like to drive? Monumentally fast, for starters. Only the more potent S variant was available at Porsche's launch venue in California, and it lived up to its billing, with colossal performance, huge lateral grip and a dogged determination to hang on through long, sweeping corners.

The flat-six engine sounds as good as ever especially above 6000rpm.

We tried both the PDK transmission and the new manual. The three-pedal system does offer the satisfaction of changes, of course, and the PDK's stick is all the more frustrating because it uses the unintuitive layout of 'push to change up, pull to change down'.

However, having seven gears does mean that you need to focus on what gear you're in, particularly since the shift needs a positive throw for a rapid change. It doesn't feel quite as crisp a unit as the (extremely slick) six-speed from the outgoing car. Sad to say it, but this means that in many situations the PDK paddles come into their own.

The steering is precise and totally trustworthy; you'll feel confident to commit to it within minutes. No, it's not quite as communicative as the outgoing car's hydraulic set-up, but it's good enough when pushing on for you focus on other things beyond the fact that it's not giving you chapter and verse on what the front wheels are doing. Odd, but true.

The longer wheelbase does change the 911's character and for the better. Most pleasingly, the tiresome road noise that has bothered generation after generation of 911 has been much reduced nearly eradicated altogether, in fact.

Slip either transmission into seventh at motorway speeds and the Carrera S is an entirely civilised companion, soaking up the worst surfaces (and this despite the Carrera S standard wheel size increasing from 19-inch to 20-inch).

What's it like inside? From the driver's seat, very much like a Porsche Panamera; that car's dashboard layout, with a huge centre console and transmission tunnel, has been transferred to the sports car.

The trademark five-dial instrument panel remains, but the steering wheel is now adjusted electrically. The seating position remains excellent, although you might want to spec body-hugging sports seats if you're planning on regular track work.

The sat-nav screen still has a cluttered button layout beneath it, although the display itself is very clear.

The front boot capacity remains the same, at 135 litres; you can also fold the rear seats down to create a further 205 litres of space there. That could prove a popular option, since the rear seats themselves aren't suitable even for children.

Should I buy one? Yes, and not only if you are in the market for one of the most charismatic sports cars on the market. Fact is, the latest 911 is such a well-rounded device that it's actually capable of filling the roles of B-road hooligan and refined GT. That makes it a very remarkable achievement indeed.