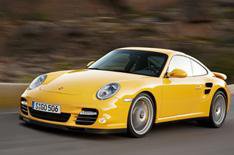 This is the all-new Porsche 911 Turbo.

It's quicker and more powerful than before, but also more fuel efficient.

The twin-turbo 3.8-litre engine has direct fuel injection and produces 493bhp, a 20bhp increase over the current car.

It takes just 3.4 seconds to blast the car from 0-62mph, which is half a second quicker than the present model. Maximum speed is up to 194mph.

A six-speed manual gearbox comes as standard, with Porsche's seven-speed PDK dual-clutch semi-automatic transmission as an option. A paddle-shift system will be available for the first time.

The new engine is more economical, too, despite the increase in power. Average fuel economy ranges between 24.1- and 24.8mpg depending on transmission and CO2 emissions have been slashed by almost 18%.

Even better handling
Changes to the four-wheel-drive and stability systems have made the 911 Turbo more agile and precise, according to Porsche, while its Porsche Torque Vectoring system which controls the balance of power between the rear wheels for maximum poise is a new option.

Standard equipment includes Bluetooth and MP3 connectivity, as well as a tracking system to help guard against theft.