It's expected to hit UK showrooms by the end of the year, with prices starting at around 25,000.

This third-generation Santa Fe is all-new from the ground up and promises superior refinement, space, on-road ability, quality and running costs compared with its popular predecessor.

The most striking difference over the outgoing Santa Fe is the smart design that uses some of the same styling cues as Hyundai's latest saloons and hatches.

Similarly, the new Santa Fe benefits from big advances in design and quality inside. The dashboard layout is all-new and the European versions will use better quality materials than the US-spec version shown here in New York. As with the current car, it will be available with either five or seven seats.

The UK-spec Hyundai Santa Fe will be available with four-wheel drive only, and will be powered by the same 198bhp 2.2-litre turbodiesel that's in the current car, albeit with CO2 emissions cut from 176g/km to 145g/km, and is available with a six-speed manual or optional six-speed auto gearbox.

Hyundai is yet to decide whether UK dealers will also sell a new manual-only 2.0-litre 148bhp diesel as well.

The new Santa Fe will run on front-wheel drive in normal conditions. However if sensors detect a loss of traction up to 50% of torque can be sent to the rear wheels.

Hill descent control comes as standard, as does Hyundais Flexsteer system, which allows you to select one of three steering settings to change weight and precision.

All three rows of passengers get more space than in the current model, and luggage space with the third row folded down is now deeper and boosted to a respectable 537 litres.

Exact specifications are yet to be revealed but you can expect more standard equipment and a larger options list than in the current Santa Fe. More safety kit is a certainty, with items such as a lane departure warning on offer alongside the standard roster of seven airbags.

An 'explosive' bonnet designed to protect pedestrians in an impact is also standard. Hyundai is promising a five-star NCAP crash-test rating as a result.

Hyundai has also revealed a long-wheel-base version of the new Santa Fe that has, according to Hyundai, 16% more space behind the rear seats. The car will be coming to Europe next January, but it won't have the 290bhp V6 petrol engine that's in the New York show car. European customers will be able to buy the stretched Santa Fe with the 2.2-litre turbodiesel. However, there are no plans to make the car in right-hand drive, so UK buyers are unlikely to get this option. 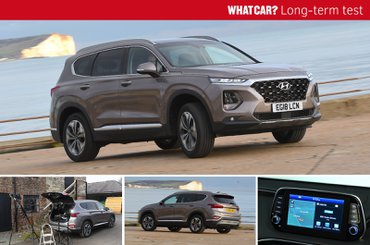