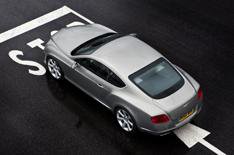 Bentley Continental GT
What is it? Updated version of the footballers favourite coup
Price from 135,760
On sale Jan 2011

Bentley's Continental GT is the car that kick-started its renaissance under VW ownership and now its due an overhaul of its own.

The new model is based on the old one and its dimensions other than a little extra width have hardly changed. Thanks partly to more advanced production techniques, the exterior has a sleeker look, with sculpted panels and a sportier front end. The rear end now shows the influence of Bentleys new flagship saloon, the Mulsanne, with a distinctive square-edged boot panel.

Inside, theres a swoopier dash and redesigned front seats that free up extra legroom for those in the back. Updated controls and a new touch-screen satellite-navigation system ensure the cabin mixes old-school luxury with 21st century technology, while a more sophisticated audio system includes a 15GB hard drive.

Under the bonnet lies a modified version of the old cars 6.0-litre 12-cylinder engine. Power has been boosted to 567bhp, while the automatic gearbox has been updated to provide quicker shifts. Bentley has revealed that a 4.0-litre V8 engine with significantly lower CO2 emissions than the W12 that will be added late in 2011.

A 65kg reduction in overall weight should make the Continental GT more nimble and theres also an updated four-wheel drive system.
Audi R8 GT/V8 Spyder
What is it? Lightweight special and V8 drop-top version of brilliant R8
Price from 95,545
On sale January 2011

More Audi R8s can only be a good thing and, best of all, Audi is launching two new versions.

Only the very lucky ones will get their hands on the new R8 GT, though, because just 33 are coming to the UK from an overall production run of 333. The GT is based on the V10 coup, but a range of weight-saving measures make it 100kg lighter. Audi has also squeezed extra power from the engine its 552bhp helps it towards a 0-62mph time of just 3.6 seconds, while the top speed is a heady 199mph.

Exterior tweaks include a fixed rear spoiler, bespoke front and rear bumpers, unique wheels and carbonfibre sideblades. There are plenty of interior upgrades, too, as youd expect for your 141,000.

Rumours are rife that a new flagship Aston Martin DB9 will be launched within the next two years, although the company is especially coy about confirming this.
Reports suggest that Aston will opt to revamp the current car (pictured here) rather than build an all-new model.

That means restyled aluminium body panels will sit on the same platform, as will an overhauled, more luxurious interior. Overall, though, the wheelbase, width, height and front and rear overhangs are not expected to change significantly, although the car will be lighter.

The exterior styling is said to be a toned-down version of the limited edition Aston One-77s (bottom). In particular, it is expected to use the supercars wide, deep front grille.

Power will continue to come from a modified version of the current V12.
Lamborghini Murcilago
What is it? New high-tech flagship model
Estimated price from 230,000
On sale Late 2011

Lamborghini has hinted that some surprises are on the way as it strives to meet more stringent CO2 emissions targets. Lamborghinis with stop-start systems and even hybrid power are possible in the future, then, but for now the replacement for its flagship Murcilago looks like business as usual.

The new model is expected to be as aggressive as ever, with a wide, low body and angular styling. An updated V12 engine will provide power to all four wheels the output is expected to rise to 700bhp.
Aston Martin One-77
What is it? The ultimate Aston Martin, with a price to match
Estimated price 1.2 million
On sale Spring 2011

The figures surrounding Aston Martins outrageous One-77 make for incredible reading. How does a 1.2 million price tag grab you? Or the prospect of a 7.3-litre V12 with a monstrous 750bhp? Then theres a 0-60mph time of 3.5 seconds and a rumoured top speed of over 220mph. In fact, the only small number involved is the limited production run of 77 examples.

The One-77s styling is pretty outlandish, too air intakes are formed from dramatic slashes in the bodywork, while the bulging rear wheelarches and wide, low stance up the aggressiveness.

In brief
Aston Martin DBS
The DBS high-performance coup is expected to get a makeover during 2011. Aston may squeeze more power from the current cars 5.9-litre V12, and new bumpers and light lenses will give it the DBS a sleeker look.