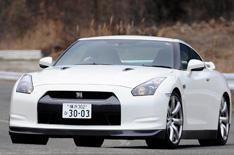 Nissan GT-R
Price from 52,900
On sale March
Whats great? Supercar power at a fraction of the usual price

After years of anticipation, Nissans awesome GT-R finally arrives in the UK next spring.

With a 3.8-litre V6 engine producing 473bhp, the hand-built GT-R accelerates from 0-60mph in an astonishing 3.5sec and on to 195mph its supercar performance, but at half-price.

Dont think its just about straight-line speed, either. Weve driven an unrestricted European-spec version, and found it to be one of the sharpest, most capable cars ever.

Best supporting evidence for this comes courtesy of Nissans test driver, Tochio Suzuki, who has taken a standard production GT-R around Germanys 13-mile Nrburgring circuit in just 7min 29sec the fastest time for a production car ever posted.

Indeed, our only major concern at present is that the ride is relentlessly stiff, which might not make the GT-R the most comfortable of companions over typically lumpen UK roads.

With four seats and boot space, the GT-R is also unusually practical for such a focused high-performance machine.

First deliveries start next March, but with the allocation for all of Europe in 2009 standing at just 1400 cars, youll either have to join the queue or pay well over the odds to get your hands on one.

Fiat 500 Abarth
Price from 13,500 (est)
On sale January
Whats great? Not the quickest hot hatch, but certainly one of the most in demand

If you thought that Fiats 500 was just a cute, retro city car, the new Abarth version might change your mind. With its chunky bodykit, fat alloy wheels and striking decals, it looks every inch the snarling hot hatch.

It doesnt just talk the talk, either; thanks to a 135bhp turbocharged 1.4-litre engine in a small, light body, the Abarth should hit 60mph in under eight seconds. Uprated steering and suspension promise handling to match, but when youre not in the mood, pressing a switch drops peak pulling power from 152 to 132lb ft for smoother progress.

If the standard Abarth isnt hot enough for you, the Esseesse, with its anticipated 160bhp, chassis tweaks and even more aggressive bodykit, should fit the bill.

The ultimate version of Audis R8 is coming and its going to be plenty quick enough to trouble pricier supercars such as Porsches 911 GT2 and Lamborghinis Gallardo LP560-4.

If raw power isnt your thing, theres also a Spider variant coming, which is expected to feature a folding fabric roof rather than a lift-out panel. This means Audi will have to strengthen the cars body, which will add weight and blunt performance albeit only slightly. Worry not, there will still be plenty of scope for high-speed wind in your hair.

If Lotus can match the balanced mid-engined brilliance of the Elise with the Evora 2+2, it will have built a car that can make four people very happy all at once.

Actually, back-seat passengers will have to be children or compact adults, because the Evora isnt designed for the larger-framed.

A Toyota 3.5-litre V6 petrol provides the power, producing only 270bhp. However, the Evora weighs no more than a Ford Fiesta, so it will be able to reach 170mph and travel from 0-60mph in a tad under five seconds.

The cabin has all the creature comforts of a luxury cruiser, including touch-screen sat-nav, Bluetooth and iPod connections and air-conditioning. There are also figure-hugging adjustable sports seats and a flat-bottomed steering wheel. Only 2000 cars will be produced a year, so get your order in quickly.

Audi TT Clubsport
Price (est) 40,000
On sale Summer
Whats great? The bad boy of the TT family
No roof, 300bhp and uprated suspension and brakes one for the hardcore enthusiast.

Jaguar XFR and XKR
Price (est) 65,000
On sale Spring
Whats great? Hot versions of Jag greats
Outputs of more than 500bhp are expected from this duo details follow next January.

Lamborghini Gallardo LP560-4 Spyder
Price (est) 157,000
On sale Spring
Whats great? Its a convertible Gallardo!
Whip down the roof and get ready to rumble with your 560bhp.