We love the Ateca, but can this range-topper really justify its £30,000 price tag?

The Tiguan may have less power but it hits back with a plusher, more practical interior

Spend a few minutes flicking through the latest reality TV shows or soap operas and it’s clear that folk do love a family feud. With this in mind, we’ve arranged our own, pitting two small SUVs from the Volkswagen Group in a head-to-head battle. In the silver corner is the Seat Ateca. It’s our reigning Small SUV of the Year in 1.4-litre petrol form, but here we have the priciest version available: the powerful 2.0 TDI 190 Xcellence, which gets four-wheel drive and an automatic gearbox as standard.

That’s because in the red corner is the Volkswagen Tiguan, which shares many of the Ateca’s oily bits but, unsurprisingly, has a loftier asking price. However, despite charging £1200 more than Seat, Volkswagen still only gives you mid-range SE Nav trim and a less powerful 2.0 TDI 150 engine.

So, is this average Tiguan really a better option than the ‘all bells and whistles’ Ateca? 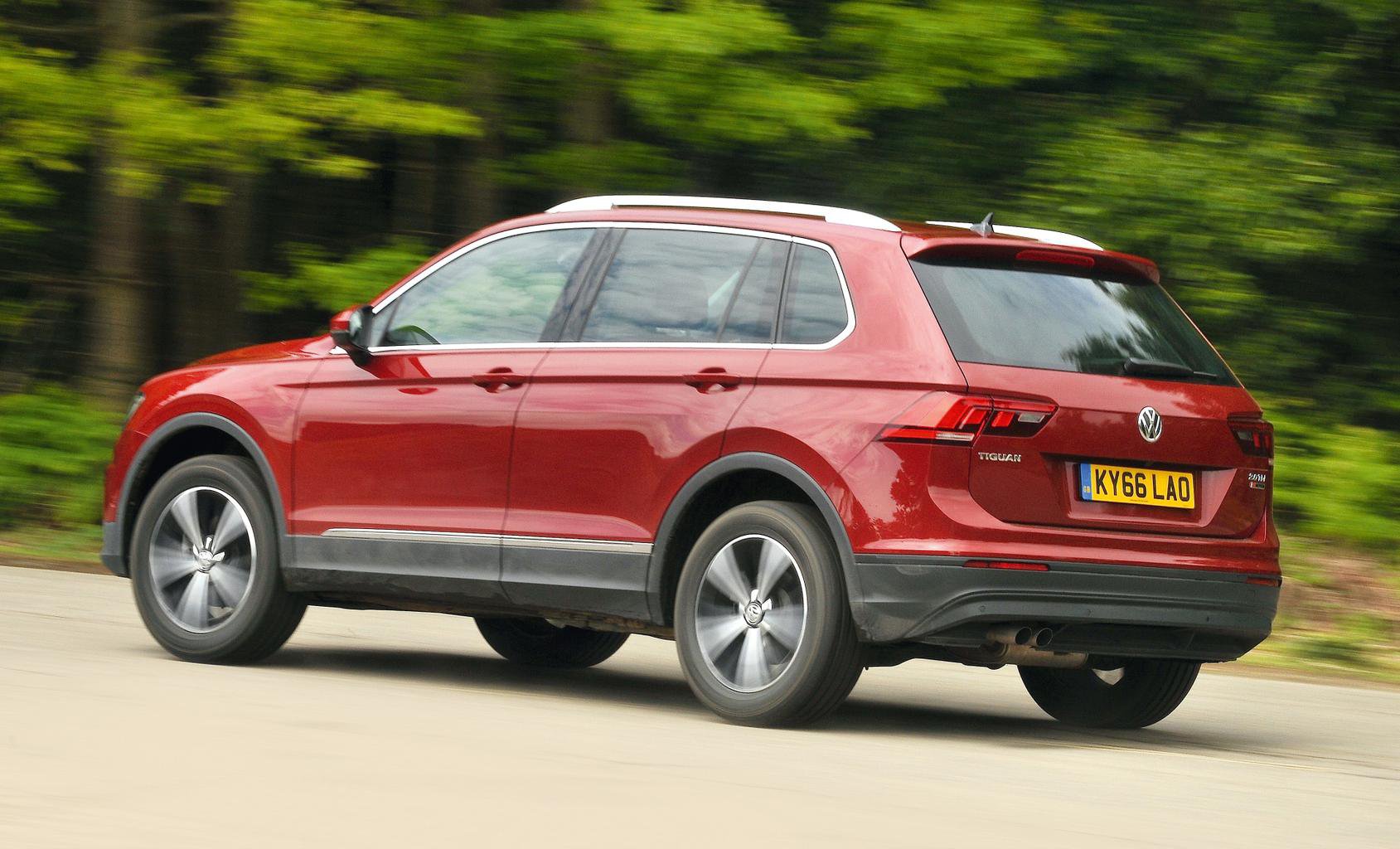 Both cars’ engines are well insulated. Sure, there’s a little diesel clatter at idle and they’re clearly audible when worked hard, but neither is intrusive in city driving or at a steady cruise. However, the Ateca’s bigger tyres create more road roar and you hear more wind noise, too.

The Tiguan also wins on comfort, dealing better with rough surfaces, especially with our test car’s optional adaptive dampers (£810) in their softest setting. The Ateca isn’t too uncomfortable, but you always feel more of the road’s surface. Our test car’s optional 19in alloys didn’t help, causing the car to bob up and down continually along crumbling urban streets, while potholes send a jolt through your backside. We’d recommend sticking with the standard 18in alloys, but even then the Ateca is stiffer than most of its rivals.

Accept the Ateca’s fi rm ride and – by small SUV standards, at least – you’ll be rewarded with remarkably tight, enjoyable handling. Chuck it through a series of bends and you’ll be amazed by how upright it stays and how well it grips the road. The Tiguan still handles very tidily, but it sways about more and its front tyres relinquish their grip earlier. 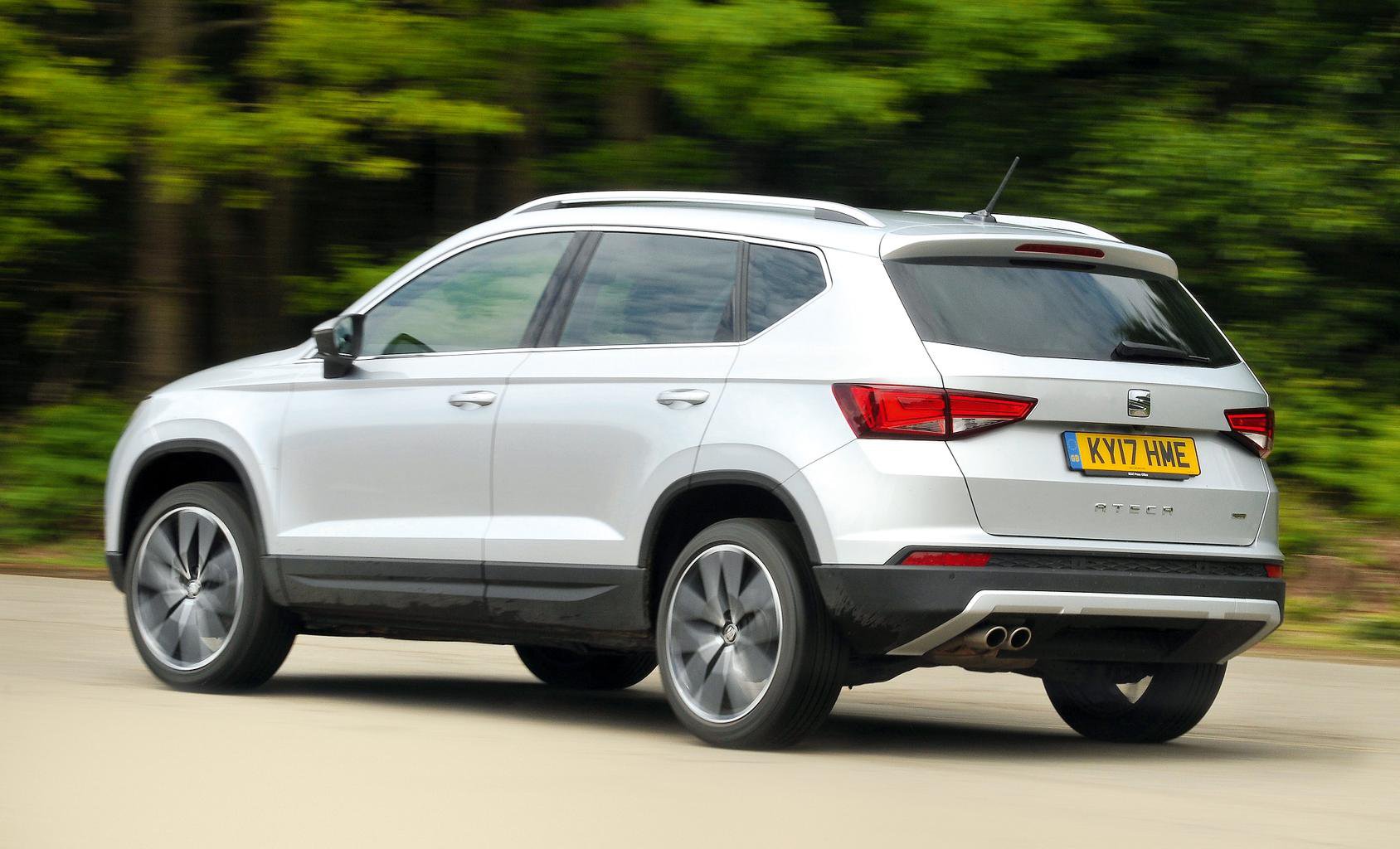 The Ateca has more naturally weighted steering and also gives you more feedback, making it the easier car to guide along a winding country road. That said, our test Tiguan was fitted with optional Progressive Steering (£195), which applies lock at a faster rate the more you turn the steering wheel. This reduces arm-twirling at low speeds, making it easier to wind your way up multi-storey car parks, but it feels a bit artificial at higher speeds.

What of performance? Well, the Ateca not only has a 39bhp power advantage but is also quite a bit lighter. This helps it to accelerate more briskly, so you can pull off overtakes with greater confidence and get up to speed on motorway slip roads far more easily. With noticeably more mid-revs vigour, it’ll pull you up steep slopes more ably and deal more easily with a full complement of passengers and luggage. The Tiguan is no slowcoach, but its engine always needs working harder.

Both cars are surprisingly capable off road, easily climbing steep, muddy inclines on their standard tyres. Of course, they don’t have Range Rover-like ground clearance, but you’re unlikely to get stuck at any holiday campsite.