With its all-new Skoda Scala, the Czech brand is going head to head with some of the UK's most popular cars. Does it have what it takes to win over the youngest member of our team?...

Why it’s here: To provide a credible budget alternative to the Golf as the Volkswagen moves upmarket for its next generation

Needs to: Show that a budget family hatchback doesn’t have to feel its price

Skoda came to take back my Scala recently in order to fix its infotainment system. An update had been required (as mine was a very early example), because the software repeatedly crashed.

This seemed to be the solution at first, but the touchscreen is back up to its old tricks again; although it does now function properly, it sometimes doesn't turn on at all when I start the car. I can still hear the radio and control the system to a limited extent with the steering wheel-mounted buttons, but the screen remains as dead as a dodo.

On a positive note, I recently visited a friend for the weekend, and we went mountain biking (or hill biking, I suppose, as it was in Oxford). I had been a little worried that our bikes – each with a pair of 29in wheels – wouldn't fit in the Scala's 467-litre boot. But no worries: with the 60/40-split rear seats pushed down (easy to do, using little levers on their tops), the load bay extends to 1410 litres. That's just about enough for two bikes with their front wheels laid on top, plus all the other associated stuff, even with a 6ft-tall passenger comfortably in the front seat. 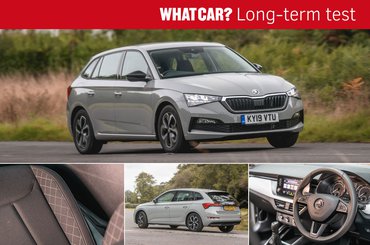 With its all-new Skoda Scala, the Czech brand is going head to head with some of the UK's most popular cars. Does it have what it takes to win over the youngest member of our team?