The Seat Ateca's entry-level 108bhp 1.0-litre petrol engine (badged 1.0 TSI 110) delivers adequate performance without you having to rev the engine hard; it’s ideal if you spend most of your time in town, but once you’re on the motorway, keeping up with faster traffic requires liberal use of your right foot.

It’s the mid-range 148bhp 1.5-litre turbo petrol engine (badged as the 1.5 TSI EVO 150) that we think makes the most sense for buyers; indeed, Seat expects this to be the most popular choice. This builds power smoothly and progressively and allows you to make swift progress over any type of road. It’s the low-down grunt that really impresses, though, so it should be ideal if you plan on loading the Ateca full of people and luggage (more on that later). If you want even more power, the 2.0-litre TSI 190 petrol can crack 0-62mph in just 7.1sec, but it’s very expensive. There's also the performance-focused 300bhp Cupra Ateca, which we've reviewed separately.

If you cover a lot of miles and are therefore interested in diesel power, there’s a couple of choices; the entry-level 2.0 TDI 115 is pretty weedy, though, so we’d go for the extra power in the 2.0 TDI 150 if you can. Overall, the Ateca’s engines are as brisk and as capable as you’d hope compared with rivals in this class. There aren’t any plug-in hybrid versions available, though.

Family SUVs have a tough brief: despite their raised stance, they're expected to corner without leaning too much while still offering decent ride comfort. Fortunately, the Ateca strikes a reasonable balance.

True, it's firmer than some rivals, including the Nissan Qashqai and Skoda Karoq, so it can feel a bit fidgety at low speeds. However, because its body stays well controlled over larger disturbances, such as sleeping policemen, the Ateca doesn’t continue to bounce and jostle you about long after the bump has been and gone. The only time you feel a jolt is over sharp-edged ridges and potholes.

As is often the case, you’ll find that smaller-wheeled models ride more smoothly than those with large 19in wheels, those being the FR Sport and Xperience Lux trims. And it's worth noting that the lighter petrol models are generally more forgiving than the heavier 2.0-litre diesel. 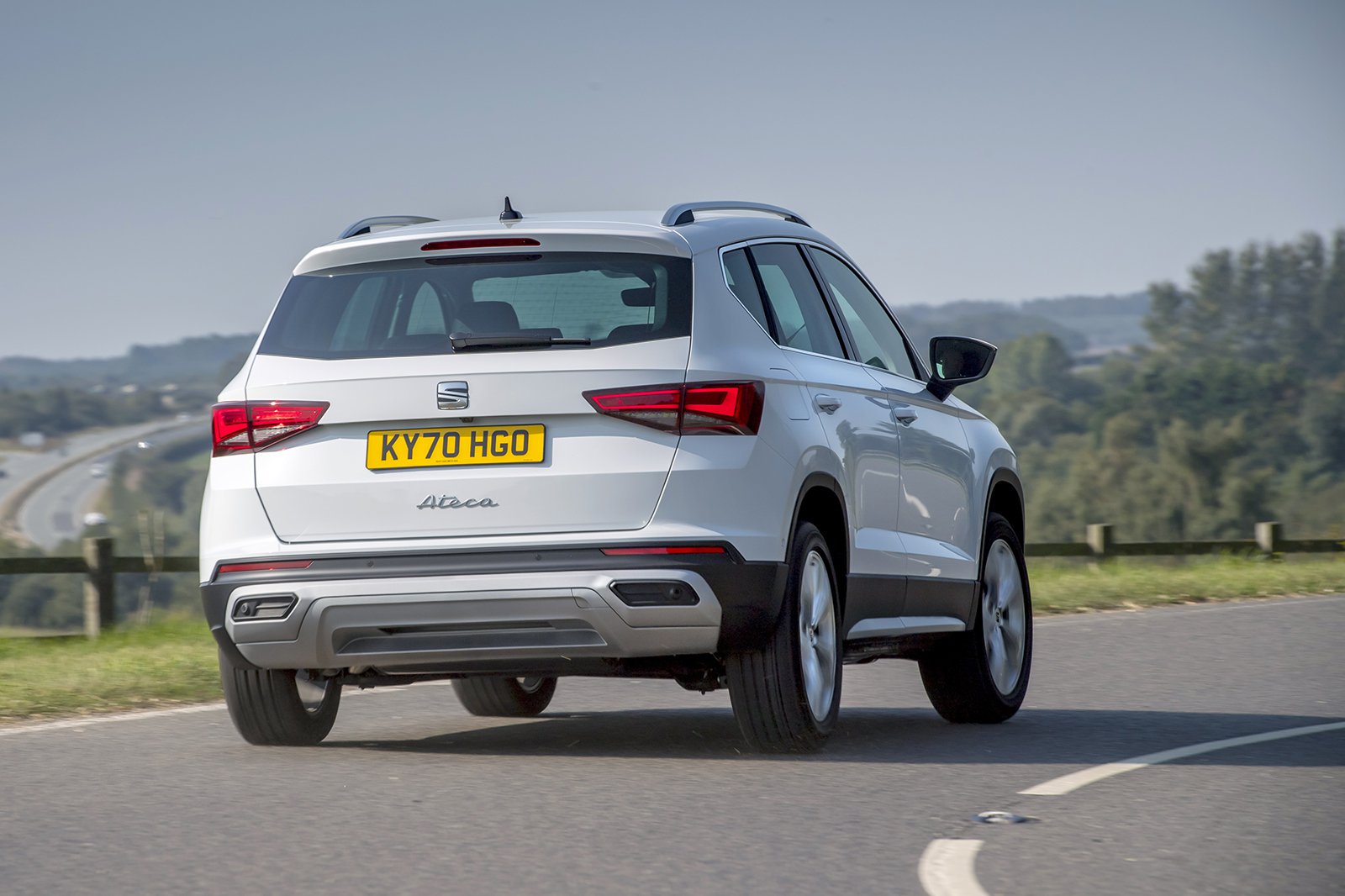 Let’s not get carried away; tall SUVs never handle as well as equivalent hatchbacks, so this car’s never going to be the handling champion that the smaller Seat Leon is – but the Ateca does prove surprisingly good fun to drive down your favourite stretch of road. It’s certainly well ahead of direct rivals, including the Qashqai and the Karoq, even though the latter shares a lot of mechanical components with the Ateca.

The suspension is firm enough to ensure that you don’t get too much body lean when cornering, helping to make the Ateca feel agile. Meanwhile, the steering is precise and offers decent feedback, making it easy to place the nose of the Ateca just where you want it. It’s well-weighted, too, especially if you put it into sport mode using the standard drive profile selector.

There’s plenty of grip, too. Put simply, if you like driving and want to buy a family SUV in this price bracket, the Ateca should be at the top of your list. The direct rival that comes closest is the Toyota C-HR, but that's available only with a weedy hybrid engine.

The Ateca is impressively quiet if you choose a petrol engine. The 1.5-litre petrol might as well be in a different postcode to the rest of the car, because unless you’re thrashing it, you won’t know it’s there. And while the smaller 1.0-litre petrol isn’t quite so distant, its chirpy tone is never uncouth and it quickly settles down to a background thrum.

The 2.0-litre diesel is less impressive, sounding a bit gruff at tickover and getting a bit boomy above 3000rpm. There’s enough poke that you’re unlikely to venture that high up the rev range too often, though, and you feel less vibration through the controls than in an equivalent Qashqai or Kia Sportage.

Gearbox options include a six-speed manual or seven-speed automatic. The manual is a delight to use, with a smooth action to get into each gear, while the automatic option does a good job most of the time. Just be aware that it can be a little jerky when initially pulling away. Whichever engine you choose, road and wind noise are well contained, despite the Ateca’s upright stance