You sit lower in the Leon than you do in a Ford Focus; that’s neither good nor bad unless you have a particular preference for how high you like to be from the road.

But regardless of matters of personal preference, the Leon’s driving position is fundamentally great, thanks to pedals that line up neatly with the seat and steering wheel, and a driver’s seat that’s comfy on long journeys and supportive through corners. The fact that all trims come with adjustable lumbar support certainly helps

Our only complaint is that the Leon doesn’t have proper buttons and switches on its dashboard, it uses touch-sensitive pads instead. You can’t find these by feel, so you have to look away from the road to check you’re not just pressing a random bit of the dashboard. That’s distracting at 30mph, let alone 70mph, and even then the pads don’t always register inputs.

The Leon has reasonably thin windscreen pillars, so forward visibility is fine – but chunky rear pillars make seeing what’s behind you when reversing trickier than it is in some rivals.

At least what you can’t see will be announced audibly – hopefully not by a loud crunching noise but by rear parking sensors. Go for SE Dynamic trim or above and you’ll get sensors at the front of the car as well, although it’s a pity that the only way to get a rear-view camera is by forking out for range-topping, limited edition FR First Edition trim.

Powerful LED headlights come as standard on all versions of the Leon, but go for FR trim and the lights gain the ability to dip themselves automatically to avoid dazzling oncoming drivers at night. 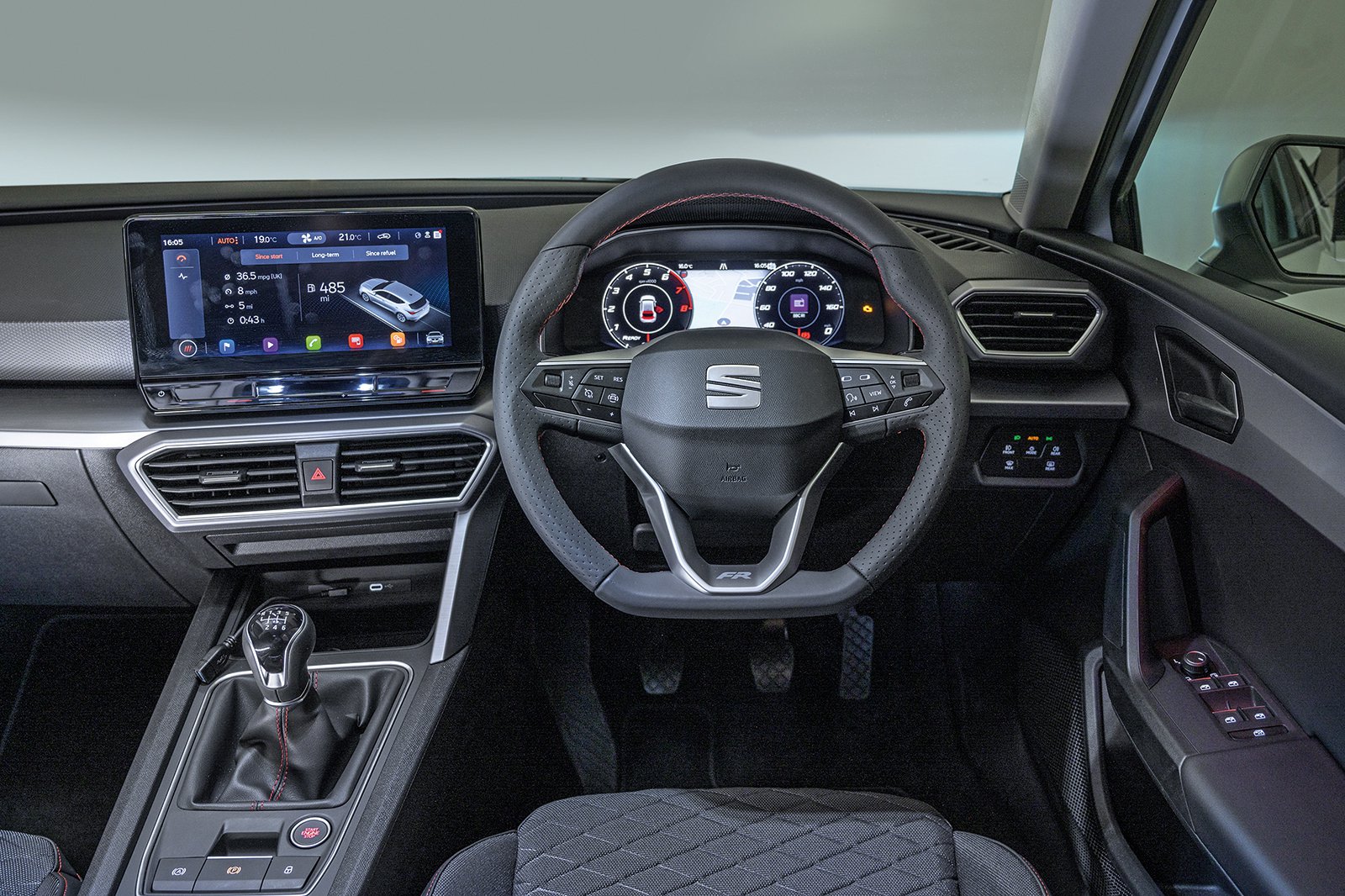 Go for entry-level SE trim and you’ll get an 8.3in touchscreen, a DAB radio, Apple CarPlay and Android Auto smartphone mirroring, a seven-speaker sound system and two USB-C ports. All of the higher trim levels come with an enlarged 10in touchscreen, and add built-in sat-nav and natural voice recognition. FR models bring a couple of extra USB-C ports, too.

The larger screen (we haven’t tried the smaller one yet) is bright and clear and the operating system it runs is far more intuitive than the rival Volkswagen Golf’s. The fact it’s a touchscreen inevitably means that, when you use it, some of your attention is diverted away from the road, but at least this is kept to a minimum.

The natural voice control function works really well, too. You wake it up by saying “Hola, Hola”, and then talk to it like you would another human being. Say “I’m hot” and it’ll turn up the air-con and, while it isn’t infallible, we found it works well with a variety of accents.

The Leon certainly has a plusher interior than the Focus. You’ll find squidgy, dense-feeling plastic on the top of the dashboard and above the armrests on the doors, plus the buttons on the steering wheel are nicely weighted and don’t feel at all cheap.

It doesn’t look or feel as posh inside as a BMW 1 Series, but then you probably wouldn’t expect it to. It’s a closer-run thing with the Golf, but the Volkswagen just edges it; the Leon’s slightly low-rent door pulls are the main reason.