It’s unlikely that anyone will get into the Skoda Karoq and start grumbling about a lack of space in the front. It’s possible to slide the driver’s seat back by a good amount to accommodate long legs, while those tall in the body will find the seat drops low enough to give plenty of head room.

The only caveat, and it’s a slight one, is that the panoramic sunroof (standard on Sportline and Edition models, and optional on lesser trims) nabs a bit of roof height.

There are lots a of storage spaces on board, including big door bins and cubbies around the central dashboard area.

The Skoda Karoq is a family-focused SUV, so its rear door openings are nice and large, which makes fitting a child seat relatively painless. And for adults there’s plenty of leg room, so even six-footers won’t find their knees pressed up against the front seatbacks.

Head room is excellent, too. The Karoq's roof is higher than the Nissan Qashqai’s, although the Seat Ateca and Volkswagen Tiguan offer a tad more room for particularly tall people. As in the front, the optional panoramic roof does reduce head room, though, which is something worth bearing in mind if you plan to put tall people in the back.

What about carrying three in the back? Well, there’s a high central floor hump to clamber over and, once in place, the middle passenger will feel a little squished. We wouldn’t recommend a long trip with three adults sitting in the back, but there shouldn't be too many grumbles on short journeys. 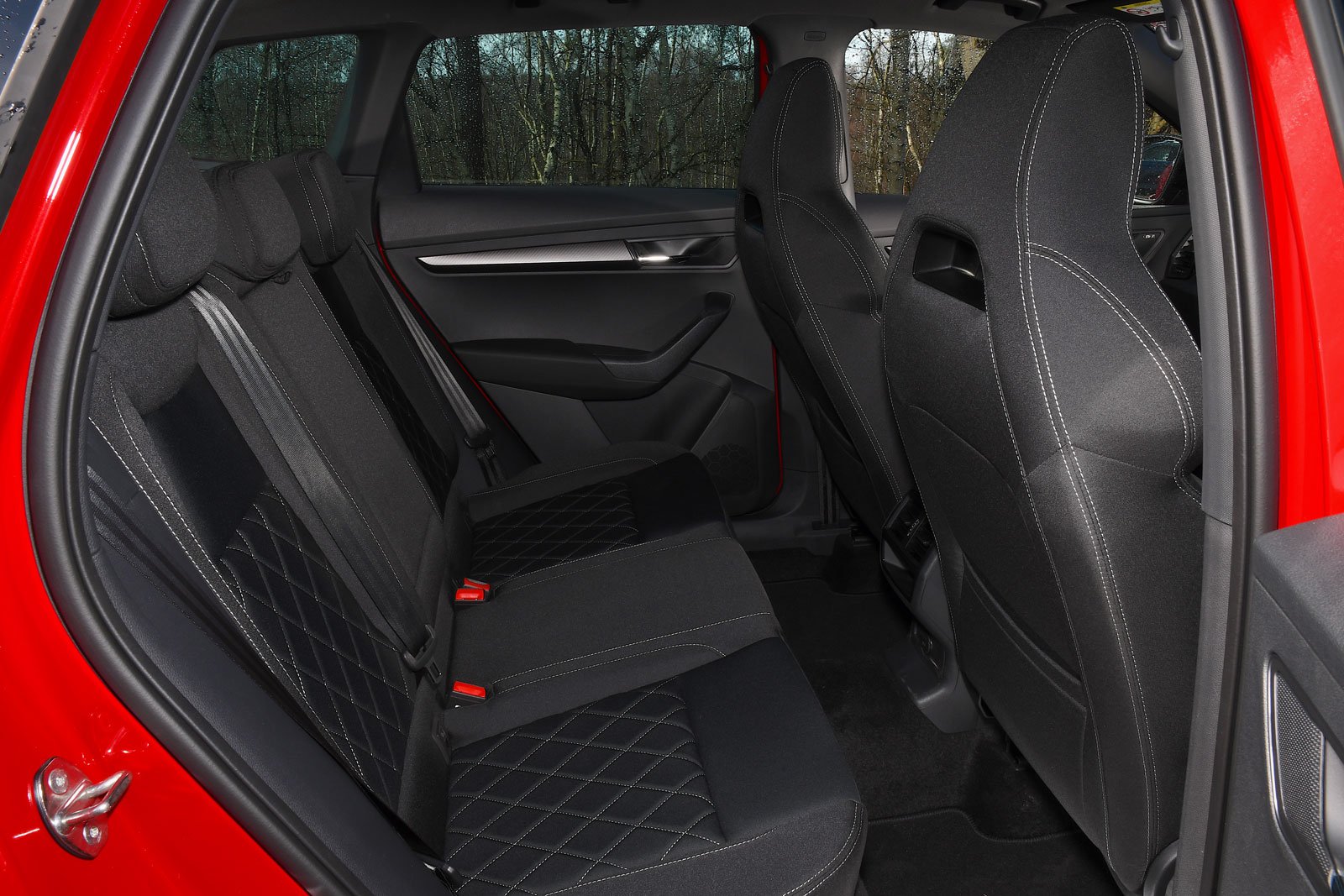 This is an area where the Skoda Karoq wipes the floor with its rivals, even closely related ones such as the Seat Ateca.

The VarioFlex seats fitted as standard to SE L trim and Edition (and as options on all other versions apart from Sportline) do all sorts of clever things. For a start, they’re split fairly evenly into three separate seats rather than 60/40 – this offers much more flexibility when carrying long loads as well as rear passengers.

But that’s not all – they also recline, and slide back and forth independently. You can even remove all three rear seats from the car, freeing up even more space. The only trouble is that they're rather bulky and heavy. Without VarioFlex seats, the rear seats are split 60/40 and don’t slide or recline.

The Skoda Karoq’s boot is one of the biggest in the Family SUV class. Even the Seat Ateca, which shares many of the Karoq's nuts and bolts, can’t carry quite as much, as we found out when we tried loading carry-on suitcases – the Ateca managed to swallow eight, while the Karoq opened wide and gulped down nine. Those also fitted comfortably beneath the tonneau cover without sliding any VarioFlex rear seats forward to increase boot space further. Remove the rear seats entirely and the Karoq is essentially a small van.

The only mild annoyance is that if you opt for VarioFlex rear seats, you can't have a height-adjustable boot floor. Having one would lessen the loading lip and create a flat, extended load bay when the rear seats are folded down. You can add a height-adjustable boot floor to SE, SE Drive, SE Technology and Sportline models for a small cost, though.

On all versions, you get a range of hooks, trays and other clever features that should stop your shopping from sloshing around the boot when you’re driving home.