Thanks to a driver’s seat that’s easy to adjust vertically and back and forth, with a steering wheel that does the same, you’ll have few issues getting comfy behind the wheel. However, the range of steering wheel adjustment isn't as extensive as it is in the Focus Estate, and adjusting the angle of the backrest involves pulling a lever and shifting your weight back and forth until you find the right position. A lot of rivals – the Focus Estate included – offer a simpler and more convenient dial to twist.

Every Corolla Touring Sports trim level comes with electric adjustable lumbar support as standard, and this helps make it a great choice for covering long distances, even if the seat itself doesn’t offer quite as much side support as you’ll find in the Focus and Octavia Estate. If you’re hoping for a loftier driving position from the Trek, forget it; it perches you just 20mm higher than the regular Touring Sports.

You won’t complain about your view of the road ahead or out of the side windows at junctions. Relatively chunky rear pillars mean over-the-shoulder visibility isn’t as good as you’ll find in an Octavia Estate, but this doesn’t present too much of a problem as every Corolla Touring Sports comes with a rear-view camera. There are also front and rear parking sensors on all but entry-level Icon models.

Powerful LED headlights are fitted as standard across the range and are a boon at night. In most rivals, you’ll either need to pay extra or upgrade to a posh trim level for comparable technology. 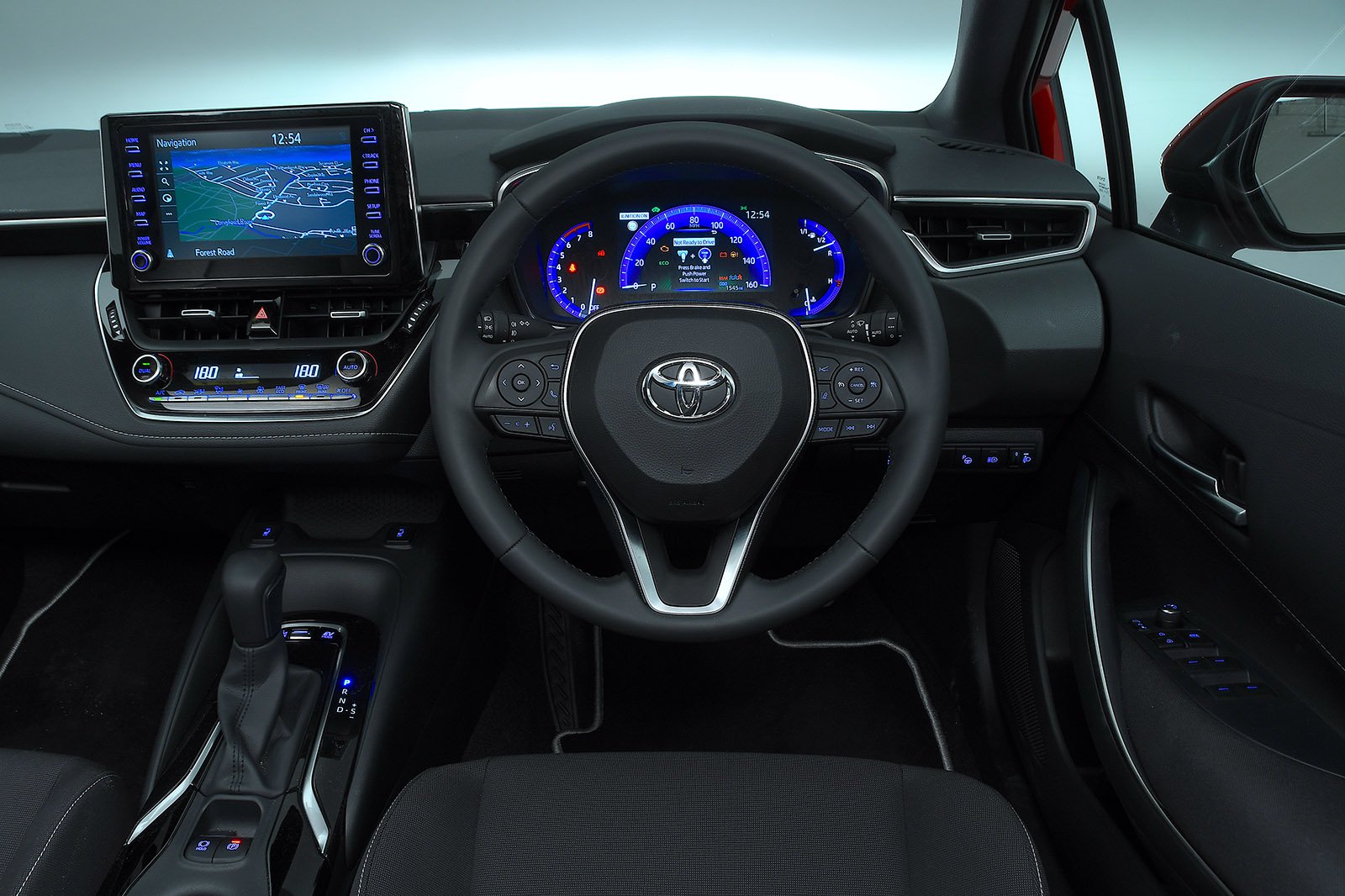 Let’s start with the positives. The 8.0in touchscreen is positioned high up on the dashboard making it easy to see on the move. There are also numerous physical shortcut buttons surrounding the screen, which are far easier to hit than the touch sensitive buttons used by numerous rivals including the Octavia Estate.

Of course, you can choose to operate the system by using the screen, but if you do you’ll find it’s quite slow to respond to inputs. What's more, the screen resolution isn't very impressive, the menus are not particularly intuitive and the graphics for the map (sat-nav is standard from Icon Tech trim) look rather congested.

Thankfully, every Corolla comes with Apple CarPlay and Android Auto smartphone mirroring, so you can simply choose to bypass Toyota's own software. Every model also comes with DAB radio, Bluetooth and a USB socket, and the standard six-speaker stereo is clear and punchy. That's just as well because the JBL premium upgrade is only available with top-spec Excel trim and with the 2.0-litre hybrid engine.

The Corolla Touring Sports’ interior is solidly made, with plenty of soft-touch materials that lend it a competitively plush feel. The dashboard materials, for example, feel pleasantly squidgy and dense and even the insides of the doors don’t feel too cheap or scratchy. In fact, compared with the Focus Estate, the Corolla feels positively upmarket.

Some of the details aren’t quite as classy as its rivals, though. The leather on the steering wheel and gearlever, for example, feels a little plasticky compared with the fine-grain stuff you’ll find in a well-specced Octavia Estate.