We weren’t joking in our intro. The entry-level Audi e-tron GT really is extremely fast.

It has two electric motors, one driving the front wheels and one for the rears, making it four-wheel drive. That means it gets off the line with no drama in terms of wheelspin but an all-encompassing drama in terms of the force with which it mashes you back in the seat.

Normally, the total power is 470bhp, but for a quick 2.5sec burst it can beef that up to 523bhp, which equates to 0-62mph in 4.1sec. That’s quite a bit faster than the entry-level Porsche Taycan and fast enough to make it our pick of the range.

The RS model ups the ante with a consistent 590bhp or, when that’s not quite enough, a 2.5sec burst of 637bhp. That fires you off like a mortar from rest to 62mph in 3.3sec. It's right up there, give or take, with the fastest-accelerating Taycan Turbo S (2.8sec) and the Tesla Model S Long Range. If you must have more haste, Tesla claims the Model S Plaid will do 0-60mph in 1.9sec.

If that seems unnecessary (which let’s face it, it is for a five-seat road car that isn’t eligible for a Formula 1 race), the Model S’s battery range is a return to sensible one-upmanship. The Long Range will officially manage up to 412 miles on a charge, while the e-tron GT will do 295 miles (and the RS 280 miles).

We haven’t been able to qualify the e-tron GT’s real-world battery range yet, but it uses the same 93kWh battery as the Taycan (86kWh is its usable capacity). So it’s reasonable to assume that the RS e-tron GT should at least match the Taycan Turbo, which we’ve ascertained can do 200-odd miles easily enough.

Right, let’s move on from the bold statistics to the nuances of handling. Here, the e-tron GT and Taycan feel like two peas from the same pod, while the Model S is a potato. The Taycan is tuned for ultimate agility, while the e-tron GT is purposely slightly softer (Audi says it’s further towards the ethos of a grand tourer), but it’s still a great-handling electric car. The second best on sale, in fact.

Take its steering. Yes, it’s lighter in feel than the Taycan’s, but it’s direct and accurate so you can place the car on the road perfectly and feel some sense of the surface tingling your fingers as you do. We’ve only driven e-tron GTs fitted with four-wheel steering (an option on the GT and standard on the RS), which will have an impact. We’ll let you know what the standard set-up is like when we’ve tried it.

We’ve also only sampled the adaptive air suspension that’s standard on the RS (the e-tron GT gets adaptive suspension as standard but the air springs are an option) and there’s very little body lean for such a heavy car. The e-tron GT’s balance of grip is biased slightly towards the rear, so if you back off the accelerator you can use the pivoting rear end to tuck the nose into the corner then put the power down and feel the rear squatting and driving you out of the other side.

It’s thrilling if you thrive on the intricacies of a car’s handling dynamics, and way more fun than the Tesla Model S, or even the Model 3, for that matter. But, if you’re thinking “all that sounds a bit too much; I just want to make it round a corner in one piece” then it’ll do that too. When you’re not pushing its ultimate limits, the e-tron GT and RS are grippy, surefooted and a doddle to drive.

They’re also very comfortable. The air suspension does a fantastic job of controlling the heavy body’s vertical movements, while still absorbing the punch of a pothole or the thwack of a sleeping policeman. The Model S is softer, but that doesn’t actually make it more comfortable, just less settled at times.

The regenerative brakes of a lot of electric cars are a bit of a pain. They replenish the battery with energy as you slow down, but that means integrating a normal braking system – for full-on stops – with the motors’ retardation during gentler braking. Getting this symbiosis wrong makes the brakes hard to judge and disjointed, but the e-tron GT’s are pretty good.

They’re not quite as linear as the best brakes on regular (that is, non-electric) performance cars, but you can learn to meter them progressively enough.

One thing to note: you cannot drive the e-tron GT with one pedal, as you can with the Model S, because the regenerative effect isn’t powerful enough to stop the car by lifting off the accelerator alone. Also, the optional carbon-ceramic brakes that are available with the RS have a disappointing dead patch at the top of the pedal's travel. The standard brakes aren’t blighted by that.

Like the Taycan, there’s a fair amount of motor and gearbox whine in the e-tron GT, mainly heard below 30mph, and the gearbox (there’s a two-speed automatic ’box driving the rear wheels) can shunt at times. Road and wind noise are noticeable but far from antagonising; the e-tron GT gets an acoustically glazed windscreen and the Vorsprung trim adds acoustic glazing to the side windows as well.

Of course, this is an electric car, so there’s no engine noise. To compensate, you can add a sound generator to the GT (standard on the RS) that vaguely mimics a petrol engine. The Taycan has something similar but it sounds like the USS Enterprise accelerating to warp speed. 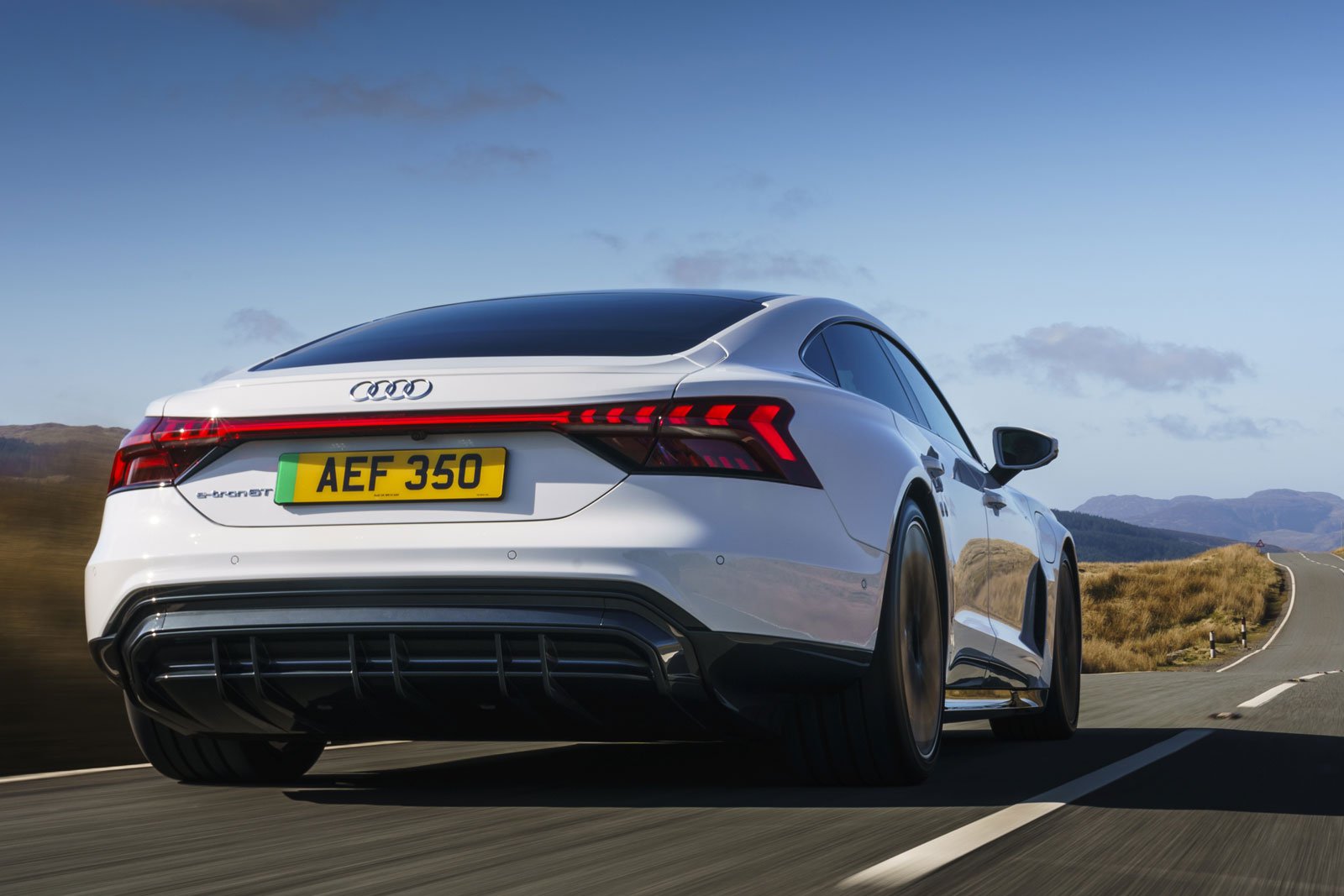