The fastest Range Rover Velar in the range is the P400e plug-in hybrid. With a 0-60mph time of just 5.1sec, it’s properly punchy with both electric and petrol power working together. Performance is rather more sedate in electric mode, although it’ll get you up to motorway speeds if you’re patient enough, and run for up to 33 miles on a single charge. The engine can take a moment or two to wake up if you put your foot down while running on volts alone.

If you want effortless performance without having to worry about charging up, we’d recommend the 296bhp 3.0-litre six-cylinder diesel (D300). It isn't as fast as the P400e, but it pulls hard from low revs and can still officially manage 0-60mph in a hot hatch-rivalling 6.1sec. A cheaper D200 four-cylinder diesel is also available, but we’re yet to try it.

There are also a couple of purely petrol alternatives, the four-cylinder P250 needs working harder than the diesels but has a reasonable turn of pace. We’re yet to try the six-cylinder P400. If you’re interested in towing ability, the D200 and P250 can tug 2400kg with the D300 and P400 upping this to 2500kg. Even the P400e can manage a reasonable 2000kg.

The Range Rover Velar's standard non-adaptive suspension is softly sprung and proves more supple than a BMW X4 or Porsche Macan on standard springs. As a result, the SUV deals with undulating roads in a gentle manner, but pockmarked surfaces and sharp bumps still cause it to fidget if you’ve picked the bigger, flashier 21in or 22in wheels.

If you want the cushiest ride, you should choose the optional air suspension. It’s standard on D300, P400 and models and optional on every other model bar P400e. It allows you to adapt the Velar to suit your mood or the terrain you’re facing. Left in Comfort mode, the ride is more cosseting overall and makes big wheels easier to bear. There’s a wafty high-speed ride that deals with crests and compressions in a gentle manner, but there’s enough body control to stop it bouncing or wallowing. 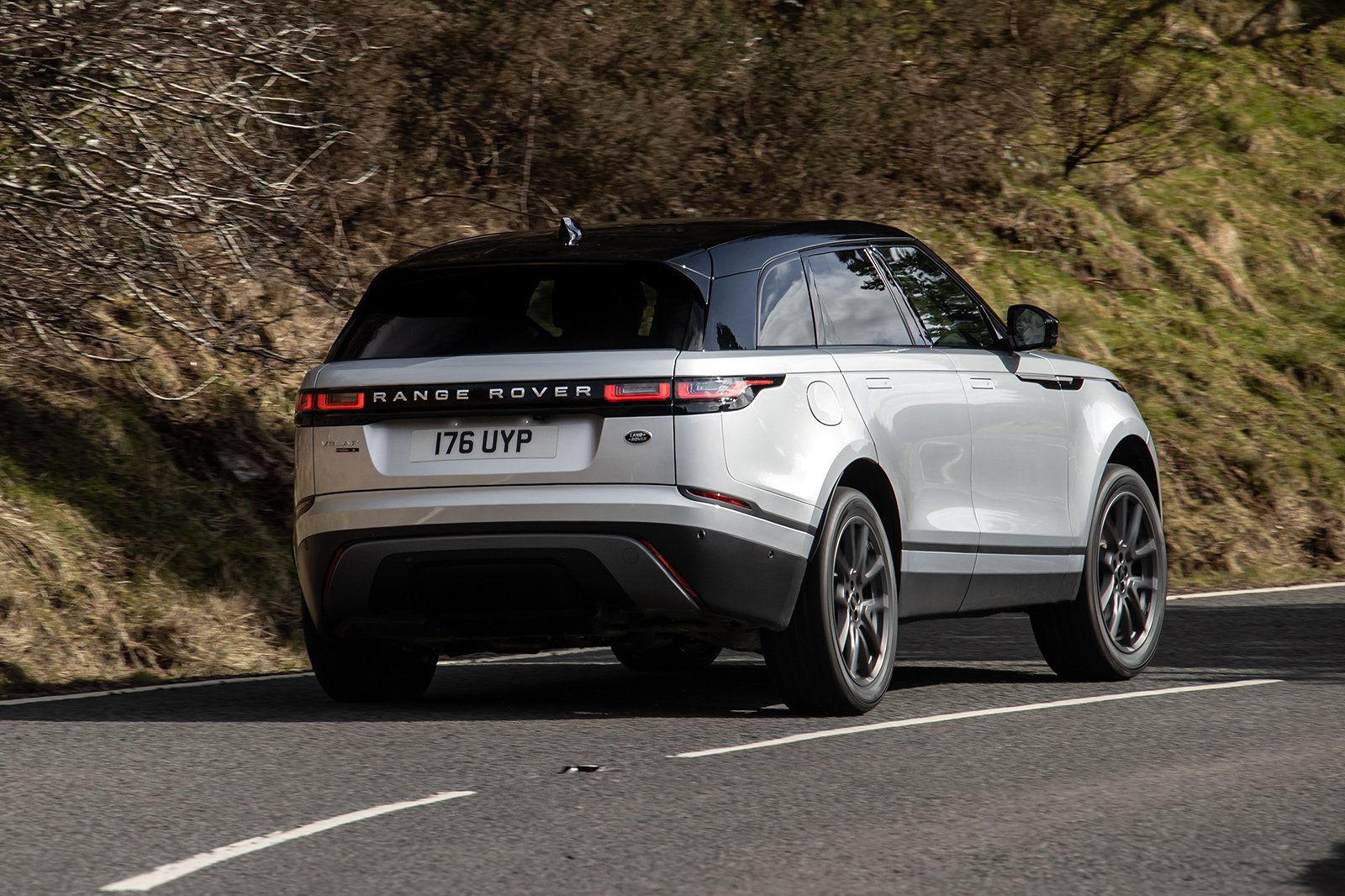 Range Rovers have never been known for pin-sharp handling or delicate levels of driver feedback, and the Velar doesn't change that. That’s not to say it handles badly. Around town, its light steering is effortless, yet it has enough precision on faster roads to let you place the car's nose where it was aimed.

Still, you cannot get away from the fact that the Velar feels heavier and less agile than many of its rivals. Whatever suspension set-up you go for, the Velar leans more than the BMW X4 and Porsche Macan, although if you switch air-sprung cars to their Dynamic mode, they do feel appreciably sharper.

Mind you, when you drive on craggier surfaces, the Velar is far more impressive than its nearest and dearest challengers. It’ll scramble up steep, rocky slopes with surprising ease, and its hill descent control helps you safely down the other side. In that respect it feels like a true Range Rover and is at its best when it’s fitted with air suspension, which is height adjustable so it delivers even more ground clearance.

The P400e’s four-cylinder petrol engine sounds more hot hatch than luxury SUV when worked hard in the Range Rover Velar, but it settles into the background most of the time, and switches between electric and petrol power smoothly. If you’re after something sweeter, go for the D300 diesel. It’s extremely hushed at low engine speeds, transmits next to no vibration through the controls, and, as the revs rise, growls pleasantly. Impressively it’s a bit more refined than the equivalent BMW diesel and challenges the Audi offering too.

An eight-speed automatic gearbox is standard on all models, but can be laggy when you want a burst of pace, although it’s nowhere near as dimwitted as those of certain key rivals, such as the more expensive Audi Q8. Switching the gearbox into Sports mode sharpens up its responses and makes it slightly snappier to react. If you really get frustrated, you can take control of gear changes yourself using the steering-wheel mounted paddles.

The Velar’s motorway manners are pretty good. Road noise is well contained at speed, but there is some wind flutter around its big door mirrors. It’s quieter overall on a long trip than a Porsche Macan.