Producing 178bhp, the 2.0-litre four-cylinder Skyactiv-X engine petrol engine is unique in combining the best aspects of petrol and diesel engine technology. It can behave like a sporty petrol engine when you need lots of acceleration, and then, at cruising speeds, uses diesel-style compression ignition to reduce fuel consumption, using a tiny supercharger that’s there to increase efficiency, rather than to add power.

But what does this all mean in the real world? Well, in most driving situations, the Skyactiv-X doesn’t feel any different to a regular petrol engine, delivering its power smoothly and pulling strongly to get you up to speed with ease. There’s a surprising amount of torque at low revs for a petrol engine; the peak is reached by 2500rpm so you don’t have to change gears too often, making for a relaxed driving experience.

Should the mood take you to up the pace, though, you’ll need to rev the engine rather hard to make the most of the engine’s 178bhp. By contrast, the Skoda Superb’s 148bhp turbocharged 1.5 TSI petrol engine feels altogether more perky in most driving situations, being just as keen to rev, yet feeling no less eager to pull from low revs. There’s a slight grittiness to the way the Skyactiv-X engine feels when worked, too, that’s slightly reminiscent of a diesel engine. It’s not intolerable, but the less powerful Skyactiv-G engine of the 3 hatch is quieter and smoother. On the other hand, wind and road noise containment is up there with the best in class only picking up slightly at motorway speeds.

The 3 Saloon’s suspension is set up quite firmly and it doesn’t smother rigid bumps around town nearly as well as the Mercedes A-Class Saloon. On the plus side, it’s well tied down, so you and your passengers won't be bouncing out of your seats on rolling country roads. There’s plenty of grip to encourage you to push through corners, while body roll is resisted well, keeping the car composed. Although the 3 hatchback is available with either front or four-wheel drive, the saloon is exclusively front-wheel drive. Its steering is pleasingly weighted and has sufficient heft to make it feel connected to the wheels, helping you turn in to corners precisely. However, at motorway speeds you’ll notice a bit of vagueness when trying to steer a straight course.

The 3 Saloon offers the choice of a manual or automatic gearbox. We’ve not tried the auto yet, but the manual is one of the best around, mimicking that of Mazda’s MX-5 sports car. It has a short and precise action that really slots into place with confidence, and is light enough that you can flick between gears with just one finger. The clutch pedal weight and biting point are perfectly judged, too, so fans of shifting gears, you’ll really enjoy driving the 3 Saloon. Its brakes are another strong point; there’s plenty of pedal feel and enough braking power to give you confidence, and they feel less grabby than those of the Skoda Superb. 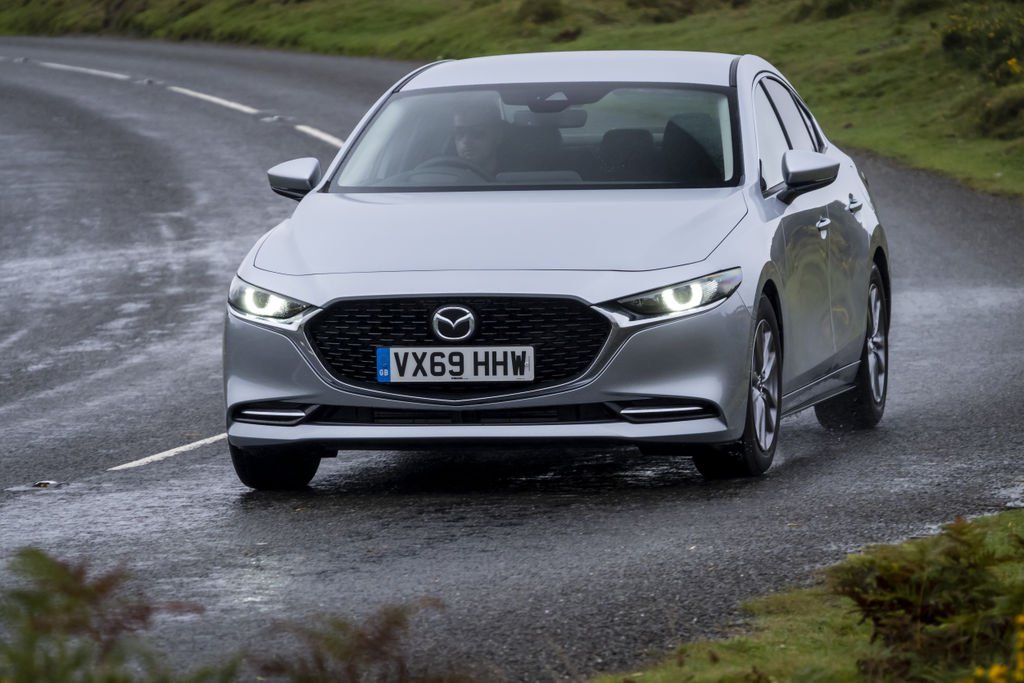