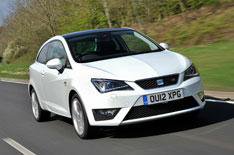 The Seat Ibiza supermini has been refreshed for 2012.

It gets a smarter, more grown-up look, thanks to cosmetic changes that include new bumpers, a smaller front grille, new headlights and foglights, plus a crease in the bonnet.

In the cabin, the Ibiza gets a restyled climate control unit and instrument dials, along with new steering wheel designs. Seat's new Portable Media System already in the Mii will be available in the Ibiza later on this year.

The engine range is unchanged, but the estate model is available with the sporty FR trim.

What's the 2012 Seat Ibiza like to drive?
The 2012 Ibiza has no mechanical or chassis tweaks over the previous car, so feels exactly the same to drive.

The 1.2 TSI engine is responsive and revvy, but not out-and-out rapid. The 1.4 TSI offers much more in the way of genuine pace, while the 1.6-litre diesel is strong and flexible, but rather clattery.

We also tested the 69bhp 1.2 petrol version. This is the more powerful of the two three-cylinder units there's a 59bhp 1.2 and it copes well on most roads. A little extra oomph would be welcome on faster roads, and it gets a bit clattery when pushed hard, but this quietens down at cruising speeds.

The suspension soaks up nearly all bumps without upsetting the car, and it handles corners perfectly. The light steering is a little short on feel, though.

What's the 2012 Seat Ibiza like inside?
The driver should be able to get comfortable, using four-way steering-wheel adjustment, and seat-height controls. Front visibility is fine, but over-the-shoulder vision is restricted by thick rear pillars.

The centre console looks dated, but it's easy to navigate. The plastics aren't as nice as those in a VW Polo, though.

There's room for three in the back just. The three-door Ibiza's rakish roofline makes headroom an issue, though, while rear leg- and kneeroom will be a problem for those over six feet tall. However, the 292-litre boot is on a par with those in many of the Ibiza's rivals.

The Seat is well equipped, too, with all trims getting electric front windows, remote central locking and MP3-connectivity as standard. Other options include Bluetooth and automatic lights and wipers.

Should I buy one?
One of the Ibiza's key selling points is the price: the 1.4 84 petrol model, for example, is around 1000 less than the equivalent Vauxhall Corsa. The Ibiza is also cheap to insure and run.

However, it's not as fun to drive as a Ford Fiesta. It's not quite as classy, either, but the Ibiza is still a fine, sharp-looking alternative to the usual supermini suspects.