The Porsche 911 GT2 RS is the most powerful and technologically advanced 911 to date, but is it the most rewarding to drive?... 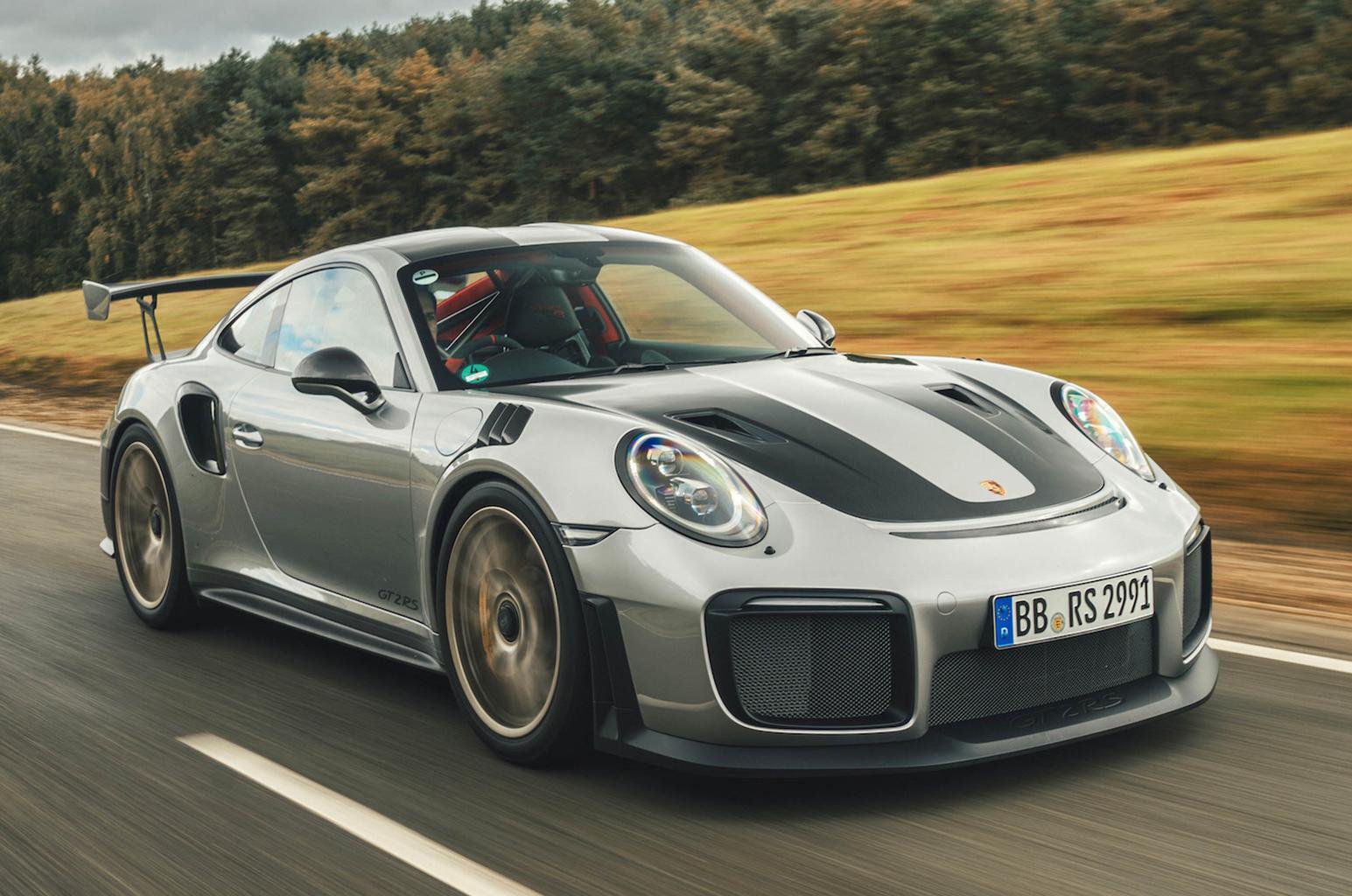 Following recent advances in tyre technology, electronic stability control systems and switchable driving modes, even the most mind-blowingly fast supercars can be tamed by most drivers. Consequently, there are only a handful of cars on sale today with the capacity to really scare you – and this Porsche 911 GT2 RS is one of them.

Stemming from Porsche’s desire to homologate the 911 for racing, the original Porsche 911 GT2, introduced in 1993, was nothing more than a thinly disguised GT2-spec racer. It was based on the already sublime 911 Turbo, but the development team added more power, took drive away from the front wheels and put the car on a strict diet. This simple recipe resulted in one of the rawest 911s ever produced.

It also led to a follow-up and, as fate would have it, 'difficult second album' syndrome. The '996' 911 GT2 was something of a disappointment, with its spikey on-the-limit handling and distinct lack of driver aids quickly earning it an intimidating reputation. Thankfully, the later '997' GT2 and 997 GT2 RS corrected the balance (excuse the pun) by bringing a better-resolved chassis and, for the first time, stability control. 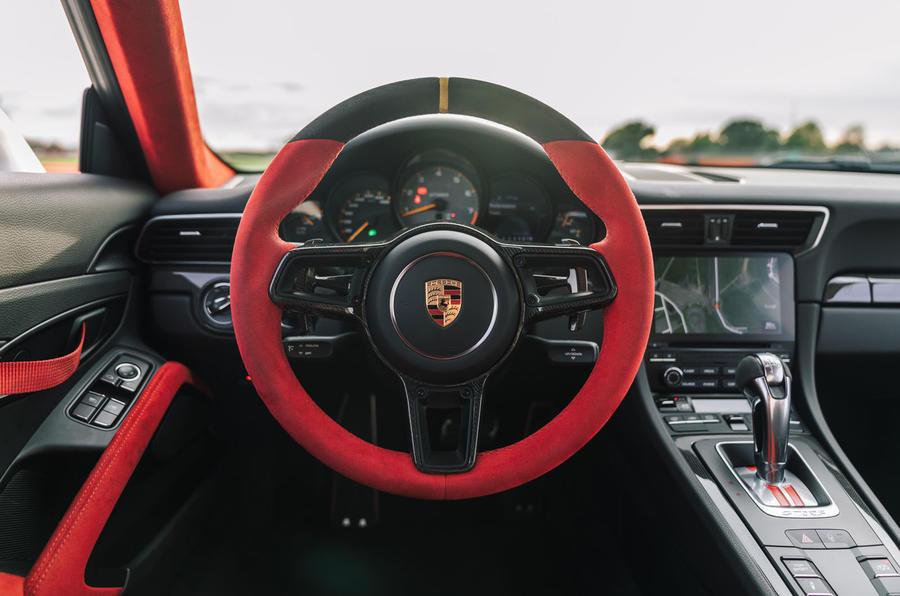 And so to the latest variant. Faithful to the original recipe, this '991' 911 GT2 RS features the same combination of turbocharged flat-six goodness and track-focused handling. But don’t go thinking it's just a turbocharged GT3 RS. Oh, no. It is without question the most advanced and extensively developed road-going 911 in the illustrious 54-year history of this rear-engined sports car.

Under the bonnet (or should that be boot lid?) lies a completely re-engineered version of the 3.8-litre twin-turbo six-cylinder engine used in the Turbo S – and the results are staggering. Producing 691bhp and 553lb ft of torque, the GT2 RS has a whopping 120bhp more than the Turbo S and around 200bhp more than the already bonkers-fast GT3 RS, making the official 2.8sec 0-62mph time and 211mph top speed seeem perfectly plausible.

To contain that atomic bomb of an engine and to ensure that you don’t end up going backwards into a hedge, Porsche has relied heavily on its racing know-how. The suspension settings closely resemble those of its Cup race cars, the front and rear anti-roll bars are made entirely from carbonfibre (if you specify the £21,042 weight-saving Weissach package), and the huge rear wing and wide front splitter generate real downforce; 350kg, to be exact, or 25kg more than a Ferrari 488 GTB. 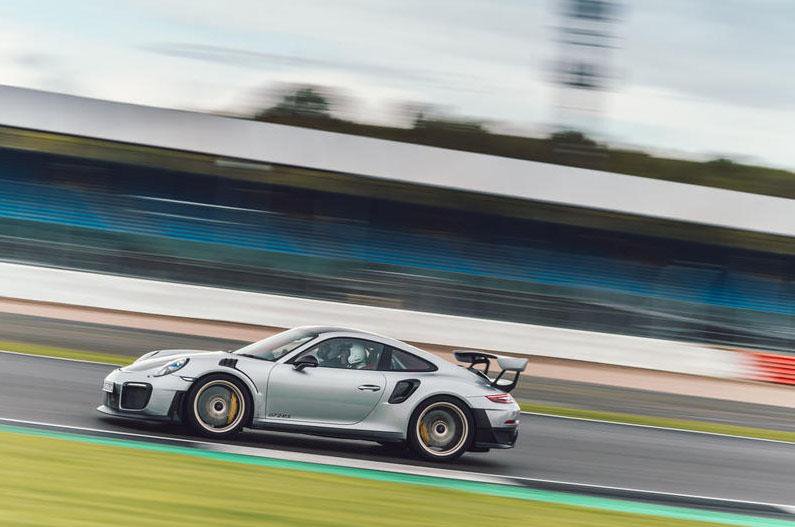 Butterflies in your stomach, sweaty palms and a dry throat – this is what you expect before venturing out onto a race track, not when bumbling through a sleepy Northamptonshire village. And yet the feeling of trepidation is there from the moment you approach the GT2 RS because it looks and feels like a properly intimidating racer.

Fitted with the optional Weissach package – which removes an extra 30kg from the standard GT2 RS – our test car felt like the antithesis of the modern-day ‘usable supercar’, with its interior shorn of any sound insulation, and every unsavoury sound – from the crackling of stones tapping the front wheel arches to the chafing of the carbon-ceramic brakes – making its way into the car.

The lack of refinement is worth it, though, because the GT2 RS has a kerb weight of just 1470kg, putting it only 40kg up on the featherweight GT3 RS, despite the heavier turbocharged engine. The combined effect is a car that has more performance and capability than you can reasonably use on give-and-take country roads. Unless you want to risk a custodial sentence, that is. Gone is the smooth power curve of the Turbo S, replaced with an explosive surge of power at 2,800rpm. It’s an almost surreal level of thrust that doesn’t relent until you reach the engine’s heady 7300rpm redline – and even then, relief is only brief, with the seven-speed paddle-shift gearbox firing through near-instantaneous shifts.

However, with Britain’s B-roads becoming increasingly congested and speed cameras becoming more plentiful, one of the main challenges faced by modern performance cars is to offer driver rewards at legal speeds – something a number of the 911 GT2 RS’s rivals struggle to achieve. Thankfully, creating a highly focused driving machine that still has the capacity to thrill at a slower pace has become something of a Porsche forte over the years and the GT2 RS has, without question, benefited from that knowledge.

It has the same huge wheels and tyres as the 918 hypercar, resulting in remarkable levels of grip that you might expect to dull the on-road driving experience. However, the tactility of the steering and the alacrity of the chassis ensures that you feel truly involved in every step of the driving process. And despite sporting suspension settings that closely mimic those of the Cup race cars, the ride is perfectly acceptable, too, with the GT2 RS exhibiting the kind of fluency usually reserved for McLarens.

And yet, despite this impressive low-speed deftness, there will be many a buyer who will want to explore the limits of their GT2 RS, and the public road – regardless of driving ability – is not the appropriate venue. Therefore, before we hand the keys reluctantly back to the car’s minders, we sneak out onto Porsche’s Silverstone test track for a few quick laps. It’s a demanding circuit with a challenging mix of elevation changes, off-camber corners and hard-braking zones – the perfect place to gauge whether the GT2 RS is capable of thrilling you like its simpler predecessors. 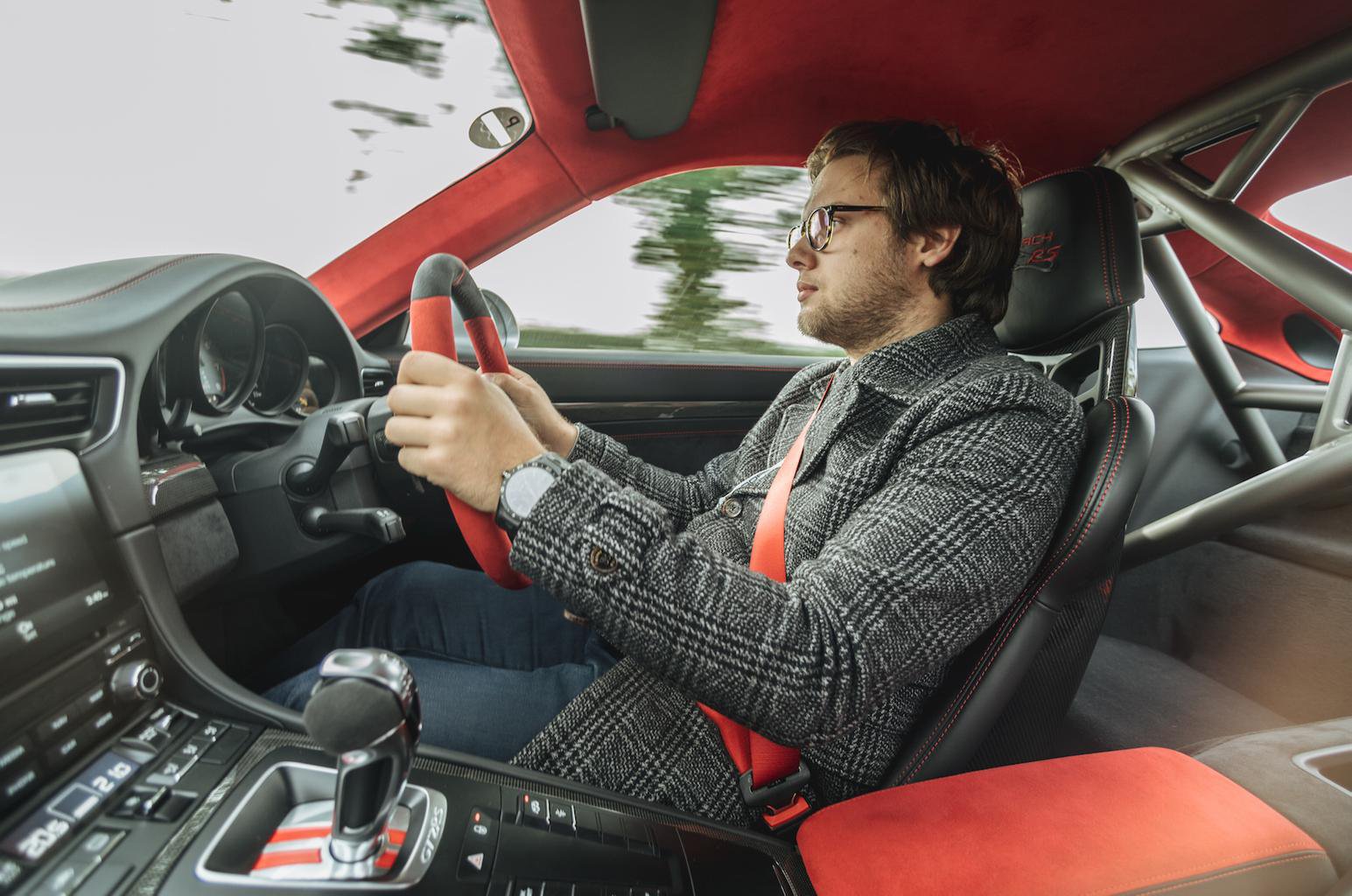 It doesn’t take long to find an answer. After working some heat into the tyres, the resultant bite from the front end is simply astonishing, with the feedback from the retuned electronic steering relaying a constant stream of information back to the driver. Combined with the unique way in which all 911s dig in and fire out of corners, it’s surprising just how quickly you gain confidence.

This naturally results in a decrease in lap times and the car, for the most part, remains rock-solid – right up until the point when you lift off the accelerator a little too hastily mid-bend. The resultant weight transfer is enough to send the GT2 RS snapping sideways like a 911 of old. You see, where other 911s in the range (including the track-focused GT3 RS) allow you to take certain liberties, the GT2 RS is all about lap times. Forget sideways heroics, this 911 is strictly business – a car that, like its predecessors, has a real aversion to sloppy driving.

Ultimately, if you want easily accessible performance, then a McLaren 720S, Ferrari 488GTB or Lamborghini Huracán Performante would be a better bet. But if you like to be a part of the driving process, then the GT2 RS is peerless. 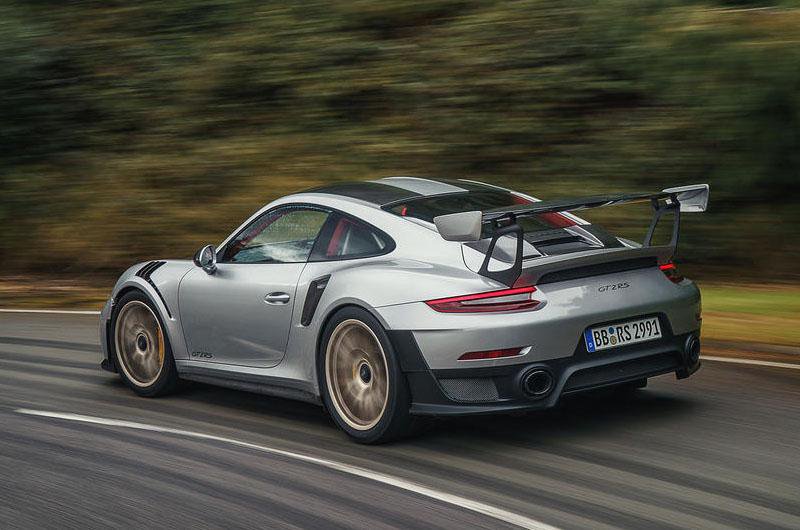 The interior is based on the same architecture as a base 911 Carrera. That means class-leading ergonomics and a level of build quality that smaller production rivals simply can’t hope to match. However, this is a near-£250,000 car (with Weissach pack fitted) and, for that kind of outlay, you would expect supercar levels of extravagance.

Thankfully, Porsche knows how to bring just the right amount of drama to its interiors. Climb inside the GT2 RS's looks like it has been designed by Captain Scarlet, with a 918-esque steering wheel, and the rooflining, seat belts and fabric door pulls sporting a bright red colour scheme. Set against the carbonfibre-backed seats and leather upholstery, the GT2 RS looks and feels a cut above the ‘lesser’ GT3 RS.

As standard, you get the Clubsport package, which includes the aforementioned seats, lightweight door trims and a sports steering wheel. However, we would recommend specifying the £21,042 Weissach package; not only does it improve the car’s performance by significantly reducing weight, but it also brings a titanium roll cage and the provision for a six-point safety harness. Frustratingly, the beautifully formed cage is not race-approved, but it will add another layer of protection if you want to take your GT2 RS on track.