The Nissan Ariya is a high-tech electric SUV with a 310-mile range and futuristic looks...

In order to explain why the new Nissan Ariya could represent a watershed moment for electric cars, we need to have a little history lesson, so pay attention at the back.

In 2006, Nissan changed the game for SUVs with the launch of the Qashqai – the first mass-market family SUV which showed that you could have a high-set driving position and family friendly practicality without the sky-high running costs of a traditional off-roader. Then, in 2010, lightning struck twice with the Nissan Juke – a small SUV which took the Qashqai’s very successful formula, shrank it considerably, and lowered running costs yet again. Both cars, unsurprisingly, have sold like proverbial hot cakes ever since. The point is that Nissan has a habit of shaking up the market when it launches a new SUV, which is exactly why the new Ariya is such big news.

The Ariya is a fully electric large SUV, with styling that’s not changed dramatically from 2019’s concept car of the same name. Slim LED lights and a Nissan badge which lights up to welcome you to the car gives the Ariya a futuristic look, while its sloping rear roofline means this Nissan walks a fine line between traditional and coupe-styled SUV. Some of the concept’s frivolities, though, such as cameras replacing traditional door mirrors, haven’t made it to production. You can bet that the next Qashqai family SUV will take strong cues from the Ariya when it arrives later this year, too. 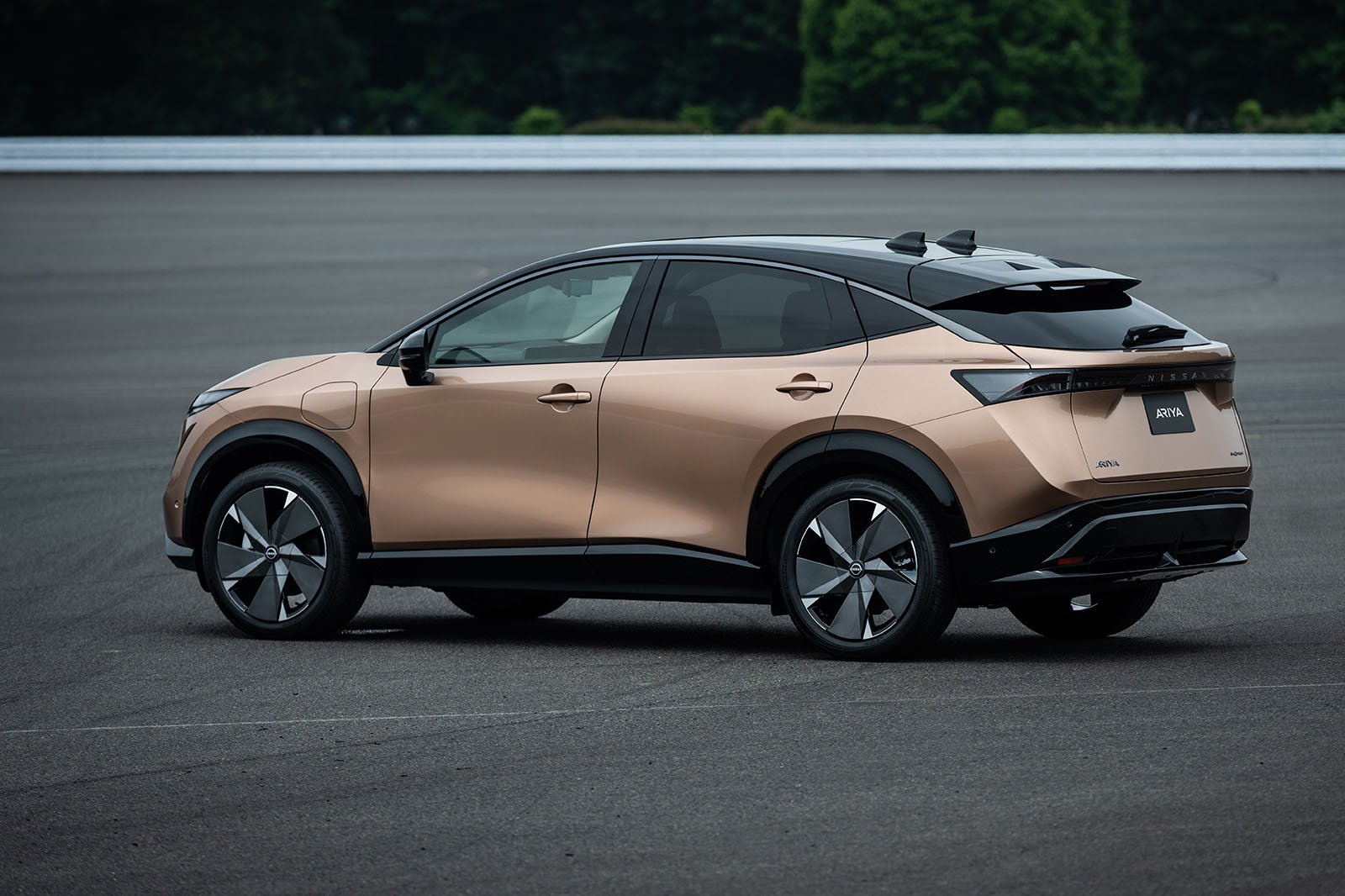 Power comes from two electric motors, but their output, range and how many wheels they drive depends on which model you choose. Even the entry-level two-wheel drive 63kWh model can take you 223 miles between charges and punts out 215bhp, though. There’s an 87kWh version of the Ariya above that, with range increased to 310 miles and power boosted to 239bhp, and then versions of both cars with Nissan’s new e-4orce four-wheel drive system (and lower ranges consequently) too. Then at the very top of the range sits the Ariya e-4orce 87kWh Performance, which offers up 389bhp and a range of 248 miles. This version can also sprint to 62mph in 5.1sec – faster than a Porsche Macan.

In terms of how electric SUV rivals compare, the Ford Mustang Mach E rules the range roost by being able to travel 370 miles between charges, but if you opt for a two-wheel drive Ariya with the larger battery pack, you’ll be able to go further than both the Audi E-tron and Jaguar I-Pace before needing to charge up, while the upcoming Skoda Enyaq will only take you a mile farther down the road with its largest battery fitted. And when you do need to charge, lower-powered versions of the Ariya include a 7.4kW charging cable, while the more powerful versions come with a 22kW three-phase charger. The Ariya can also support charging up to 130kW, but you’ll struggle to find many charging points in the UK capable of supplying that kind of power at the moment.

There’s good news for anyone planning on towing, too, because the Ariya can pull up to 1500kg – the equivalent of a medium-sized caravan.

Buyers can choose from three driving modes, dubbed Standard, Sport and Eco, plus a fourth Snow mode in cars with four-wheel drive. Nissan’s e-Pedal setup, meanwhile, sets the Ariya’s regenerative braking to such a degree that it’s possible to drive using one pedal alone. 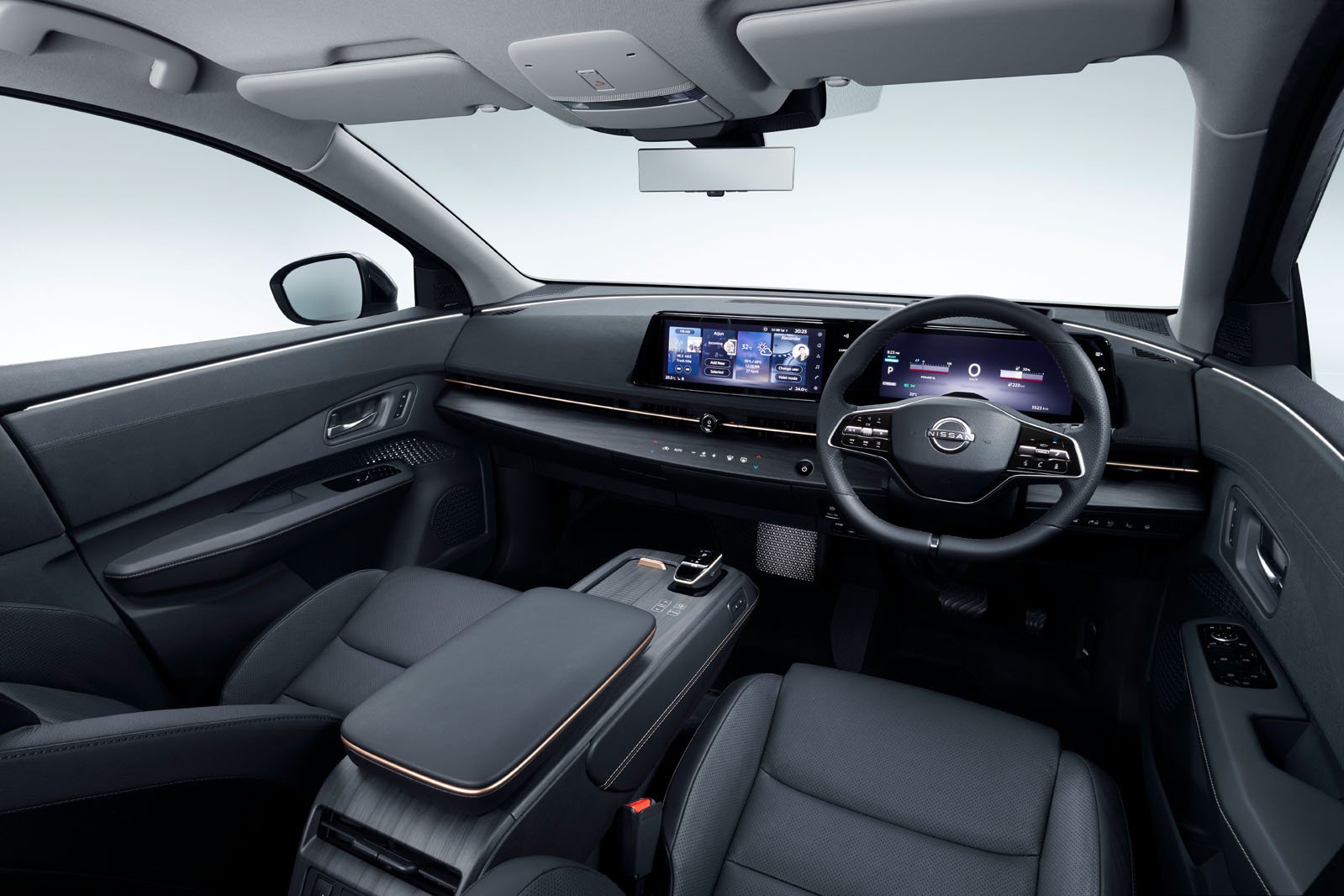 Inside, the Ariya’s futuristic look continues, with very few buttons on the centre console or dashboard. Instead, there are touch-sensitive areas for the climate controls along the dashboard, and these vibrate slightly when you press them. It all looks very 22nd-century, but we think traditional buttons are still far less distracting to use on the move. At least the centre console itself can slide, so the gear shifter and armrest are always where you want them to be. Two 12.3in screens provide virtual instruments and infotainment respectively, and the driver can customise the information shown on either. A large head-up display also shows the most important information, meaning the driver can keep their attention firmly on the road ahead.

The Ariya also includes Nissan’s ProPilot semi-autonomous driving system, which allows the car to control its own speed, distance to cars in front and lane position on the motorway. The system can also guide the Ariya into a free parking space, so there’s no excuse for supermarket scrapes any more. Additional safety features include automatic emergency braking at the front and rear, and a 360-degree camera system.

Just like in Tesla models, the Ariya can receive upgrades wirelessly too, so new infotainment features or upgrades can be supplied to cars without the need to visit a dealer. There’s also a virtual assistant which can recognise natural speech, much like Amazon’s Alexa, and can be activated by saying ‘Hey Nissan’. And just as in rivals, drivers can check the state of the Ariya’s battery, plan routes and set the car’s climate control system using a smartphone app. 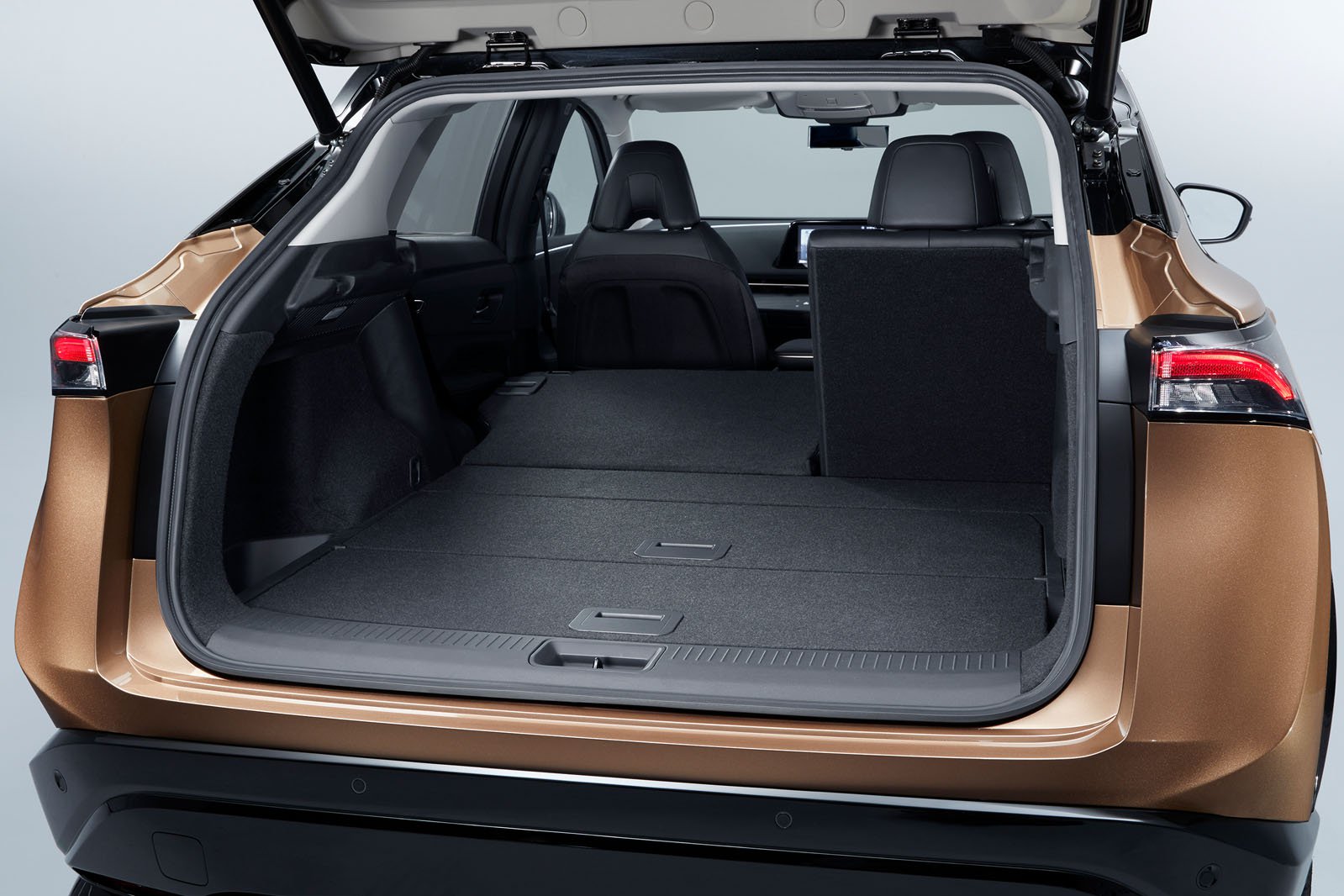 With prices likely to start at around £40,000, not including the government’s £3000 grant for electric vehicles, the Ariya will be competitive against its Ford and Skoda rivals, and far cheaper than more premium options from Audi, Jaguar and Mercedes. It’s worth noting too, that Nissan typically offers strong Target Price discounts, so you could save a pretty penny in time through our New Car Buying service.

And while nothing is confirmed yet, the fact that Nissan builds cars in conjunction with Renault and Mitsubishi means we’re likely to see new electric SUVs from both of those brands before long.