It might look the same, but a handful of tweaks have been made underneath the BMW M135i xDrive, but is this performance hatch better for it? We find out...

When the BMW 1 Series switched from driving the rear wheels to the more conventional front-wheel drive layout in 2019, hardcore car enthusiasts were up in arms. The fear was that not only would the hot version of the firm’s smallest car, the M135i, lose its sonorous 3.0-litre engine, but the ability to be as playful around corners was at stake, too.

All turned out for the best, though; armed with four-wheel drive, the M135i has become a more suitable car for most buyers – it’s just as quick as before, but more usable and predictable, while the smaller 2.0-litre engine is also better on fuel. Nevertheless, never resting on its laurels, BMW has now treated its hot hatch to some subtle updates, keeping it toe-to-toe with the Audi S3 Sportback, Mercedes-AMG A35 and Volkswagen Golf R.

The aim is to give buyers more choice in what flavour they want their M135i to be. Do you want something a bit more visceral but more compromised for daily commuting, or a car that’s still fun to drive but a bit easier on your spine? To that end, the M135i comes either with standard M-Sport suspension, which has been revised for 2022, or with optional adaptive suspension. The engine and gearbox, the exterior looks and the interior have all stayed the same.

Largely the same as before, starting off with the same muscular engine that's effective at getting you up to speed with little hesitation. BMW has turned up the synthesised engine sound being piped in through the speakers, complete with pops and bangs supposedly coming from the exhaust. It’s relatively restrained in comfort mode, but slightly over the top in sport mode.

The suspension on all M135is have been tweaked to reduce how much the steering writhes in your hands as you accelerate – something that’s common on powerful front- and four-wheel drive cars. It works, because the car just goes with little fuss. 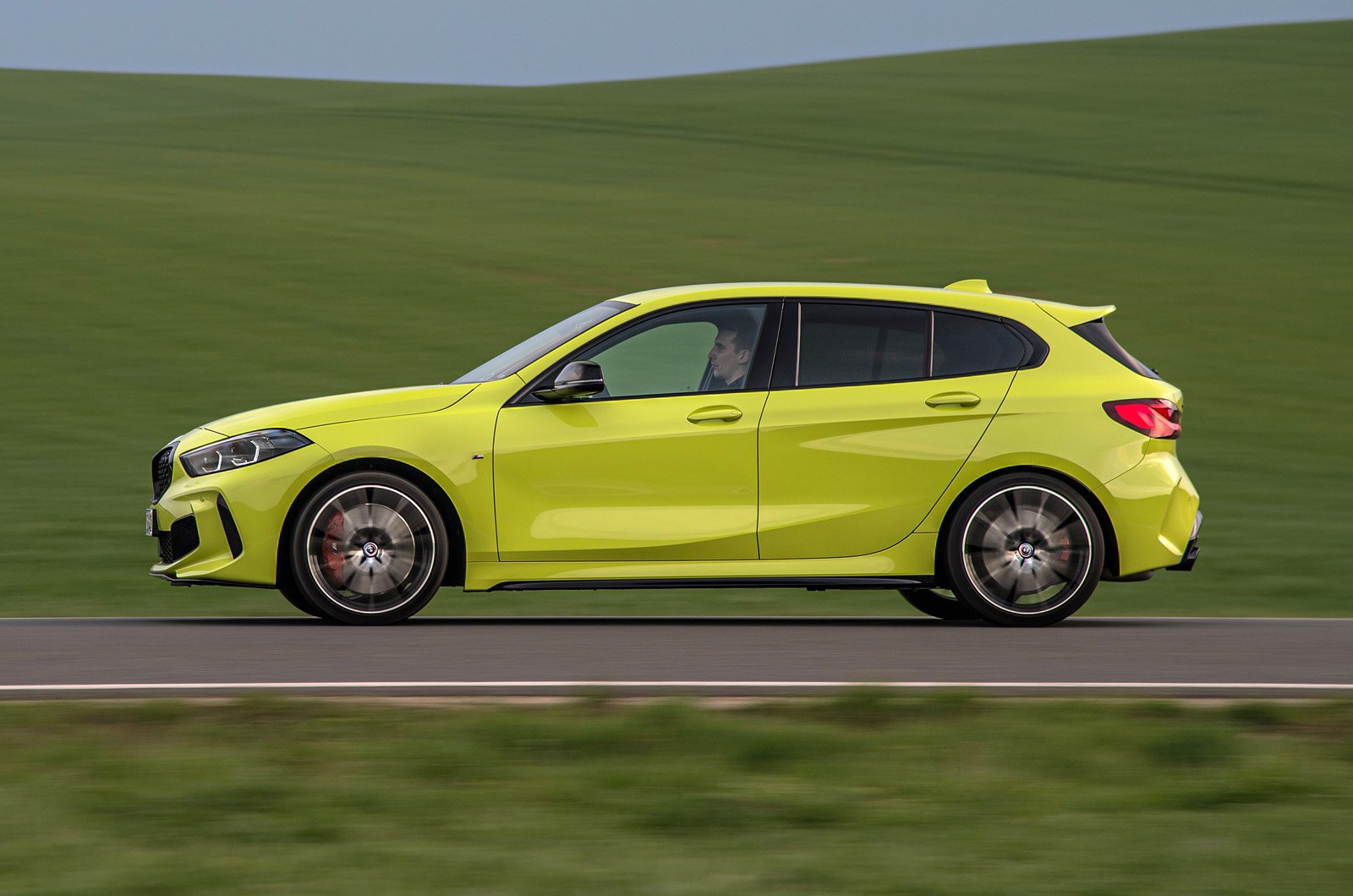 Both versions also come with an improved "torque vectoring by braking" system that can brake an individual wheel to help the car turn in more eagerly, especially as speeds build up. You can feel it working and it’s an entertaining feature.

That leaves the choice between M-Sport suspension or adaptive suspension, the latter costing £500 extra. In its Comfort mode, while there’s a firm edge to the ride, it's very liveable by performance car standards. Sport mode dials up the body control slightly, but it’s not night and day difference. 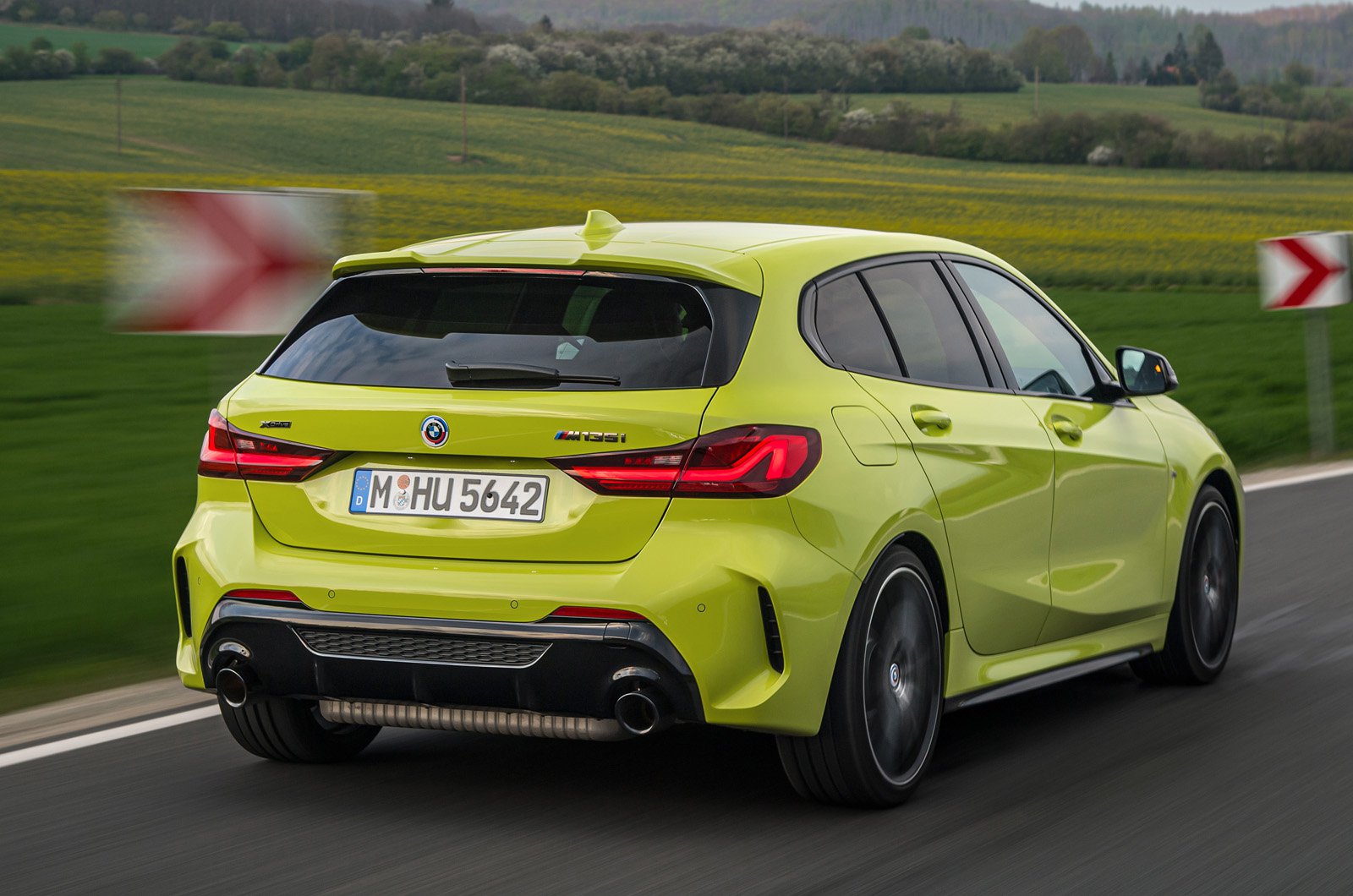 It's the standard suspension, though, that's seen the lion’s share of the changes; it's been made stiffer and set up to provide more grip than before, and the M135i feels more focused and turns in to corners more keenly than before as a result. However, the trade-off is that it never really settles down to a comfortable cruise – and that's on the relatively smooth German roads that we've driven the car on so far. In the UK, the difference between the two is likely to be even more stark.

Despite these improvements, the car's behaviour hasn't been transformed. The BMW M135i is still set up to maximise grip as you attack a country road with vigour, but more enthusiastic drivers may yearn for something that behaves more like the even-hotter Mercedes-AMG A45 S, which will allow the tail end of the car to slide out when provoked. The M135i xDrive is a much more secure – but perhaps less entertaining – kind of hot hatch. 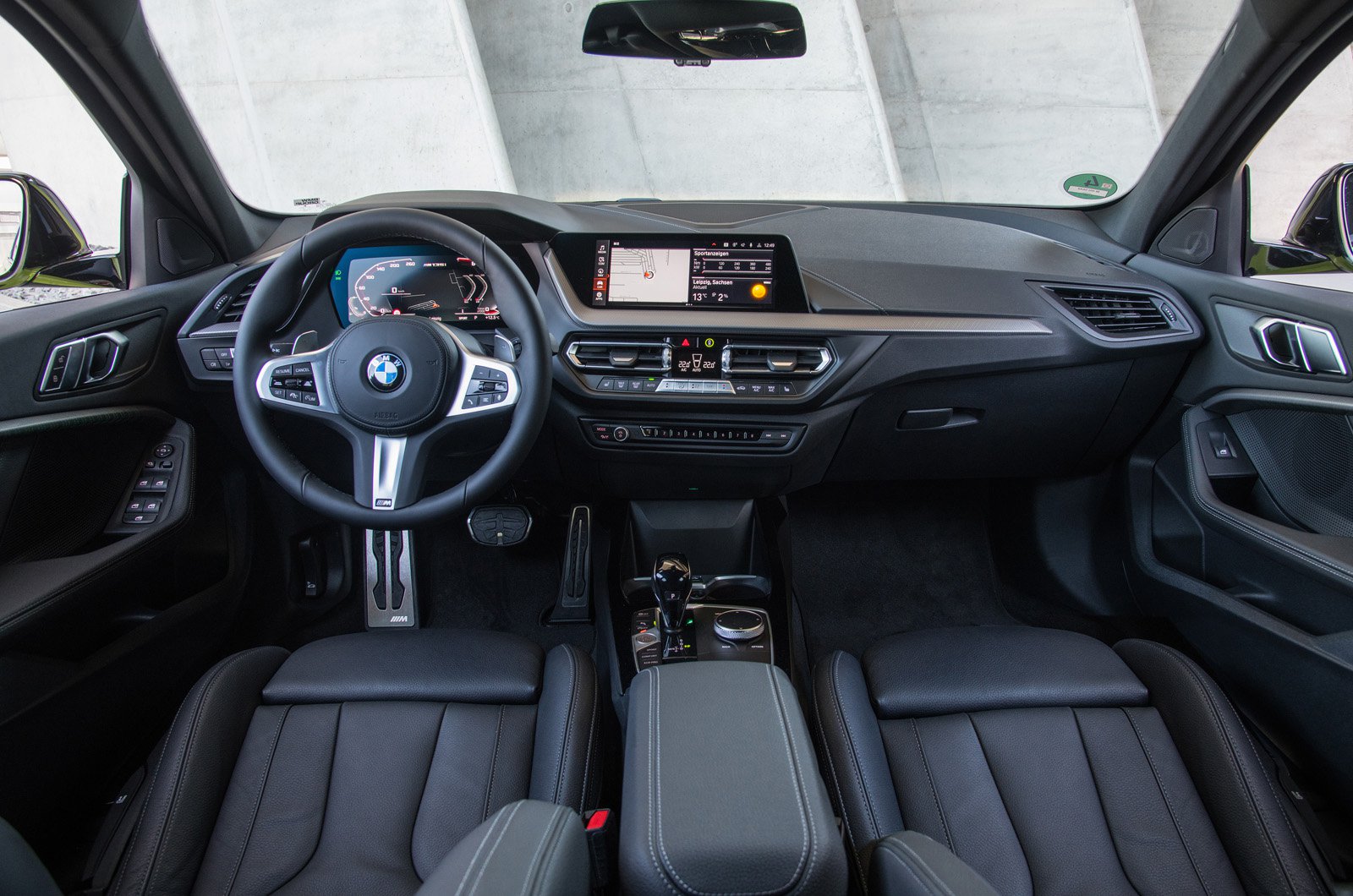 The interior of the M135i xDrive remains the same as before. This isn’t necessarily a bad thing because the BMW 1 Series range is generally a pleasant place to sit in. It may not look as extravagant as higher-spec models of the Mercedes-Benz A-Class, and you don’t get the low-slung seating position of bigger BMWs, but the quality is impeccable and the ergonomics are the best in the business. BMW is one of the only manufacturers to preserve a good selection of physical buttons and a rotary selector for the infotainment system, the latter being a far more intuitive means of control on the move than having to jab at a touchscreen.

Every M135i will get M Sport seats as standard, as well as some blue stitching to mark out it’s a performance model. Boot and rear seat space is generous for the class with four six-footers fitting in comfortably. If you want more detail about the interior, take a look at our main BMW 1 Series review.