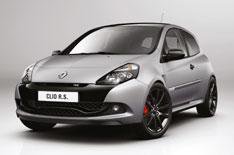 Renault has launched a limited-edition version of its hot Clio, called the Clio Renaultsport 200 Raider.

Just 50 of the Raider cars will be sold in the UK.

Buyers also get the choice of 'Renaultsport Monitor' an on-board telemetry system or Carminat TomTom sat-nav.