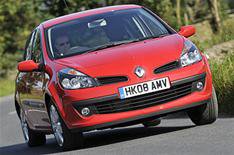 Since its launch in 1990, the Renault Clio supermini has been morphed into a three- and five-door hatchback, an estate car, hot hatch and a saloon, but it has always retained its stylish looks.

The only engine to get an automatic gearbox was the 1.4 petrol. A 2.0-litre petrol was available in Renaultsport form, while a 3.0 V6 model was also made.

In 2005, Renault launched the third-generation Clio. The engine sizes remained the same as in the previous car, although there were improvements across the range for performance and economy.

Again, the Clio was available as either a three- or five-door version, but now an automatic gearbox could be mated to the 1.4-, 1.6- or 2.0-litre petrols. The 2.0-litre was also now available outside of Renaultsport versions.

The new Clio introduced in 2012 features the latest fuel-saving engines. The petrol line-up consists of 0.9-litre three-cylinder and 1.2-litre units, with a single 1.5-litre diesel on offer. All cars are now five doors.

These are the main problems to watch out for when buying a used Renault Clio.

Renault Clio brake problems (2001-2005 cars)
Some Clios built between April and June 2002 had issues with their brakes. There is a risk of brake servo assistance failure due to the incorrect positioning of the air pressure sensor in the inlet manifold.

Renault Clio suspension problems (2001-2005 cars)
A number of Clios built during October 2002 have been known to have faulty suspension. Due to a manufacturing defect, there is a potential risk of the front right or left suspension arm breaking if subjected to an impact.

Renault Clio gearbox problems (2005-2012 cars)
Automatic gearbox issues have been experienced on some Clios built between November 2005 and May 2006. The malfunction can result in either the gearbox switching to manual mode or third gear without driver intervention, or incorrectly displaying its lever position on the dash or displaying a warning light.

Renault Clio brake light problems (2005-2012 cars)
Some Clios built between December 2005 and February 2006 have experienced problems with their brake lights. Its possible for the brake light switch to melt due to grease in the circuit switches overheating.

Renault Clio valve problems (2005-2012 cars)
A number of Clios built between September and November 2010 might have problems with their engine's valves. In the worst case, this could lead to the destruction of the engine.

These issues should have been fixed by Renault, so make sure the work has been done before you buy.