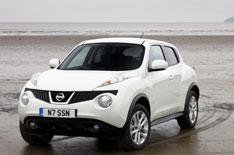 Nissan says it has improved the fuel economy and carbon dioxide emissions of its Juke crossover.

The 1.6-litre petrol version now averages 47.1mpg, an improvement of 2.3mpg. It also emits 139g/km of CO2, an 8g/km reduction. This means the car now sits in VED Band E, so owners will pay 15 a year less in road tax than owners of the current version.

Similarly, the 1.5-litre diesel version's fuel economy improves by 2.2mpg to 57.6. It also drops down a car tax band to VED Band D because emissions are now 129g/km.

Nissan says the improvements have been made by revising the car's gear ratios. One criticism of the petrol version was that the gearing was too short, which made for high revs and lots of noise on the motorway. This tweak to the ratios should therefore improve the car's refinement.