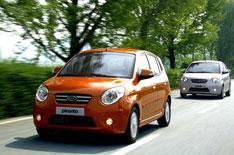 Kia is recalling 486 Cee'd models for checks on the brakes, along with 6585 Picanto superminis because of a possible fuel leak.

The manufacturer says the brakes on the Cee'd fitted with stability control might suffer from insufficient braking effort from the master cylinder. Cars built between April 1, 2008 and March 30, 2009 are under investigation.

Kia has also discovered that the fuel filler on its Picanto supermini could have become damaged by de-icing fluids. It says a small number of fuel leaks have been reported. Cars built between November 2009 and February 2010 are affected.

Kia is contacting all owners about the potential faults and will carry out all repairs free of charge.